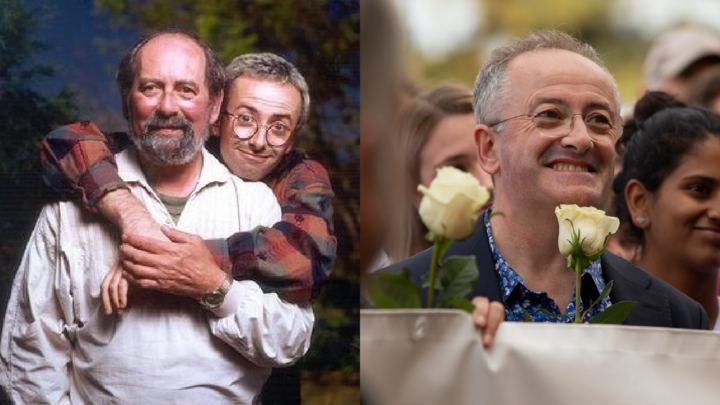 Andrew Denton knows all too well the pain of watching a loved one suffer through a slow and tortured death, and he’s determined to help others avoid the traumatic experience.

Kit, who was a well-known broadcaster in Australia, had been living with several ailments leading up to his death, including a spinal injury from a parachuting accident when he was in the army and severe arthritis throughout his body. He also had a heart attack in his 50s.

Yet it was in the final days of his life that Kit really started to suffer in a horrific way.

“For his last three days he was in hospital,” Denton tells Starts at 60. “It was a good hospital … I don’t suggest they weren’t doing their best, but their best wasn’t good enough, so he was given as much morphine as they felt was appropriate.

“My sisters and I watched him in those last few days and there would be spasms, waves of pain going through his body, he would be groaning and twitching, and it didn’t look peaceful. My last image of my father as he died is profoundly shocking to me and I’ll never lose it.”

Having never experienced the death of a close family member before, Denton accepted his father’s demise as ‘normal’ and didn’t come to terms with the trauma of seeing his father suffer through his final breaths until years later.

“It was very disempowering and we didn’t talk about it for many years,” Denton says. “I think we thought ‘well, that’s the way it goes’. We now realise of course that it doesn’t have to be the way it goes. And look, because I’ve talked to so many families that have been through this, I’ve realised what Dad went through was at the relatively low end of the scale.”

It was this harrowing experience that fuelled Denton’s campaign to change the laws on assisted dying for the terminally ill in Australia.

His efforts saw him launch the popular podcast Better Off Dead in 2015, which prompted the passing of Victoria’s voluntary assisted dying (VAD) law, which allows anyone suffering from a terminal illness with less than six months to live the right to end their life legally.

Since then, Western Australia and Tasmania have both passed VAD laws, with the new laws coming into effect from July 1 this year in WA, and in the next 18 months for Tassie. Meanwhile, Queensland and South Australia — and possibly New South Wales — are expected to vote on the issue later this year.

Now, the legendary television and radio presenter is back for season two of Better Off Dead. While the first season saw Denton spend 18 months crisscrossing Australia and travelling the world, talking with doctors, nurses, politicians, priests, lawyers, opponents of assisted dying, as well as the dying and their families, season two looks at what happened in Victoria after the VAD legislation came into effect in June, 2019.

More than 130 Victorians applied to end their lives in first six months of state’s assisted dying laws, far more than authorities had expected. Some weren’t eligible based on their medical condition or because they weren’t Australian citizens, but 50 successfully used the new law to legally end their lives; of those 50, 43 self-administered the medication while nine had their doctor administer the drugs.

“For all the good that medicine and palliative care can do, they are people who can’t be helped, and we need to offer a better choice,” Denton says.

Asked whether his father would’ve used the assisted dying law had existed at the time, Denton replied: “I think he would. In fact, I know he would.

“However, I think wanting to go down the path and actually going down the path are not always the same thing. It’s a difficult law and it takes a lot of courage and determination, and even when you’ve had the medication, that doesn’t mean you’re going to take it, it’s knowing you have that control.”

While the story in Vitoria is one of success for those who advocate for euthanasia, Denton says there’s still more work to be done.

“Dying is the final act of our lives,” he says. “We don’t want to give it over to other people or machines that go ‘bing’. We don’t want to be drugged while our family sits around waiting. Most people want to die as who they are, not as a shell leaving a terrible memory for the people they love.”