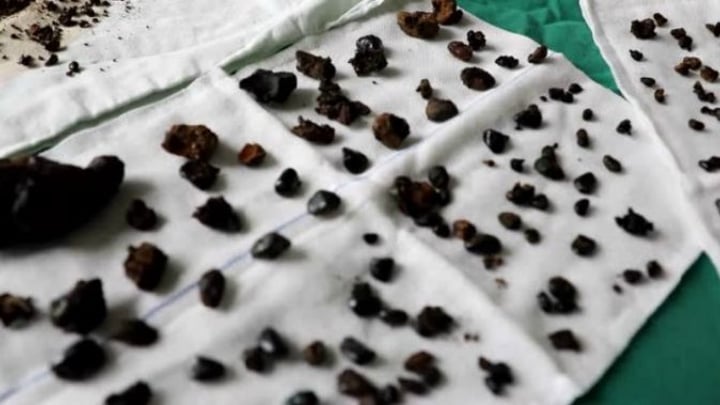 Just some of the gallstones removed from Mrs Chen. Source: Hezhou Guangji Hospital

Sometimes the truth really is stranger than fiction.

Just as some would’ve been staggered to believe that it was possible for a woman to have 27 disposable contact lenses trapped in her eye, had it not been reported by a credible medical journal, this new case only seems feasible because it’s been reported by an actual hospital.

In this case, it’s the Hezhou Guangji Hospital in China, which reported that a 45-year-old woman had been found to have a remarkable 200-plus gallstones in her gallbladder and bile ducts when doctors operated on July 15. One or even several gallstones is the norm.

The woman, identified only as Mrs Chen, told doctors that she had been experiencing abdominal pain for as many as 12 years and had been referred for surgery some time ago, but had put off having it done due to a fear of the operation.

After the operation that uncovered more than 200 gallstones –  ranging what the hospital described as the size of an egg to the size of a small bean, along with some “sediment-like gravel” – the hospital’s general surgery director Quanwei Wei said that the huge number of stones was rare.

The doctor suggested that the woman’s poor diet may have been to blame for the unusual build-up, because Mrs Chen had told him that work had prevented her from eating breakfast for the past eight years and that she preferred to drink “oil tea”, a regional favourite that’s prepared by frying tea leaves with garlic, salt, chilli and other spices in a wok, before the mixture is pounded with a pestle and boiling water added, along with puffed rice, peanuts and other herbs, for dinner.

“Maintaining regular eating habits and a balanced diet is the key to prevention [of gallstones],” the hospital quoted the doctor as saying.

WebMD says that gallstones are crystal-like deposits , usually made of hardened cholesterol, that develop in the gallbladder and which people commonly have without being caused any discomfort. However, a gallstone can move from the gallbladder into a bile duct, lodging in the duct and causing abdominal pain and possibly nausea, indigestion or fever.

It’s not known exactly what causes gallstones to form, although having an excess of cholesterol or bilirubin (a chemical produced by the liver)  have been posited as possible explanations.

Have you had gallstones? What was your experience like?