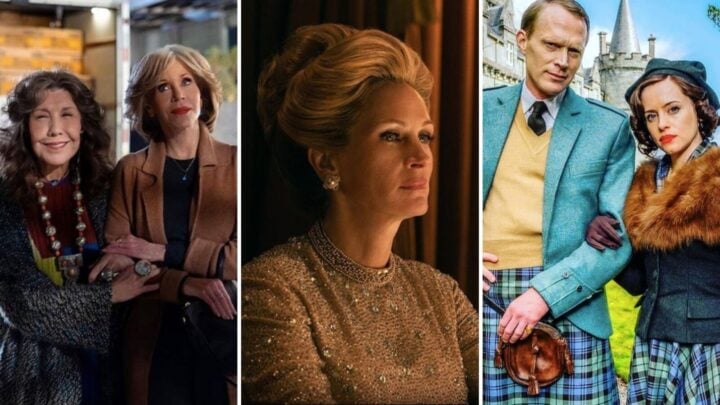 With new episodes and shows coming out this month, you definitely wont be short on entertainment. Source: Instagram @graceandfrankieofficialfans / @dressfancypodcast / @ gaslitstarz

With so many new shows and movies being released in the next couple of months, there’s no doubt you’ll be enjoying endless hours of entertainment. However, if you’re still scrambling to find something to watch then this curated guide gives you the best series and movies coming in the month of April and May that is well worth marking your calendars for.

Starring Emmy-nominee Paul Bettany and Emmy-winner Claire Foy this mini-series follows the high profile real-life story of the Duke and Duchess of Argyll as they go through one of the most public, and scandalous, divorce cases in 1960s Britain.

This three-part drama is all about the toxic truth of divorce and relationships while aiming to explore the social and political climate of postwar Britain while looking at the country’s attitude towards women.

A Very British Scandal will be available for streaming on Amazon Prime starting on April 22.

Starring Academy Award Winners Julia Robers and Sean Penn, Gaslit focuses on the Watergate Scandal and shines a light on the untold stories of Richard Nixon’s subordinates. This series specifically follows Martha Mitchell, the unlikely whistleblower who was also broke the scandal wide open, ultimately causing her to fall victim to a vicious White House smear campaign that was started by her own husband, Attorney General John Mitchell.

Watch this political thriller on Amazon Prime on April 24.

Mark your calendars because the Crawley family is back this April for the second instalment of the globally acclaimed British television series and this time, the family is embracing the 1930s.

Downton Abbey: A New Era will still feature the return of the original cast members like Hugh Bonneville, Laura Carmichael, Jim Carter and Michelle Dockery but also marks the debut of Hugh Dancy and Dominic West. The film sequel will also be “Dowager Countess of Grantham’s last hurrah”, as Dame Maggie Smith makes her return as Violet Crawley. She will be joined by French actress Nathalie Baye, who plays “an old friend of Violet’s who comes to visit.”

The film’s scriptwriter Julain Fellowes has described the new film as an “unashamedly feel-good movie,” while Jim Carter says fans are in for a lot of fun explaining that the script is “very funny.”

If you’re looking to refresh your memory on all the Crawly family drama, Downton Abbey is available for streaming on Netflix now.

Available to watch in Australian cinemas on April 28

The longest-running Netflix original series is finally coming to an end. First premiering in 2015, this endearing comedy follows the story of Grace Hanson, the sharp-tongued, retired cosmetics mogul, and Frankie Bergstein, the quirky art teacher. Their lives turn upside down when the two find out that not only are their husband’s business partners, but they’ve also become romantically involved with one another.

This last season has been split into a two-parter with the first four episodes currently available for streaming on Netflix, while the remaining twelve are expected to drop later this month.

The first four episodes of Grace and Frankie season 7 are now available to watch on Netflix.

The Mystery of Marilyn Monroe: The Unheard Tapes

For over a decade, Marilyn Monroe was one of the biggest stars in Hollywood. The actress, singer and model was seen as the ultimate bombshell, with her sudden and shocking death at 36 still haunting the industry to this day. Now, Netflix is taking a look behind the scenes of the late starlet’s life to see what happened with a new documentary, The Mystery of Marilyn Monroe: The Unheard Tapes.

This new documentary explores the mystery surrounding the death of the movie icon revealing previously unheard interviews with her inner circle. Viewers can expect to hear recordings from back in the day from those closest to Marilyn.

The Mystery of Marilyn Monroe: The Unheard Tapes will be available on  Netflix on April 27.

Guaranteed to give you an adrenaline rush, Top Gun: Maverick will put you on the edge of your seat. In the sequel to the 1986 action original action movie, Tom Cruise is back as Pete “Maverick” Mitchell who, according to Paramount Pictures, finds himself “facing an uncertain future while being forced to confront the ghosts of his past.”

Top Gun: Maverick will be released in cinemas on May 27.