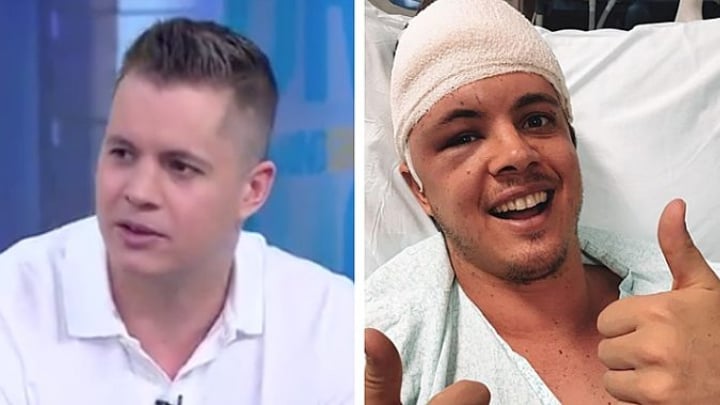 Johnny Ruffo could be months away from getting the all clear! Source: Twitter/The Morning Show and Instagram/Johnny Ruffo (right).

Johnny Ruffo has revealed he’s finally gone into remission, 14 months after he was first diagnosed with cancer.

Speaking in an emotional interview on Channel 7’s The Morning Show on Tuesday, the former X Factor Australia star revealed the amazing moment he was told by doctors he could be just two MRI scans away from getting the official all clear.

“Not even a week ago, I went in for my monthly check-up and I got some great results,” he said on the show. “The oncologist said that I’d finished all of my chemo and I was in a state of remission. I still need to go in every three months for MRI checks, but providing the next one or two are good I’m in the clear.”

The hosts were clearly overwhelmed with his announcement as they said: “That’s amazing news.”

Johnny added: “I’m very very happy about it. I’m actually relieved, it’s been a really long journey and quite difficult at times.”

It's been 14 months since @JohnnyRuffo was diagnosed with a brain tumour — and after a long recovery, he's in remission! 🙏 #TMS7 pic.twitter.com/77LswTaFfR

While he looked over the moon with the news, flashing a beaming smile on camera, Johnny said he is holding back from celebrating early – still concerned that the cancer may return.

“You just never know, until you get that all clear you never truly know,” he added. “It’s a pretty rocky road and it’s not easy at times. I’ve been very fortunate to have a great support group around me.”

Admitting he’s reluctant to use the word remission given what he’s been through, he said his biggest relief was not having to have any more chemo – something he said had been very “rough”.

The singer’s life was turned upside down in August of last year when what he believed to be a migraine turned out to be a very serious brain tumour.

He recently spoke candidly to The Daily Telegraph about how he survived some of the lowest points during his battle with the disease.

“There have been many times I’ve been down,” the 30-year-old said. “I had thoughts ‘what if I wasn’t here anymore’ and ‘what’s the point of being here’, things like that.”

The Aussie star said that he worked his way through those challenging months by reaching out to others, adding: “I don’t think I’d ever act upon those thoughts but this is not just about me, there are people out there who would potentially act upon them, so the message from me is it’s OK to talk to people and to open up and seek help.”

Meanwhile, speaking with Who magazine’s podcast earlier this year, the actor recalled the terrifying night on August 6, 2017, that his loving girlfriend Tahnee Sims saved his life by rushing him to hospital after he complained of a painful migraine.

Read more: ‘I’ve been down’: Johnny Ruffo reveals how he survived his cancer battle

While doctors initially told Tahnee to go home, believing Johnny simply had a bad migraine, she woke the next morning to devastating news as they revealed he had slipped into a coma due to a fist-sized tumour in his brain that may have been growing for up to 10 years.

Explaining what he was told at the time, he added: “Basically [the tumour was] the size of my first in my frontal lobe, so all that pressure was being put on my brain which explains the sever headaches and blackouts.”

Do you have a message for Johnny?