Cataracts: Causes and treatments for the most common eye condition 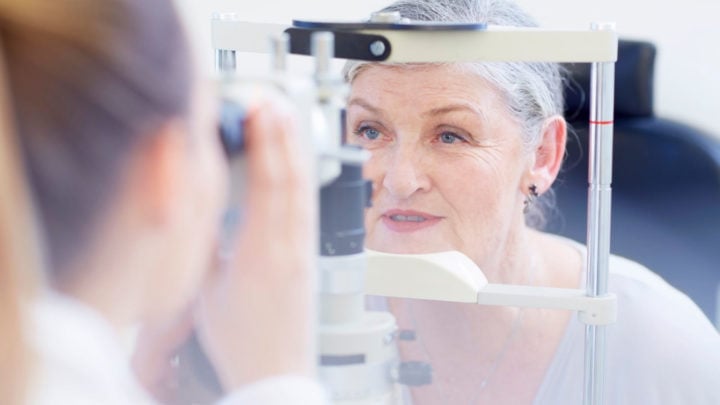 More than 1.5 million Australians over the age of 55 have cataracts. Source: Getty

Cataracts are the most common cause of visual impairment among older Australians – more than 1.5 million people aged 55-plus have them – because they’re a natural part of ageing

But other than knowing that cataracts can appear as a cloudiness in the lens of the eye, many people don’t know why cataracts form or how they can be treated.

In simple terms, having a cataract or cataracts (they can appear in one or both eyes) is often compared to looking through a foggy window. The most common symptoms of cataracts include blurred vision, sensitivity to light and poor night vision.

These symptoms can vary from person to person and someone with cataracts may not experience all of them. Key signs to look out for include:

That cloudiness or fogginess cataracts cause – some people describe it as it like having a film over the eye – occurs because the cells and proteins in the lens have degenerated over time, which is why ageing is the biggest risk factor for developing cataracts.

Vision Australia optometrist Louise Maher told Starts at 60 that 50 per cent of the population develop significant cataracts by their 70s. But cataracts are rarely visible to the naked eye and don’t cause pain, redness or tears, and because they usually develop over several years, most people don’t notice any immediate impact on their vision.

The cloudiness that cataracts cause in the lens of the eye increasingly blocks light from passing through the lens to the retina, however, until vision is noticeably impaired.

There are three major types of cataracts. The first, called nuclear cataracts, are at the centre of the lens and are usually associated with ageing. Cortical cataracts affect the outer shell of the lens, while posterior sub-capsular cataracts occur in the back of the lens

Although cataracts can form as part of the ageing process, like many other conditions, there are other factors that can contribute to the eye condition or make it worse.

People who have spent a lot of time in the sun without eye protection, have a diet low in fruits and vegetables, drink heavily or who smoke are more likely to develop cataracts.

A family history of cataracts may also make you more susceptible to the eye condition, as can suffering from vascular diseases such as coronary artery disease or high blood pressure, diabetes or other eye conditions such as glaucoma and myopia. In some cases, eye injury or the use of some medications may increase the risk of developing cataracts.

An optometrist can usually identify cataracts by doing an eye examination, and if the condition isn’t serious, they may recommend doing nothing while they monitor whether the cataracts progress. They may also suggest an updated glasses prescription.

But if the cataracts are advanced, it’s likely surgery will be necessary to replace the cloudy lens with an implant called an intraocular lens – effectively an artificial lens.

“It’s the most common elective surgical procedure in Australia,” Maher explained. “It’s also one of the safest procedures to have, so it’s nothing to be worried about.”

Before surgery, the optometrist will usually refer the person with cataracts to an ophthalmologist for a dilated eye exam, which involves dilating the pupil with eye drops, then examining the back of the eye with a special microscope called a slit lamp. This confirms the cataracts diagnosis and helps determine the right artificial lens for the patient.

Cataract surgery is usually done under local anaesthesia but in an operating theatre in a hospital or day procedure unit rather than at the ophthalmologist’s consulting rooms or an outpatient unit.

People who have cataracts in both eyes will need to have them treated separately, to allow one eye to heal before the other is treated. This helps cut the risk of a post-operative infection spreading from one eye to the other.

During surgery, the ophthalmologist uses ultrasound to break down the cloudy lens, which is then vaccumed out of the eye through a tiny incision in the eye. The surgery usually only takes about 15 minutes – more complex cataracts can, however, take longer – and people typically notice a an improvement in their vision within a few days, with their vision stabilising within four to six weeks.

“The things you can’t do are vigorous exercise, heavy lifting, swimming, submerging your head under the water,” Maher noted on the recovery process. “Generally, you can drive if your vision is good enough after 24 hours.”

While there isn’t much older Australians can do to slow down the formation of cataracts once it begins, quitting smoking, controlling diabetes and wearing sunglasses is important to maintaining good eye health.

“People should get their eyes tested every year, especially if they have a family history of eye disease and cataracts,” Maher concluded.

Medicare will cover the cost of an eye check every three years for people under the age of 65 or annually for people who are 65-plus, at the optometrist of their choice.

Have you had cataracts? Did you find surgery worked for you?