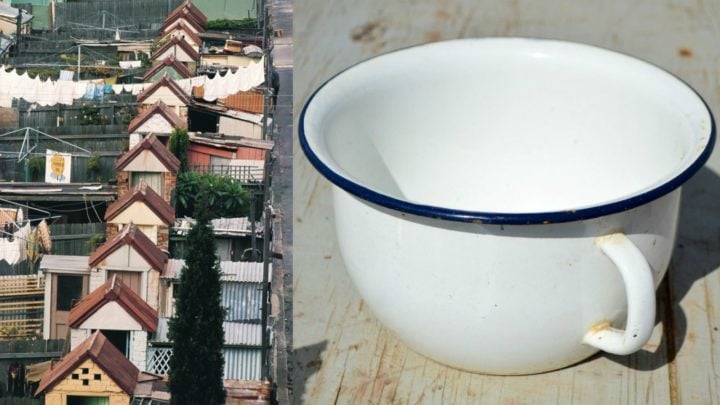 A trip to the outdoor dunny at night was never enjoyed, so sometimes a chamber pot was used instead. Source: Getty

A trip to the toilet in the middle of the night during winter is never a fun experience, the tiles are freezing cold and touching your bum to the seat is like sitting on an ice block. But, it’s a hell of a lot better than what Baby Boomers experienced growing up, with many required to venture to the outdoor dunny to do their business.

From the late 1800s to the late 1960s having an outdoor toilet in many parts of Australia was the norm and there was no such thing as an indoor loo. So, instead of slipping out of the bed and turning on the bathroom light, people had to stumble into the dark with a torch in hand while half asleep to find the outside lavatory, or thunderbox as it was also known. But, that wasn’t the worst of it – sometimes you’d even be welcomed to the toilet by a spider or some other creature which had been hiding under the seat.

It certainly wasn’t an enjoyable experience for adults and kids alike but, if you were busting and couldn’t hold on until the morning, it had to be done. With this wonderful outdoor invention also came the “dunnymen”. That’s right people were employed to empty the waste filled toilets each night – or sometimes each week in regional areas – not a fun job. Because the toilets weren’t attached to a plumbing system the contents had to be emptied, so the dunnymen would run into backyards, grab the heavy can full of human waste and dispose of it appropriately.

Thinking back on it today the outhouse seems disgusting, but it has intrigued some, and in 2017 Queensland’s Urban Utilities actually put a call out to residents to see if anyone still had one in the backyard that could be restored as part of a “looseum”. And if they didn’t have the actual loo still standing, photos and memories of using the outdoor dunny were also asked to be contributed.

“The backyard dunny is a great Aussie icon and we’re really keen to see this important piece of history preserved before it disappears,” Queensland Urban Utilities spokeswoman Michelle Cull told the ABC. “We’re keen to know where the last remaining dunnies are and any funny stories people might have about braving the elements and warding off the creepy crawlies.”

And there certainly are some interesting stories from those years ago. Many Aussies contributed their memories to the looseum, from the trips the dunnymen made to the quick night time runs to do their business.

“I can remember on ‘dunny day’ after the fellow had done his pickup with all the pans loaded, the truck would go down Main Avenue and do a sharp right-hand turn to Tandoor Street,” one person said. “For the uninitiated if the driver took the corner too fast all the pans would fly out the door. We would often hear the driver scraping up the contents with the lids and my family would have a good laugh feeling a little sorry for him.”

“From 1976 to 1980, I lived with my parents and three brothers in a railway house,” another said. “Until then I had lived in several western Queensland towns, always with an inside toilet, but at Dinmore we met the thunderbox. The man only came to empty it weekly, so my brothers needed to do ‘number one’ in the yard to avoid dangerous overfill situations! My mother grew up in a small country town and told of a school outhouse being pushed over when another student was taking what was considered too long.”

However, there was another option to going to the toilet in the middle of the night if you didn’t want to brave the outdoor loo – the chamber pot. It was usually kept under the bed, but sometimes a little cupboard beside the bed housed this vessel. Some were earthenware, but a more basic enamelled steel model also existed.

Peeing into a pot doesn’t sound all that bad, and certainly better than fighting off the creepy crawlies in the outhouse. But, if you were the one that had to empty it in the morning, you’d disagree. It was certainly not a job that people put their hand up for, but everyone had their go.

Did you have an outdoor toilet and chamber pot growing up? Do you have any funny memories of them?