‘My parents sent me messages from beyond the grave’ 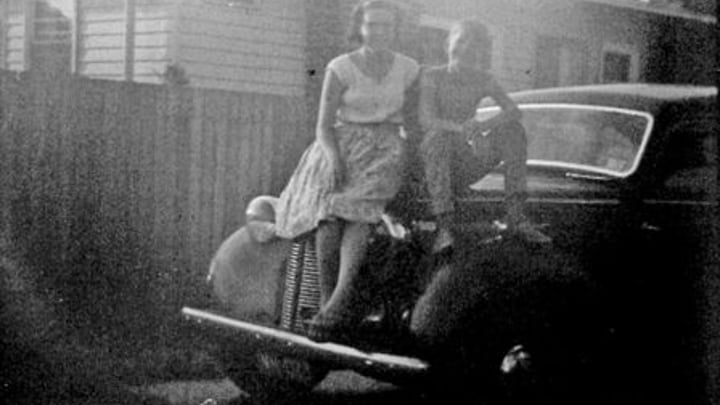 Marnie says the negative of this photo was her father's gift. Source: Marnie Rogers

My dad died 15 years ago, my mum nine months later. I was devastated and didn’t cope at all.

Many years before he passed, Dad and I had been talking about the afterlife and we laughingly made a deal that we would try to contact each other. In those hard months after they died I would often feel my dad ruffle my hair and it gave me comfort.

About two years after they passed, I heard that Charmaine — a spiritualist who won the television program The One — was going to be at a venue about 80 kilometres from where I lived so I decided to go.

There were about 150 people at the venue on that day and about half way through, Charmaine suddenly pointed at me and said “Oh my God, you are so much like your mother”. Well, I had to laugh, because that was always mum’s biggest brag. She’d always be saying that various people she knew asked if we were sisters because we were so much alike. She liked to think it was because she looked so young.

She also asked if I restored old furniture. When I said no, she told me Mum was showing her that I was polishing an antique sideboard. That was the moment I knew my mum was still with me. I have a reproduction colonial style sideboard with my parent’s photos at each end. Whenever I am dusting or polishing, as I lift up their photos, I tell them all the news. Mum was letting me know she heard me.

Charmaine asked me who ‘Pat’ was, as there was a Pat with Mum. I couldn’t think of a Pat.  Spiritualists often hear the consonants clearer than the vowels so she would have heard the ‘P’ ‘T’ sound. I realised later this was probably my Dad. His name was Peter, but Mum always called him Pete. I wondered why Dad hadn’t said anything even although he was apparently with Mum — though I could imagine him saying that, as usual, he couldn’t get a word in edgewise.

About 10 years later, Dad came through on his promise. I hadn’t seen my siblings since our parents died as they live interstate, but we promised Dad that we would all try to get together for the 50th anniversary of our arrival in Australia.

My brother said he was coming to Victoria via the Great Ocean Road and I told him I had not travelled that road in 50 years – not since we did it together as children in Dad’s first old black car. He told me he had no recollection of the car, or the trip.

Then a few days later, the oddest thing happened. I was searching for a missing document in my filing cabinet and, thinking it may have gone down between the hanging folders, I started searching between them and spotted a photo negative lying in the bottom of the drawer. Curious, I picked it up and held it up to the light. It was a black and white picture of my brother and me sitting on that very same old black car.

Bear in mind I had moved house twice in the last 10 years and each time the filing cabinet had been emptied and refilled. My filing cabinet had never been at my parent’s home and nothing of theirs had been in it. I did not even know any photos existed from that time and I had certainly not seen the negative.

Yet here, just days after discussing it, and a few days before our 50th reunion, a negative of Dad’s car from 50 years ago turns up in the most unexpected place. My dad was acknowledging our promised reunion and making good his own promise to me.

I know that the sceptics will say it is coincidental — we hear what we want to hear, see what we want to see and believe what we want to believe and that may be true. To me those signs are real tangible proof that those who pass away are still with us and for me at least, that makes grief and loss much easier to bear.

Do you believe your loved ones can contact you after they have passed? Have you ever felt you’ve received a sign from a dead loved one?