‘The best recipe I have for using leftover bread – and it’s super easy!’ 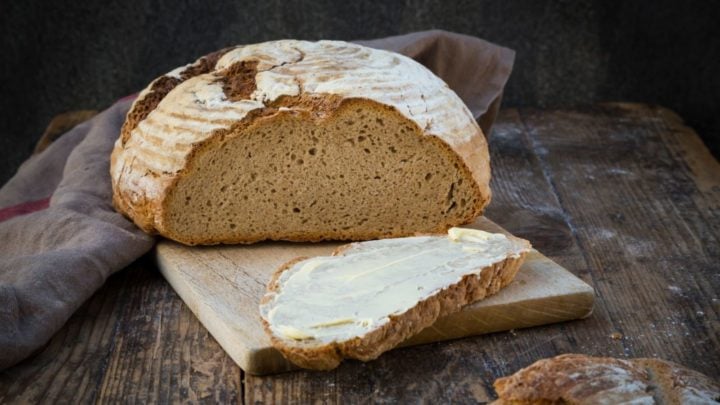 What to do with an old loaf of bread...? Source: Getty Images

What to do with stale bread? I was cleaning out the fridge the other day and came across a large loaf of bread. The bread had been there for too long and was anything but fresh, not mouldy though.

It got me thinking as to what to do with it. I hate waste so chucking it out wasn’t an option.

Friends were coming over for dinner so I made the decision to use the bread and make a scrumptious dessert. Yes, dessert it would be, in the form of an old fashioned bread and butter pudding.

Bread and butter puddings have been a staple throughout my lifetime. Grandma made the best I have ever tasted. She used to get the flavour and consistency spot on.

The puddings always had sultanas in them. It just wasn’t a proper pudding if the sultanas were missing. This was according to Grandma.

I would be kidding myself if I thought I could do a better job. I mean to say, grandmas rule as far as cooking goes; their talents cannot be surpassed.

My bread and butter pudding has no sultanas. It is cooked in a pie maker.

You know, the good old pie maker that has been around for years. It has come back with a vengeance. So much so, that I found myself dusting off my circa 1990 pie maker and cooking stuff other than pies.

Each pie hole took about half a cup of mixture. Perfect for a table of four.

I started by buttering the bread and then cutting circles of bread, just the right size to fit in the recess of the pie maker. Four circles in each hole. Next I made a custard from milk, egg and sugar, with a splash of vanilla for good luck.

I poured the mix over the bread, let it sit for about half an hour. It has to soak into the bread.

I then put a few raspberries on top, closed the lid, turned it on and coòked for 10 minutes.

When I removed them from the pie maker I sprinkled a bit of icing sugar over the top. Quite optional for all the sugar haters out there. Serve with more raspberries and a dollop of cream.

Do you have any recipes using leftover bread?