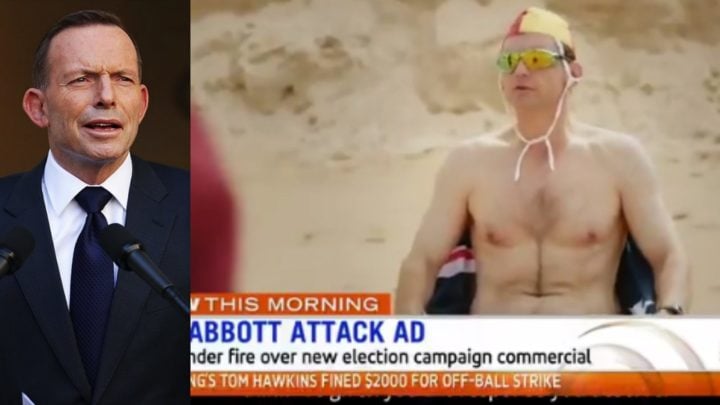 Tony Abbott was portrayed in the ad by an actor. Source: Getty (left) and Twitter/7 News (right).

Alan Jones has slammed a controversial advert that parodies Tony Abbott as a lifesaver who refuses to rescue a drowning swimmer, branding it “tasteless” and “ugly”.

The proposed election ad by GetUp! has since been withdrawn, with the activist group apologising for any offence caused.

It was used as part of the group’s campaign against Tony Abbott in his northern beaches seat of Warringah, and featured an actor portraying the former PM, who is seen sitting in a beach chair and refusing to rescue someone as they struggle in the water.

GetUp! pulled the ad – which criticises the Coalition’s climate change policies – before it could air in cinemas after the Royal Life Saving Society insisted it was in “very poor taste” following a series of tragic drownings over the Easter period – including father and son lifesavers Andrew Powell, 32, and his hero father Ross, 71, who died while trying to save a tourist from rough waters in Port Campbell.

He added: “It’s incredibly insensitive to the 250 families who lost loved ones to drownings in the last 12 months.”

Jones joined the stream of backlash, hitting out at it on his 2GB radio show, saying: “They’re a tasteless lot, aren’t they, this crowd? These people think they’re helping someone. They should think again. They’re certainly not helping Labor, people don’t like this ugly stuff.

“Just imagine if that had been done to someone on the left.”

GetUp! have pulled the ad and released a lengthy statement on Twitter, apologising for any hurt caused.

“We have heard the criticism of the Royal Lifesavers and are pulling our satirical ad about Tony Abbott’s inaction on climate change, which was slated to begin airing in cinemas next week,” the group said, adding: “We have the greatest respect for Australia’s lifesavers and apologise for the insensitivity of the timing and subject matter of our planned ad.”

Abbott is a volunteer lifesaver and is currently in a battle to retain his Sydney seat of Warringah against the independent candidate Zali Steggall at next month’s election.

The advert shows the actor sat eating an onion on a beach chair, before a woman rushes over pleading for help for a drowning swimmer. The character then replies: “I think you’ll find the science isn’t settled on that.”

She replies: “What? Do something!” To which the Abbott character says: “Why should we act first? I think I’ve given you the response you deserve.”

The ad then flashes up a caption which reads: “The climate’s changed. Why won’t the Coalition?”

Abbott himself later slammed the ad, writing on Twitter: “Forget me, but @GetUp should apologise to Australia’s 150,000 plus surf lifesavers for mocking what they do.”

What do you think? Did they make the right decision to pull the ad?