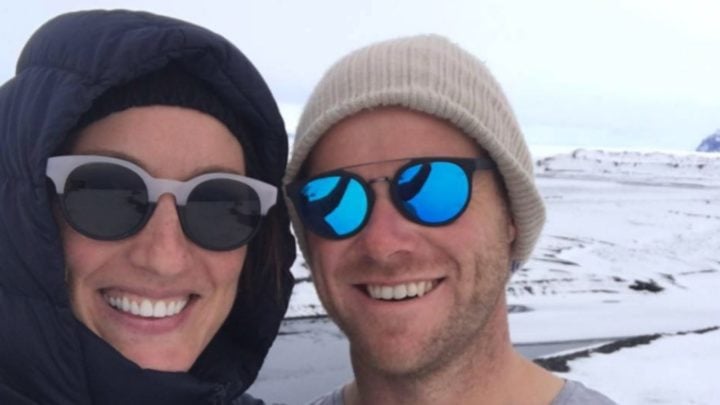 A grieving mum-to-be has shared a heartbreaking tribute after her partner and his father died while trying to save a tourist from rough waters in Port Campbell this Easter weekend.

Amber Griffiths shared the moving message with her followers on Facebook after her partner and father of her unborn baby girl, Andrew Powell, 32, tragically lost his life alongside his hero lifesaver father Ross, 71.

“For those who don’t know, I’m sorry you have to find out in social media,” the grieving widow wrote on Facebook.

“Today we lost two of the most beautiful people to ever exist – always putting others first. The love of my life, light of my life, father of my baby girl. My heart is broken. I miss you Andrew Powell.”

According to Victoria Police, the pair took a boat out alongside their friend and fellow rescuer – named in multiple news reports as Port Campbell’s CFA brigade captain Phil Younis – before it flipped over in the surf, throwing all three of them overboard.

They were attempting to rescue a 30-year-old tourist who had gotten into difficulty in the rough seas at Sherbrook River, near the 12 Apostles on Victoria’s south-west coast. While the tourist and Younis were winched to safety, the Powells both tragically lost their lives in the water.

“The male rescuer was airlifted to hospital with serious injuries and the swimmer was taken to hospital by road ambulance in a stable condition,” Victoria Police said in a statement.

“The bodies of the remaining two male rescuers, aged 32 and 71 from Port Campbell, were located in the water. They were both declared deceased at the scene.”

According to The Age, Younis was expected to undergo surgery on Monday with his brother by his side.

The news outlet reports that the Powell family shared a statement on Monday describing Ross as a hero lifesaver with years of experience, including getting a bravery award after a rescue on Easter Sunday in 1980 at the nearby Loch Ard Gorge.

“Ross (Po) dedicated much of his life to contributing to his community. But above all, he was a cherished husband to Val, a dedicated father to Brett, Natalie, Dale, Kerryn and Andy, and dearly loved brother to Marea. He was very much loved and respected by many,” the statement read.

He had reportedly only moved into his new home in Port Campbell the week before with his wife Val, while his son Andrew was managing the family property at Cooriemungle.

“Andrew (Andy) was always by his dad’s side and a beloved partner to Amber, son and brother,” the statement went on. “We will miss our beautiful, big-hearted Andy and were so proud of the person he was – gentle, compassionate, loving and selfless – like his father. We are heartbroken. Our thoughts and love are with Phillip (Fuzz) Younis and his family whilst he recovers.”

According to The Age, members of the Port Campbell SLSC gathered on Monday for a minute’s silence in their honour.

Have you been following this story? Do you have a message for the family?