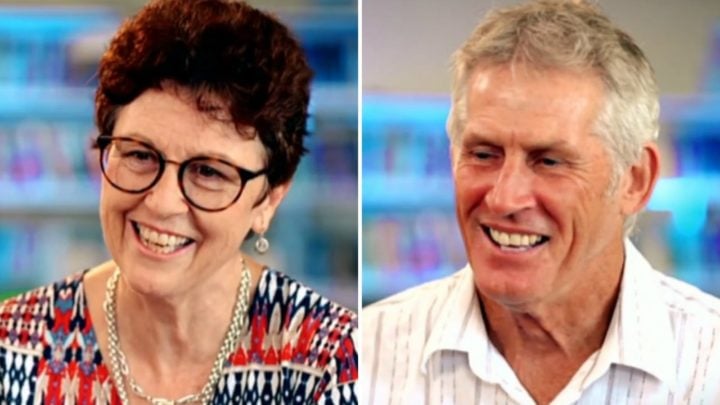 In a segment on The Project, grandparents answered burning questions their grandchildren had. Source: Facebook.com/TheProjectTV

Google has long been the go-to place for people to find answers to their burning questions, but governments across Australia are backing a new initiative encouraging school students to ditch the famous search engine in favour of asking grandparents questions.

The Ask Gran Not Google program – which has already been rolled out across some schools across the country – benefits both students and older members of society by bringing them together. After all, most Boomers and people in the SAS community grew up asking their own grandparents questions because technology such as Google and the internet simply didn’t exist.

“‘Ask Gran Not Google’” is an intergenerational campaign, aimed to coincide with the annual Grandparents days and Seniors Weeks in key States in Australia,” a message on the official Facebook page reads. It is a co-ordinated program, working with selected Schools, where children will be given the opportunity to meet with Seniors and to tap into their wealth of knowledge by ASKING GRAN NOT GOOGLE.”

On Friday’s episode of The Project, students and their grandparents showcased exactly how the program works, with hilarious outcomes.

Primary School student Charlotte Fox, 11, asked her grandma what it was like living with caveman. Hilarious, Chrissy Wilson Fox replied: “You’d have to ask grandpa that one.”

She was also curious about technology her grandmother grew up with – whose first major technological item was an electric typewriter.

Coco Belyea, seven, wanted to know why her poppy Brian had grey hair.

“Your nana made my hair go grey,” he joked.

For nine-year-old Billy Kilburn, he was curious to know what TV was like when his grandmother grew up.

“My goodness, we didn’t have TV when I was your age, “his gran Judith replied.

He also wanted to know what it was like for his grandmother to ride a horse and carriage to school.

“You know I’m not that old,” she said with a smile. “You’ll have to ask your great-great grandfather about that.”

Meanwhile 12-year-old Billy Rutledge was surprised when his grandmother told him she got her first ever mobile phone until 2003.

Perhaps most hilarious was a question by Monte Motio, seven, who wanted to know what hitchhiking was.

“Hitchhiking is when you’re walking along the road and you try to stop a car or a truck to stop and pick you up to take you away,” his grandfather Gerrit Neef said to little Monte’s utter confusion.

Other questions children had included trends grandparents grew up with, what the cars were like back in the day and the best way to make cookies.

Read more: Kids spending time with grandparents could be better for society

Viewers of the segment had mixed reactions as to whether the program was a good idea.

Another comment read: “Engaging with our elders is one thing, but refusing the world’s greatest library of knowledge for advice from someone who completed high-school (if they were lucky) in the 60’s is a one-way ticket to the dark ages on a freight train of ignorance.”

A third added: “Makes sense…after all most of us were here before google!”

What are your thoughts on this? Do your grandchildren ask you questions?