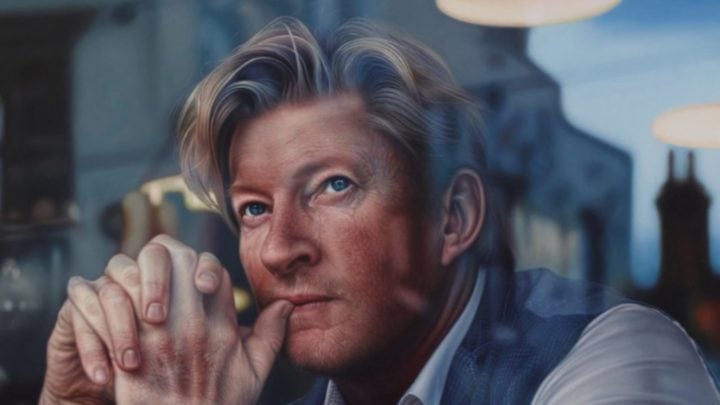 The intricate portrait by first-time finalist Tessa MacKay shows the Lord of the Rings and 300 actor looking out thoughtfully through a cafe window with his hand up to his mouth. Named ‘Through the looking glass’, it shows the reflection of his busy background around him and is amazingly life-like.

The $1500 Packing Room Prize, announced by the gallery’s head packer Brett Cuthbertson, is an annual prelude to the old and prestigious $100,000 Archibald Prize – to be announced next Friday.

According to The Australian, Cuthbertson told an audience at the Art Gallery of New South Wales that he loved the portrait from the moment he saw it.

Meanwhile, artist MacKay also spoke to the news outlet and explained that Wenham sat for two days at a cafe in Newtown in Sydney’s inner west for the artwork – but she worked on completing it for a year.

“They become become a part of your life these works,” she added. “And to stop, you just go into this great depression, so it’s so wonderful to see it being exhibited because the journey continues.

“It’s caused so many tears, a lot of hugs, but so much growth and I feel a lot more comfortable in my own ability as an artist because it’s pushed me to become so much more than I thought I could be.”

And it’s not the first time Wenham has posed for a prize-winning portrait, as he was also the subject of 2000’s Archibald Prize winner Adam Cullen.

It comes after a gripping portrait of popular Aussie singer Jimmy Barnes, inspired by his past mental health battles, won the Packing Room Prize last year.

The colourful and detailed artwork, by first-time finalist Jamie Preisz, received praise for its raw appeal and honest portrayal of the once-troubled singer.

Meanwhile that came after a portrait of Lisa Wilkinson took home the $1,500 top gong in 2017.

The portrait was created by Peter Smeeth. Speaking at the time, he said there were multiple reasons Wilkinson made a great subject for his latest artwork.

“Appearing on television every weekday morning makes Lisa one of the most recognisable people in Australia and an obvious choice for the Archibald Prize,” Smeeth said. “Being such a high achiever and a great role model for women adds to her appeal as a subject. Television brings its subjects into your living room – and here, I have done that literally as if Lisa is in the viewer’s space.

“Three important things in Lisa’s life are her family, television presenting and print journalism so I have placed her between a television and a magazine, while her family members are reflected on the screen. I wanted to convey the idea that when Lisa is not on television, her family is her focus.”