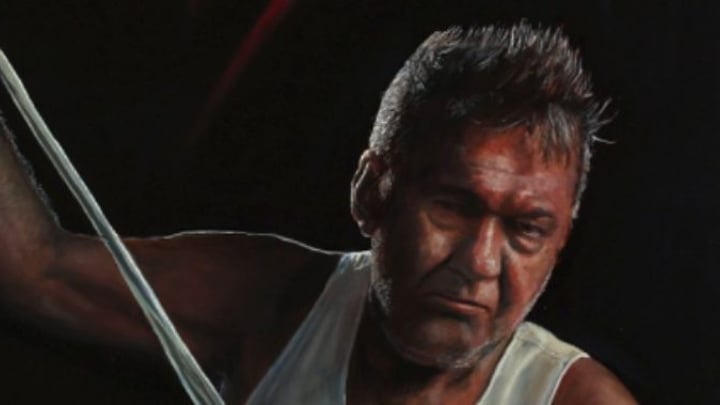 A gripping portrait of popular Aussie singer Jimmy Barnes, inspired by his past mental health battles, has won the Archibald Packing Room Prize.

The colourful and detailed artwork, by first-time finalist Jamie Preisz, was announced as the winner of the annual competition on Thursday, and received praise for its raw appeal and honest portrayal of the once-troubled singer.

The portrait shows Barnes, 62, in a white singlet top, wrapping bandages around his knuckles as if he’s ready to take to the ring. With a small tattoo on one arm, he looks down in the dumps in the startlingly realistic scene.

The Packing Room Prize is judged by staff who receive the portraits and hang them in the gallery.

Archibald curator Anne Ryan told ABC’s 7.30 this week that it’s “more akin to what our everyday visitors might appreciate and enjoy.”

A big congratulations to Jamie Preisz on winning the Packing Room Prize for his portrait of me. He’s a really talented young artist and I’m glad to have been a part of his journey. #archibaldprize #packingroomprize pic.twitter.com/ai5XBgdn1N

“Jimmy’s openness and honesty about his own struggles [with mental health issues] was the inspiration for this piece and hopefully an inspiration to the Australian public.” – Jamie Preisz on his Packing Room Prize-winning portrait of @JimmyBarnes #archibaldprize pic.twitter.com/9WyYvro26S

Barnes has always been open about his battles with mental health. The star shared his troubles with poverty, addiction and domestic violence in his first book, Working Class Boy – before admitting in his second book, Working Class Man, that he once attempted suicide.

Smeeth said there were multiple reasons Wilkinson made a great subject for his latest artwork.

“Appearing on television every weekday morning makes Lisa one of the most recognisable people in Australia and an obvious choice for the Archibald Prize,” Smeeth said. “Being such a high achiever and a great role model for women adds to her appeal as a subject. Television brings its subjects into your living room – and here, I have done that literally as if Lisa is in the viewer’s space.

“Three important things in Lisa’s life are her family, television presenting and print journalism so I have placed her between a television and a magazine, while her family members are reflected on the screen. I wanted to convey the idea that when Lisa is not on television, her family is her focus.”

Do you think it was a worthy winner?