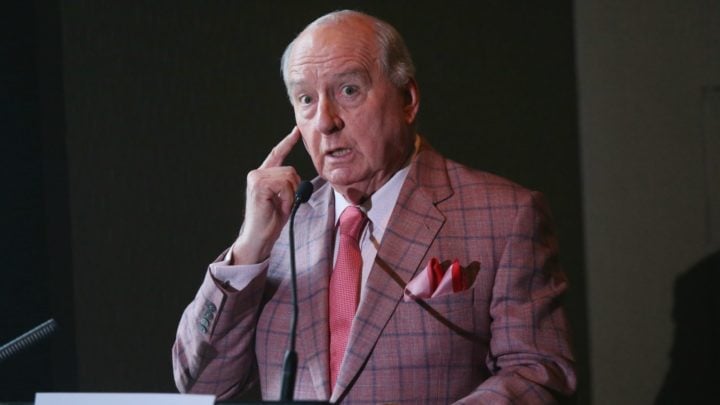 Alan Jones will remain a host on 2GB for at least two more years. Source: Getty

There’s been much speculation that his future as a presenter on 2GB radio was in doubt but it’s now been confirmed that Alan Jones will remain on air.

In a statement, Macquarie Media Limited said the 76-year-old had signed a deal for two more years, meaning he will continue to host his popular breakfast program on Sydney’s 2GB and Brisbane’s 4BC. The announcement follows months of formal negotiations and the deal will come into force on July 1.

In a statement posted on the 2GB website, Macquarie Media Limited Chairman Russell Tate said he was “very pleased” that Jones would continue to be part of the team for at least two more years.

“Over his already extraordinary radio career, Alan has dominated Sydney radio with 218 ratings survey wins, including 15 consecutive years at Number 1 on 2GB – an unprecedented achievement,” Tate said. “And with Alan’s current ratings share of the Sydney radio audience amongst the highest it has ever been, his dominance shows no sign of slowing down.

“All of us at Macquarie are delighted that we will continue along for the ride with one of the Australian media’s most outstanding performers.”

Jones has been a presenter on 2GB since 2002 and has earned more than 200 ratings victories. He’s also been the number one show in Sydney for 15 years in a row.

Despite his success, there had been reports that the radio shock jock’s numbers at the station could be up following a string of controversies. In September, Jones was found guilty of defaming the Wagner family, after implying that they were responsible for the deaths of 12 people at their family-owned quarry in Grantham in 2011.

The Queensland Supreme Court awarded the family from Toowoomba $3.4 million in damages, plus interest.

The star is also no stranger to controversy and made headlines in 2018 when he launched a scathing, unprovoked attack on a female sports reporter in a column for The Australian. He described rugby.com.au writer Beth Newman as a “paid mouthpiece” for Australian Rugby, leading to backlash online.

He was also branded as “racist” after using the n-word live on air last year, but later apologised for his comments.

Listeners first got a taste of Jones in 1985 when he joined Sydney’s 2UE morning show, while he’s also been a teacher, writer and was previously the coach of the Australian rugby team.

Do you listen to Alan Jones in the morning? Are you glad his contract has been renewed for two more years?