‘Australia’s Tidbinbilla Nature Reserve is among my Top 10 walks’

Editor’s Note: At the time of publication Canberra’s Tidbinbilla Nature Reserve, including the Visitor Centre, was closed due to safety issues resulting from the current weather conditions. Before travelling, Travel at 60 recommends consulting with ACT Parks and Conservation.

From afar the clump of rocks stood out. As a photographer you just knew there would be opportunities. As an anthropologist you would realise it would have significance. As a bushwalker you knew it had to be climbed. Whatever the reason, I made up my mind to check out the possibilities within seconds of seeing it.

A call in to Tidbinbilla Nature Reserve — a short drive from Canberra, Australia — was enlightening. I had no idea there was such a thing for starters. After I’d been given a briefing and a detailed map, excitement reigned. Not only was there a rocky mount called Gibraltar Peak, but a multitude of other possibilities. That money had been spent on the project there could be no doubt. It is, after all, on federal territory.

Doing a weather check that night revealed the day to go was tomorrow. Seven to 17 degrees it said, no clouds it said, no wind of significance it said. I said it was time to go.

The park opened at 7:30am and I managed to arrive at 7:45am. There was no one in the office to pay the entry fee to — $13.50 per vehicle or $8 for old farts with the relevant card. A sign on the boom gate in a raised state said that it wasn’t working, so I drove on. The parking area I sought was named Dalsetta and there it was, just a few kilometres in, replete with thunder box toilets au naturel.

I could barely contain my excitement but took time to check the map and take something to sustain me. After I polished off three pieces of chocolate. Couldn’t run the risk of them melting after all. I shoved the banana bread slice in my pocket and clipped the drink bottle to a belt loop and moved across the road, for that was where the trail started.

When you’re a bushwalker, you appreciate when a trail is well marked and this one left me full of appreciation. Clear arrows in the right places can be such a joy but, added to that were histories writ large upon signs. A secondary native shrub called Burgan has expanded its territory, causing much debate about how far they’ll let it go before it needs to be stopped. However, I learned that once-prolific kangaroo grass was flourishing here now that stock had been removed from the cleared land. It has become almost extinct in so many other places in Australia and it explained why there were so many kangaroos beside the track. More often than not you could get with 3-4 metres of them. This was already an excellent walk.

The ascent was almost unnoticeable for the first kilometre or so as you passed by dried reeds that stood out in the back-light. The climb proper began as you reached the forest. Now it was a true hikers’ trail. Switchback after switchback until you reach a saddle between two mountains. Here there was a round table with bench seats and a sign proclaiming that this was Ngunnawal country. The mount had indeed been significant for them, a place to guide their paths.

There was another sign about orchids. “This section of the track is particularly rich in orchids, especially in spring” and “Tidbinbilla has more orchid species than all of Britain” got me somewhat excited. Now, other than the snakes I’d been keeping an eye out for, I could look for orchids. The way I figured it was that seeing an orchid would give me a special feeling of goodness while sighting a snake is clearly not a pleasant experience and death can result. Bit of no-brainer really. For the next 45 minutes though, I saw neither, though you must remember I was really only looking for orchids.

From the saddle, the climb became steep in places and they even had steps here and there. Glimpses of distant views could be garnered through gaps in the branches, hastening my footsteps somewhat. Somehow you most often seemed to be heading away from your destination but then, a few twists and turns later and you could see the summit above.

Scraggy gums left mottled shadows as you moved into the granite proper, large lumps of rocks that you had to divert around, like protective walls around a castle, and you had to find a way through. The rocks became larger and then, just ahead, a properly constructed lookout of hatched steel flooring.

Somehow, while the view was impressive, you just knew it was going to be better further on. The trail swung away and into the large outcrop until, suddenly, you were beside a broad made road, the fire trail that came via a different, and shorter route. Right beside it was a sign, ‘Welcome to Gibraltar Peak’. Yet you weren’t actually up the top just yet. That was about another 300 metres further on and, when I zig-zagged through the giant boulders, excitement came to the fore yet again.

There was a giant crack in one monolith that you could squeeze through and that led you to what could be fairly labelled the rear view. Impressive though it was, you couldn’t help but feel the main event was on the other side, and so it transpired. Finally clearing all obstacles I clambered on top of one giant slab of rock. ‘Wow’ was the word that immediately came to mind and it didn’t disappear for some time. My phone camera was in overdrive, as well as video, panorama and photo mode. In perfect weather I’d climbed to this perfect place and had it all to myself. 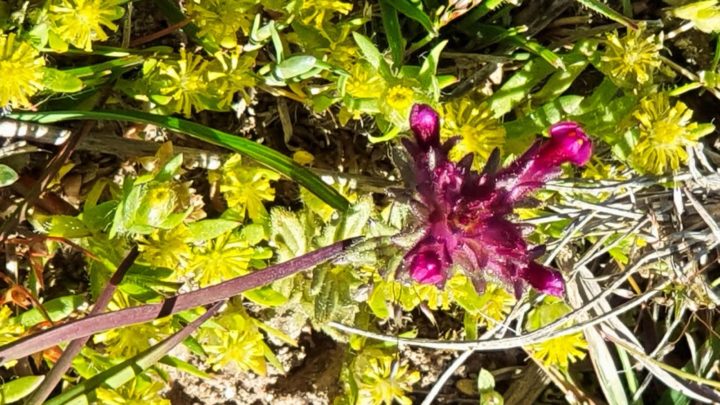 I sat down to consume my food and view all at the same time. The banana bread cracked and a piece dropped off onto the grit. I didn’t care, I was so hungry I picked it up and ate it anyway. I had to admit the gritty bits were a bit chewy though. The drink washed it down and I’m sure the little stones aided digestion.

I’d been there for about 10 minutes when I was joined by a cyclist. He’d come up an entirely different route from the other side where he was camping down below. One topic led to another and we got to gammy knees. He was taking painkillers for his while I explained my high pain threshold. We both agreed that the place needed to be called something other than Gibraltar and felt an aboriginal name would be so much more appropriate. He then lamented how there was no internet coverage up here as he tried to send a message while seated on the rock; to which I replied that I thought getting here was an opportunity to get away from all that. Then I sent a text to someone …

After about 30 minutes we parted; this time I chose the fire trail, knowing it would be quicker but steeper. It was and my knees reminded me constantly for the next 1.5 hours. The views weren’t as good and the trail wasn’t as scenic but I was happy I’d done both. By the time I staggered back to the car, 3.5 hours had elapsed, but I felt elated. One of the top 10 walks I’ve done in Australia. The trip back to base would be a good one.

Do you enjoy bushwalking? Where have your walks taken you?