A cancer diagnosis is not a death sentence 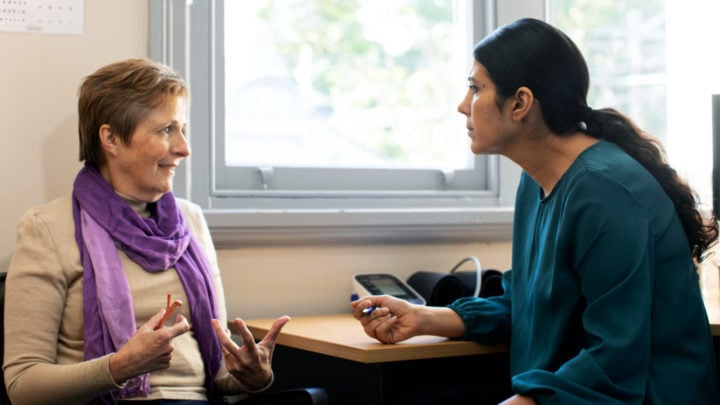 The current five-year survival rate for cancer in New South Wales is on par with the best health systems in the world. (Picture posed by models)

A cancer diagnosis is not a death sentence. Those are the words of Professor David Currow, Chief Cancer Officer and CEO of the Cancer Institute NSW.

In fact, more people are surviving a cancer diagnosis now in New South Wales than ever before. Data from the Cancer Institute NSW show that while cancer incidence rates have risen for men and women in NSW since 1972, rates of cancer death have fallen across the same period. Between 2005 and 2009, 67.2 per cent of people diagnosed with cancer in NSW survived at least five years, whereas between 1995-1999 the survival rate was 58.9 per cent.

While one in two people in NSW will be diagnosed with cancer by the age of 85, the good news is that the state is a leader in cancer care and treatment.

The truth of the matter is that more people are being diagnosed with cancer simply because our life expectancy has increased dramatically over the past few decades. As Professor Currow puts it: “The single greatest risk factor for developing cancer is having birthdays, over and above everything else.” Yet despite this, the current five-year survival rate for cancer in NSW is on par with the best health systems in the world.

“New South Wales, or indeed Australia, is one of the best places in the world to be diagnosed with cancer,” Professor Currow says. “Australia delivers world-class outcomes.”

These promising outcomes are being driven by advances in the early detection of cancer, as well as improved cancer diagnosis and treatments. Together, these factors are allowing many more people to survive cancer and live longer with the disease.

What can I do?

While this is good news, it’s also important for people to take steps to optimise outcomes if they have, or if they suspect they have cancer. The first of these is talking to a doctor about any signs or symptoms you notice.

Professor Currow says that some of the main warning signs of cancer include weight loss, change in appetite, a new or changed cough, change in bowel habits, unexplained bleeding, or “anything that’s out of the normal.”

If you’ve noticed any of these warning signs, Professor Currow suggests that the first step is to seek advice straight away.

“Go and see your general practitioner,” Professor Currow says. “Simply say ‘I am worried about the following symptoms and I am worried that I have cancer’. The sooner we can find cancer the more likely we are to be able to treat it successfully, and the more likely it is that that person won’t be troubled by that cancer again in their lifetime.”

People can also take steps to reduce their risk of getting cancer – that’s why he says it’s important to maintain a healthy lifestyle. Ensure you’re eating a balanced diet, getting plenty of physical activity and enough sleep.

“Live a healthy lifestyle, including not smoking, not drinking, protecting your skin, eating well and getting regular exercise,” Professor Currow says. “While cancer can impact anyone, you can reduce your risk of getting it.”

What to do if you have a cancer diagnosis

If you’re diagnosed with cancer, make sure you engage with your health professionals and get the right care.

“The first thing is to get the right team around you,” Professor Currow says. “I encourage people to have their care overseen by a multi-disciplinary cancer care team. [That includes] an oncologist, radiation oncologist, surgeon, and a specialist of that particular part of the body.”

In addition to a having qualified team of health professionals around you, Professor Currow notes that it’s also important to ensure you have the right support network around you – including friends and loved ones – so that you don’t have to navigate the journey alone.

Find out what you can do to reduce your risk of cancer, or how you can find it early and get the best treatment and care. The Cancer Institute NSW is dedicated to reducing the impact of cancer and improving outcomes for people across the state.

See what we do

Were you aware of these improvements?