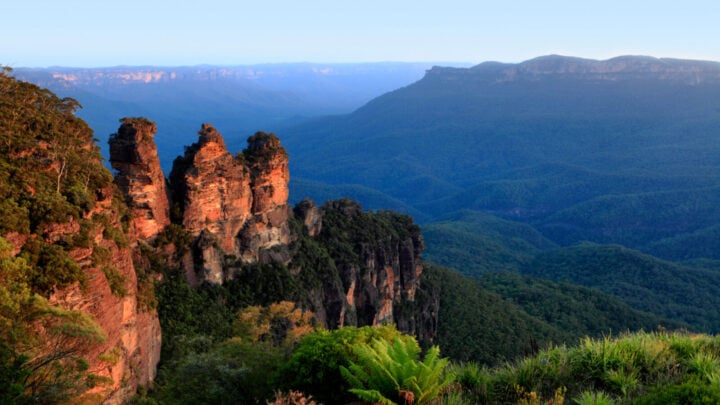 Ian takes us on a walk to some of the Blue Mountains most spectacular spots. Source: Getty

For some reason I couldn’t find it again, yet I knew it was nearby, the sign said so; except this was where the tracks went in three different directions and, as I later worked out, they just wanted you to take the long route to avoid confusion. Except, 20 minutes later, I was confused. That I’d descended too far was apparent. I didn’t need to take any more steps to work that out. Where exactly was Witches Leap? (Leap – old Scottish word for waterfall, used in a few places here in the Blue Mountains).

Still, the track was listed as one rarely used and I was sure I’d seen stuff I’d never walked past before. Then again, when you’re leaping fences (not in a single bound these days), dangling over off-piste vertiginous drops and scrunching around in virgin forest, you’re bound to come up with things like angles of Katoomba Falls I’d not taken previously. The Rough Tree, Soft Tree, King and Fishbone Water Ferns were all flourishing with the recent rains and gathered in great clusters beneath the towering ribbon gums and other assorted natives.

I clambered back up the hundreds of stairs to my starting point, only diverting for an urgent toilet break. Fog drifted in and around the canopy but it wasn’t thick yet and the new bout of rain hadn’t arrived.

Back at the signs and I ignored the one I’d chosen before and, sure enough, only a few hundred metres down I reached my target. It was disappointing because the water levels had dropped and, though the flow was good, you couldn’t call it spectacular.

It was then I made the decision. Previously I’d pondered following the course of the creek but hadn’t bothered. Today, it started to gnaw at me. After I took some pictures for a young couple in front of the cascade, I’d virtually made up my mind and soon I was straddling the fence. Such a change from the barbed wire I’m used to tackling. Pipe fencing is so user friendly.

Though initially I sought to record just the first flourish meandering through the rocks; one temptation led to another and, ever slowly, I made my way down the course. As so often happens, it’s one lure after another and, like the hungry fish, you just have to keep following the bait.

It’s so refreshing for the mind though, having to find ways where there are none, noting every footfall, testing each fallen branch because some are wont to crumble and feeling the natural softness of a bed of fallen leaves.

The stream twisted every which way beneath towering cliffs whose cast off remnants formed the natural barrier for the water flow. Their moss laden presence a reminder that nature isn’t permanent and boulders can fall any time with little warning. Dead tree branches chose to clutter up some areas and, at one stage the waters cut beneath the cliff which leads one to wonder how long before the next crumbling.

At times easy, other times requiring bum sliding, I’d determined that, sooner or later, I had to reach a made path again as I slipped out of some strangling vines that interrupted my progress. Occasionally busy clusters of fungi were slowly disposing of decaying trees and lichen grabbed onto whatever was available, usually the coachwood with its wonderful abstract bark.

Saplings were urgent in their efforts to climb higher and grab some more of the light, waiting for that opportunity when one of the giants is cast aside in a storm and, here and there, such events had occurred. They must make an almighty crash when they fall.

Then it was there, the trail, probably half way along the famed Furber Steps that takes you ultimately to the valley below, all 996 of them. (Named after Thomas F. Furber (1855-1924) a surveyor and lecturer who had an active interest in the reservation of the Blue Mountains and the Sydney Foreshore.)

My only goal now however was up, taking occasional stops for breath and lookouts, of which there are lots in the area, sometimes in surprising places. At one stage I passed over another fence and found myself on a narrow ledge beside a small cave, eventually becoming so terrified I edged back to safety.

When the top was reached I gratefully sat on an appropriately placed bench seat and texted some photos off. Though the motorhome was in sight nearby I simply couldn’t be bothered going the extra 60 metres so I sat there for around half an hour soaking up the atmosphere and greeting the dog walkers as they passed by. Being carefree in the Blue Mountains has a lot going for it.

Have you been to the Blue Mountains?