‘Treading the footsteps to enlightenment: The mystical temple of Borobudur’ 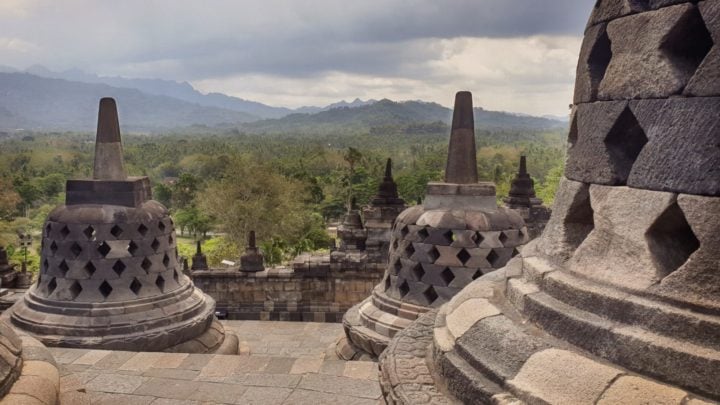 The spectacular view from the summit to the nearby volcan. Source: Geoff East

Whilst enjoying a recent cruise, I took advantage of the opportunity to visit the mystical Temple of Borobudur in Java, Indonesia. This was one of several excursions arranged by the cruise ship’s tour staff once we had docked in Semarang on the north coast of Java.

We boarded one of three buses at the Port of Semarang and were surprised to discover that we had a police escort! “How odd,” we thought. “It’s only 90 kilometres to Borobudur. Surely that’s only an hour away.” Not so.

Even with our police escort and although we used toll roads around Semarang, it still took 2.5 hours to get to the temple owing to many poor, winding roads and heaps of traffic (mostly motor bikes). Whilst there are toll road freeways on Java, these are privately funded and expensive, so the locals generally cannot afford to travel on them. Consequently, the traffic is bedlam as you get out of the cities.

Nearly 60 per cent of all Indonesians live on the island of Java. In 2015, the Javanese population was 145 million or nearly six times Australia’s population in an area roughly twice the size of Tasmania! The logistics of feeding, housing and transporting this population are mind-boggling, but in a chaotic sort of way, it somehow kind of works.

While there are reportedly over 100,000 millionaires in Indonesia, we saw very few signs of prosperity on our journey. That said, all the locals seemed well fed and clothed, the water and electricity supplies work and a wave from us would always get a smile back in return. Terraced rice fields were seen everywhere since rice is the staple diet. These fields are still hand tendered and there was little visible mechanical farming. A late wet season, as we experienced, can really impact the food security of this country.

Our Indonesian tour guide, Trudi, treated us to a running commentary along the way on all things Indonesian. He explained the origins of the Bahasa standardised national language in a country that has more than 700 local dialects. He also described three of the main virtues required for a Buddhist to become a good person and attain enlightenment, being Dāna (generosity), Sīla (proper conduct) and Khanti (patience). I reminded myself to explain these virtues to my grandchildren. It seems to me we could all do with a stronger moral code these days. Perhaps I should become a Buddhist?

From the very first sighting, Borobudur is impressive. Even the name exudes mysticism like something straight out of a Tolkien novel. This monumental structure is one of the finest and most intact temples in south-east Asia and some say rivals Angkor Wat, but as I have not seen the latter, I can’t confirm that claim. Anyway, it is indeed an imposing sight and it’s large. It occupies a footprint of nearly 14,000 square-metres (larger than two soccer fields), stands 35 metres high and has a volume of 55,000 cubic-metres.

Borobudur is an iconic UNESCO World Heritage-listed Buddhist temple located approximately 40km north of Yogyakarta, and 90km from the main port of Semarang. It is the world’s largest Buddhist temple and relic constructed of some 2 million perfectly cut and laid intermediate basalt stones. It was believed to be constructed over a 75-year period in the 8th and 9th centuries and was built as a place for glorifying Buddha and a pilgrimage spot to guide mankind from worldly desires into enlightenment and wisdom according to Buddha.

Borobudur consists of nine stacked platforms, the lower six are square and the upper three are circular, topped by a central dome. It is decorated with 2,672 relief panels and 504 Buddha statues. The central dome is surrounded by 72 Buddha statues, each seated inside a perforated stupe. When viewed from above, Borobudur takes the form of a giant tantric Buddhist mandala, simultaneously representing the Buddhist cosmology and the nature of mind. The whole structure resembles the idea of a terraced mountain blending in with the Buddhist concept of ascending steps to attain the ultimate goal of Nirvana.

The lower six terraces consist of reliefs representing daily life including passion and desire, where those who are good get rewarded with reincarnation as a higher form of life. The evil ones, on the other hand, are reincarnated as a lower form of life as a punishment. Hmmm … Something I pondered as I ascended one of the four staircases from the base to the apex consisting of more than 100 stairs each.

The view from the top is spectacular, taking in the majestic nearby volcano and is well worth the climb. You do need moderate fitness and there are few handrails, so you need a bit of agility as well, particularly as the lower steps are higher than normal reflecting the difficult ascent to enlightenment and Nirvana.

Indonesia straddles the equator so it’s always hot and often humid, which is magnified by standing atop a very large basalt temple. Make sure you are well covered and have plenty of water. Be aware that some local ‘guides’ may appear to be a bit too helpful and offer to shade you with an umbrella. They are simply seeking payment for their services and are not genuine guides. Don’t be afraid to say ‘No’ — firmly but politely.

Nobody knows why Borobudur was abandoned in the 14th century. Possibly it coincided with the decline in Hinduism and the conversion of the Javanese to Islam. Since then, the relentless jungle and volcanic ash slowly covered this monument until it was ‘discovered’ by the British in 1814 under Sir Thomas Stanford Raffles. It wasn’t until 1835 that the entire area of the temple was cleared.

After centuries of neglect, the stonework had deteriorated and decayed and if left unattended would have forever lost a lot of detail. In the 1970s, with the help of UNESCO, professionals from around the world collaborated to save the ancient temple. The plan was to dismantle and rebuild the five of the six square terraces from the base up. In 1975, the restoration began and took 10 years to complete. More than 1 million stones were moved during the course of restoration, set aside, catalogued, cleaned and treated for preservation. Some stonework could not be saved so new replicas were constructed. New stonework is now identified by a steel pin in each stone.

I could have easily spent a whole afternoon studying the many reliefs, but be warned this takes in a walk of 4.5km. Unfortunately, we only were scheduled 1.5 hours at the temple and then we were ushered to lunch at a large gazebo at what appears to be a resort hotel at the base of the temple mount. Apparently when UNESCO agreed to fund the restoration of Borobudur the hotel was closed as a condition of funding in order to control the number of visitors to the site.

Did I mention that there are often crowds? Getting that perfect photo without an army of your new 100 best friends can be challenging.

Lunch was a very impressive buffet consisting of fried seafood, stir fry beef, satay sticks, vegetables and rice. All was plentiful, spicy and tasty. To accompany lunch, we were each allocated two small beers, which was a welcome treat after scaling the temple in the heat and a nice surprise considering we were within a Muslim community where alcohol is generally considered ‘haram’ (prohibited or sinful).

During lunch, we were treated to a local dance ensemble accompanied by traditional music which complemented the dances beautifully, although to my ignorant Western ears it was challenging to discern the difference between songs. The dancers were graceful adolescents. All looked impressive in their colourful custom dress and makeup.

All too soon it was time for us to return to Semarang so that we did not miss the 8pm departure of our cruise ship. Even though we had a police escort we became stuck in a traffic jam for a while as the local roads are only single lane in each direction. Nevertheless, we arrived at the port at 7:30pm in plenty of time.

Our guide Trudi and our bus driver both come from Yogyakarta and after dropping us, had to return the bus to the Semarang depot and then ride 110km home on their motorcycles the way we had just come. They would not have got home until midnight making it an 18-hour working day for them — so, next time you think we in Australia are hard done by, spare a thought for our Indonesian neighbours.

If you do go to Java, then make sure to take in the majesty of mystical Borobudur. It can be a truly life-changing experience.

Have you been to Borobudur? Is a trip to Indonesia on your travel bucket list?