‘Take a peek inside one of Sydney’s best-kept secrets’ 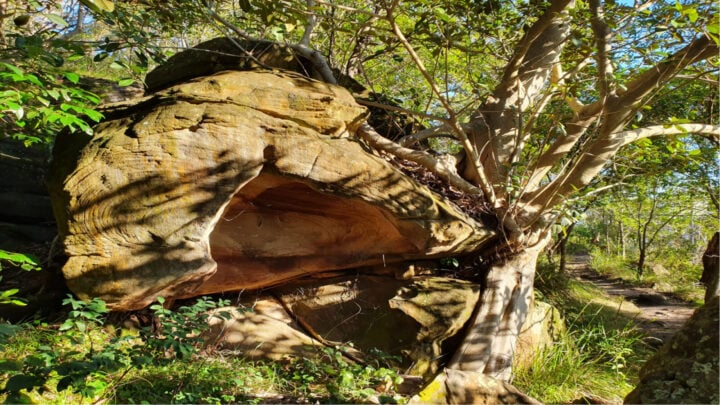 Research indicated that Sydney’s Gore Cove Track was good and Smoothey Park in the city’s north had lots of ticks of approval so that’s where I headed, after alighting the train at Wollstonecraft. You can also park at Russell Street, which is even higher, but spaces are limited. It’s apparently best that you check out Gore Cove after rain so I was there at the right time because only this very morning there’d been a shower.

Google indicated that Smoothey Park wasn’t far from the station, I just had to work out which way it was indicating to go. After a few steps in the wrong direction it was time to retreat and go down Telopea Street to its termination where it morphs into Smoothey Park and Smoothey, almost as quickly, begets the Gore Cove Track.

Frankly, I was surprised to find such a delightful rainforest in the middle of one of Sydney’s inner suburbs. Remnant turpentine trees can still be found in the upper section before you descend into the world of Sandstone Gallery Rainforest with its closed canopy of Coachwoods, Lillipilli and Sweet Pittosporum to the accompaniment of a gurgling stream surrounded by leaf litter and mossy rocks. On high though, occasionally glimpsed through the foliage, were the tell-tale piers of encroaching human habitation, probably holding up someone’s backyard swimming pool. The rainforest also supports a wealth of native wildlife, even if it is mostly unseen.

To say it was a sheer delight seems like an understatement.

The trail comes to its natural conclusion at the bottom where you reach an intersection. Across a small bridge there’s a trail to the right to Vista Street Lookout where apparently you can have panoramas over the harbour, but I didn’t know that then. After consulting an Irishman named John, I went left. Here, the trail rises again and water craft and the Shell refinery (that I didn’t know existed) come into view, framed by undulating Angophoras. Occasionally a fig tree could be seen with its roots wrapped around a sandstone outcrop to add even more variety.

Then it’s fairly obvious you’re finally leaving the walk as it curves away, up and over to Shirley Road. When you finally intersect with Shirley Road you have the option to extend and walk across to Badangi Reserve or turn right and cross over to Berry Island, neither of which my legs contemplated. Instead, it was back up the hill to the railway station, past real estate and gardens I could only ever dream about.

Frankly, I found it an idyllic and satisfying way to spend a couple of hours, though, if you’re there for the walk only, you could probably do it in just over an hour. However, might I boldly suggest you consider that there’s a whole lot more to ponder and simply chill out and soak up the atmosphere from time to time. It is rewarding.

Oh, and the walk I was really looking for? Balls Head from Waverton Station, but that’s for next time!

Have you ever visited the Gore Cove Track?