‘San Marino: Why you’ll be putting the world’s oldest republic on your bucket list’ 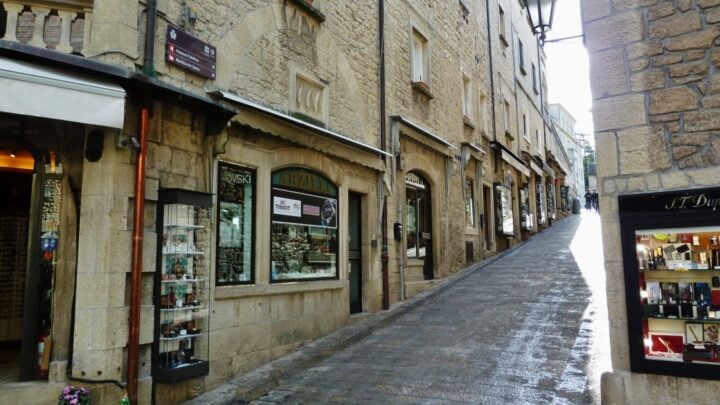 Totally surrounded by Italy, San Marino is the oldest surviving sovereign state and constitutional republic in the world, having been founded in 301AD by stonemason turned religious hermit named Marinus. It is just over 61 square-kilometres (24sqmi) in size, which makes it also the world’s smallest republic and the third smallest country in Europe, with a population of about 30,000. In fact, San Marino has more vehicles than people!

While most of our cruise companions visited Ravenna or Bologna, when I discovered the ship provided a tour to San Marino from the port of Ravenna, I jumped at the chance to visit.

The Republic of San Marino is a mountainous area with the capital San Marino city on the top of the highest mountain, Mount Titano. The city is a walled medieval city with three towers or fortresses — Guaita, Cesta and Montale (the first two are open to the public) — which feature on the republic’s coat of arms and flag.

The oldest is the imposing Guaita Fortress, which was built in the 11th century. We walked up the Passo delle Streghe (Witches’ Pass) that links the towers to visit the second one, Cesta. Legend has it that women thought to be witches were thrown off the cliff there. This is on the highest of Mount Titano’s peaks and overlooks the smaller towns, or castelli, and across to Italy, from a height of 756 metres above sea level.

There are several military groups in the republic maintaining their historical links in their uniforms and traditions. The oldest of these are the Crossbowmen who participate each year in the numerous contests and exhibitions, both in San Marino and abroad. Events take place in the Cava dei Balestrieri and include flag-wavers, musicians, master crossbow makers, standard bearers and locals dressed in period costume as lords and ladies. The other well-recognised group are the Guardians of the Rock, who are identifiable by the bright green colour of their uniforms and who perform a changing of the guard ceremony in the Piazza della Liberta every hour on the half hour during the summer months.

The city itself is quite manageable on foot, since you have to leave your car outside the walls, though the streets and alleyss are steep and winding in places. There are many shops and restaurants catering to tourists, who contribute largely to the economy, due in part to it being a tax free zone. The currency is the Euro, despite San Marino not actually being part of the European Union. No passports are required, but if you wish you can have yours stamped for a small fee at the post office.

As it was a guided tour, we were issued earphones and battery packs so we could hear the guide’s spiel from quite a distance if we lingered browsing in shop windows or taking photos. Leading us through the old main gate (St Francis Gate), she explained the history of the republic as we moved past various points of interest, such as the neo-Gothic Palazzo Pubblico (Parliament Building 1894), which was modelled on the one in Florence. It overlooks the Piazza della Liberta, which covers ancient cisterns for storing rain water and once utilised as the water reserves for the population. The statue is the Sammarinese version of the Statue of Liberty, donated to the city in 1876.

We also visited the two main churches — the Basilica di San Marino, and the 14th century Chiesa di San Francisco. The basilica was built in the early 19th century but parts of it, including its bell tower, date back to the 1600s as does the church of San Pietro next door. The basilica houses a small urn, which contains the bones of St Marinus, the founder of the city, as well as a shrine containing the top of the saint’s skull. The much plainer church of St Francis was built in 1361.

After the official tour we had free time for shopping and to sample the local pasta, cheese and wine in one of the restaurants before re-joining our group. The food here is virtually Italian and so is the language spoken, so there was no problem reading the menu!

San Marino is well known for its ceramics, reproduction weaponry and model racing cars. There are a number of museums and galleries with these items displayed. It is also well known for its colourful stamps and rare coins. In fact, for many years, my only knowledge of this country was via my stamp collection, which contained the beautiful colour photos that came into vogue back in the early 1960s. Having the opportunity to visit this unique place finally satisfied my curiosity about it.

Have you been to San Marino? What's the most underrated travel destination you've visited?