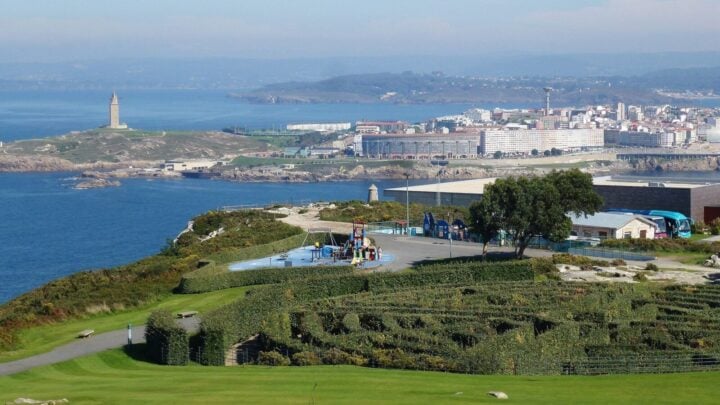 A Coruña is a port city on a promontory in the Galicia region of northwest Spain. Source: Liz Sier

The first stop on our Iberian cruise out of Southampton was actually A Coruña, a city on the north-west Atlantic coast of Galicia, Spain. And we did manage to find time to tour it briefly in the afternoon before heading back to the ship, but our main focus that day was the renowned Santiago de Compostela — the end point for the pilgrims who do the rewarding yet challenging Camino de Santiago. This required a very early start as the city is about an hour inland from A Coruña.

Also known as The Way of Saint James, the walk was one of the most important Christian pilgrimages during the Middle Ages. The reason was that the remains of Saint James the Apostle are deemed to be buried within the Cathedral of Santiago de Compostela, in recognition of him bringing Christianity to the Iberian peninsula. In fact Sant Iago is the Spanish equivalent of Saint James. Over the centuries the pilgrimage gradually fell out of popularity till very few completed it. But in 1987 the route was named a UNESCO World Heritage site and today it attracts pilgrims in large numbers from all over the world.

Films, documentaries and literature have all proved a powerful influence, so that by 2015 it had attracted over 260,000 pilgrims to complete the Camino in that year alone. Interestingly, it is not compulsory to begin the journey in France, where it traditionally was begun, nor to travel by foot. There are many routes actually chosen and as long as the pilgrim covers at least the last 100km on foot or 200km by bicycle, it is considered enough to qualify for the official accreditation certificate or compostela.

It is also important to have the pilgrim’s passport or credencial stamped at various lodgings and checkpoints along the way and to declare that at least part of the motivation for the pilgrimage is religious. This passport enables the pilgrims to gain free or cheap accommodation and meals as there is a great tradition of hospitality extended towards them. They can also be recognised by their walking staffs and their scallop shell talismans that they wear about their person or attached to their backpacks. The shell symbol is also seen on posts and signs along the Camino in order to guide pilgrims on their way.

With a feeling of being somewhat of a fraud, eight of us from the ship arrived by minibus just downhill from the cathedral! Our tour guide, Laura, led us through the streets stopping occasionally at cake shops so we could sample the iconic sweet treats touted for sale by the locals. These were the Pedras de Hércules (chocolate and almond ‘pebbles’), Caprichos de Santiago (meringue-like almond biscuits) and the Tarta de Santiago (rich, moist almond cake dusted in icing sugar). It was too hard to refuse some purchases!

As it was early in the morning the crowds were not too big, but already we could see pilgrims arriving with their backpacks and walking sticks. Traditionally pilgrims would enter the cathedral on the western side via Obradoiro Square (Praza do Obradoiro) and its Pórtico da Gloria, so they could then touch the pillar carved with the figure of Santiago in the narthex as a final gesture of arrival. However this whole area was under restoration during our visit so we entered on the south side near the fountain, through the façade das Pratarías (the façade of the Silverware).

The cathedral is the largest Romanesque church in Spain and even one of the largest in Europe, being 97m long and 22m high. Around the central nave is a myriad side chapels and bays with wonderfully ornate altars, paintings and statuary. Some of these provided masses in other languages during the course of the day, as there is only one main pilgrim mass at midday in the central nave of the church. This is the culmination of the pilgrimage, when on special occasions a huge thurible or Botafumeiro is swung on ropes and pulleys to dispense huge clouds of incense. A smaller one is used at other times.

At the main altar end of the nave is an enormous canopy with an ornately decorated statue of Saint James, which pilgrims queue to kiss via a narrow passage and stairs behind the altar. We settled for a hug, before heading below to the crypt visit the tomb of Saint James and the relics two of his disciples, Saint Theodorus and Saint Athanasius. Right at the other end of the nave is a large statue of Saint James, in the form of a knight from the medieval legend where he intervened in a battle between the Christians and the Muslims.

Leaving the cathedral we walked through the old part of town, past where the pilgrims were queuing to get their compostelas, and out to Alameda Park for great views back over the city and especially the cathedral. Then it was back to A Coruña for a great tapas lunch and some shopping.

Following that, Laura took us for a quick bus tour of the town, ending up at the Tower of Hercules, the symbol of the city and the only lighthouse on the UNESCO World Heritage site list. It is an ancient Roman lighthouse, 59m high, atop a hill 60m above sea level, looking out over the North Atlantic and considered to be the oldest operating lighthouse in the world. Originally only 41.5m high, it was added to in the 18th century with a neoclassical fourth storey. Its name comes from the legend of Hercules slaying the giant Gerión and burying his body on that spot. At the foot of the tower is a visitor services and interpretative centre, which displays historical information about the tower and surroundings including its strategic importance in Roman times.

Another legend tells of the Celtic King Breogán, who founded a city on this spot, constructing the tower so his sons could see across to Ireland, which they eventually conquered. Among the many sculptures in the surrounding park there is a huge statue of Breogan, by José Cid. Other sculptures include that of a rather corpulent ferryman Charon who took souls over the sacred river to Hades, by artist Ramón Conde.

Surrounding the tower there are many other installations linked to the history of the area. At the furthest point of land is a huge disc known as The Rose of the Winds, by Correa Corredoira, which depicts a nautical rose with symbols representing the various countries and regions which make up the Celtic nations.

After a quick trip out past popular Orzán and Riazor beaches we found ourselves at another lookout point on San Pedro’s Hill, where we had great views over A Coruña with the Tower of Hercules again in the distance. It had been a really full day and we were very pleased to be back on the minibus and heading back to the ship — looking forward to arriving in Portugal the next day.