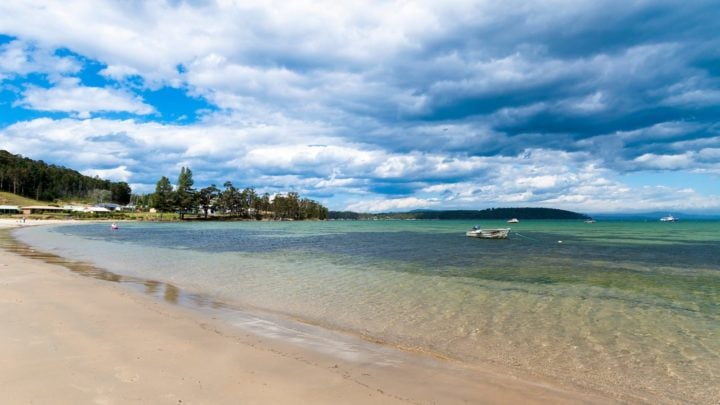 Have you been dreaming of nomadding around Australia? Right up until the coronavirus pandemic I would have said it was a great idea! However nomadding has changed greatly since Covid-19.

The problems I was encountering on a daily or weekly basis as a nomad, I had learned how to fix or adapt to. We were travelling along happily, enjoying the sights and experiences and doing quite a bit of fishing (which I enjoy). I never believed we’d end up where we are!

We are sitting in a caravan knitting with freezing toes, no fishing, and are terrified the police are going to turn up on the doorstep and not believe our nomad status. What’s changed exactly? We have a whole different set of issues as a nomad. Location has become important, our car identifies us, we are not known as a local. Where do we go now?

We started in September 2019, heading from Brisbane with our 23-foot caravan. We travelled south to Sydney on a trial run. We’ve stopped at a lot of places along the way and familiarised ourselves with towing the van and encountered a few issues along the way.

There have been many wonderful places to stay and we have sampled excellent seafood too. Where the food was really good, we stayed and fished for a while.

I learned to reverse the van, replace anodes, improve a tow ball weight, put up anti-flap kits, pump airbags in the springs, and much more. We returned to family in Brisbane and the Sunshine Coast and had a few things fixed on the car and caravan. While we were there we experienced two large hail storms and the heat of summer, so we decided we were going to head south again to escape it all.

We bought a ticket on the boat to Tasmania, drove through the fires, and it was then we decided to spend at least nine months there or it would not have been worth the price of the ticket.

When the coronavirus pandemic hit we were in Dover, which is 80 kilometres south of Hobart and only one town from the bottom of Tasmania. We had made our way around the north-west of Tasmania and settled in this little fishing town, as we heard the fishing from the wharf was excellent. The ban on borders put an end to our travels.

We thought if we stayed in Dover we could visit a lot of the south without moving the caravan or having to take it down dirt roads or cover lots of extra miles. In particular we chose Dover as it had television and internet coverage with Telstra. We’d experienced a week of no television and only Telstra in northern Tasmania, having changed from our previous network weeks before we arrived.

For groceries, we could shop locally in Dover, travel 22km to Geeveston, go 44km to Huonville or head to Hobart. We found Dover to be somewhat expensive, so would travel the 22km to Huonville and stock up each fortnight.

We were greatly welcomed as nomads and settled into a pattern of fishing from the local wharf before the high tide. We would have regular barbecues, sitting round the fire with other permanent residents in the caravan park, and go for lovely drives and walks. We enjoyed the ducks, rabbits and wallabies that roamed around the park and our little dog enjoyed lots of walks.

We quickly noticed how fear changed people and their ways when coronavirus hit. That reactive part of your brain takes over and controls your actions. People entered the ‘flight-fight-freeze’ mode where you become self-protective and lose the ability to think clearly. We saw it with the hoarding of toilet paper and other supplies. However, on a personal level, I experienced other people’s fear when I tried to book into a local doctor for an overdue procedure.

After initially accepting my appointment, I was quickly contacted and told that the doctor would only be seeing local patients. He would not be able to see me. There was only one doctor at Dover, so I contacted Geeveston and made an appointment there.

Perhaps I was imagining things, but I felt that we were getting disapproving stares from people serving us at the local supermarket. I noticed looks from locals whenever we would pull up in our vehicle, which has Queensland state number plates. I did my best to ignore the stares.

We were enjoying our routine when the manager of the caravan park turned up. A phone call had been made on behalf of a ‘frail lady’ who lived next door to us in the park. There was some concern that because we were from Queensland we would pass on coronavirus to this lady. It didn’t seem to matter than neither my companion nor I had exhibited symptoms of Covid-19 or that the ‘frail lady’ could venture out every day to take her large dog for a walk.

The manager advised us that the complainant had asked for us to be removed from the caravan park, advising that we should be kicked out of Tasmania too. However, he also said that we were classified as ‘essential travellers’ and permanent in the park, which afforded us every right to stay exactly where we were.

According to the information available to us at the time, as nomads who do not own a home and/or do not have a home to return to, we are ‘essential travellers’.

‘Essential Travellers’ are nomads who do not own a home and do not have a home to return to. In turn, nomads with Queensland Number plates are allowed to keep their number plates for the state they registered in, until they run out, which in some cases may be months later.

The police also contacted the caravan park. The complaint about us had also been lodged with them, in addition to a further complaint about international workers who had been living in the caravan park for several months before our arrival. We were grateful to the park manager who informed the police that we were permanent residents and that the complainant should “mind her own business” and he would not be told how to run his caravan park. The lady was afraid she would catch coronavirus from one of us or all of us by the sounds of it.

The conditions here are freezing. We’re experiencing mornings of 2C and gale-force winds regularly howl across from Antarctica. We are stuck, and I can do nothing but knit to pass the time. At least the blanket I’m knitting will take my mind off those fearful people around me and we will certainly need the blanket’s warmth if we’re here for the winter!

Were you travelling when coronavirus restrictions came into place? How have you been affected?