‘Sentiero degli Dei: The spectacle of hiking Italy’s Path to the Gods’ 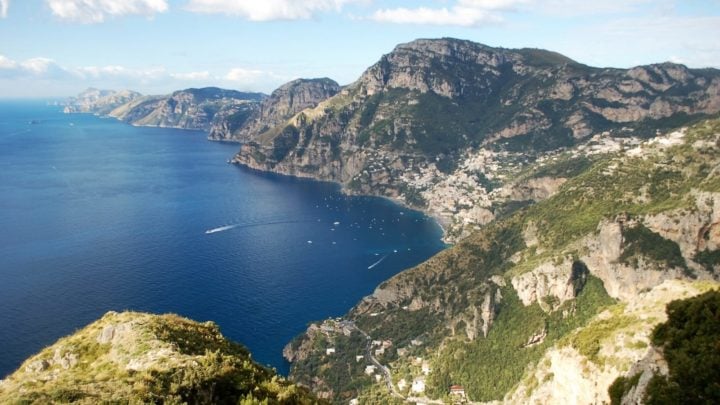 Ian traversed the 'Path of the Gods' on the Amalfi Coast of Italy. Source: Ian Smith

It entailed a 50-minute bus trip to Amalfi, a 20-minute wait and then another 30-minute bus trip upwards to a town called Bomerano on the heights that dominate the Amalfi Coast in Italy. From there it’s a bit of guesswork until you reach the sign Via Sentiero degli Dei — Path of the Gods. How could one resist?

The track unfolds along ancient trails, past terraced hillsides, some in use, others succumbing to disuse and the ravages of time. Elsewhere the cliffs rise dramatically above and disappear below. This is not a place for those with acrophobia but the further you travel the more scenic it becomes, though I found it hard to believe that was possible.

Others share the trail. First there is the slow old Italian duo with their walking sticks then the man with the gun over his shoulder. He was hunting quail.

Next was a man unloading a mule, his only means of servicing the area. Then I came across a tour group from Peregrine Travel led by Francesco, a man born in New York who now lives here. Amazingly his group were Australian, all 15 of them. Unfortunately three were from Geelong and we all know what they wanted to talk about. Francesco lamented that his normal clientele of Americans and Brits had severely declined, but had been replaced by mainly Aussies.

I stayed with them till we came upon two other locals with four mules collecting wood. You can believe me when I tell that there’s the same amount of room on the trail then as when two buses pass on the Amalfi coast road, i.e., none. It was frightening when I looked behind me as one of the logs brushed me and I glimpsed the chasm below.

The white specks of Positano were looming larger after three hours when I walked into one of the high villages and on to an actual road. My feet were pleased.

I continued on past Monte Pertuso, which means ‘a mountain with a hole in it’, before descending to the motel past lonely outposts and cascading waterfalls. A shower and a rest were had but there was more in store.

Walking past the gaily lit restaurants that night we chose the Saracens because it was crowded. The atmosphere was lovely with a mandolin and guitar being picked for background noise. However, after an hour a silver-haired gent arose from a table and, with appropriate hand gestures, sang one song then ‘O Sole Mio’.

He arose another two times for ‘Santa Lucia’ and ‘Funiculì, funiculà’ among others. Turned out he was an opera singer and it was his birthday. Was it enjoyable? Let’s just say we gave him a standing ovation. Do I really have to leave Italy?

Have you been to Italy's Amalfi Coast? Had you heard of the Sentiero degli Dei?