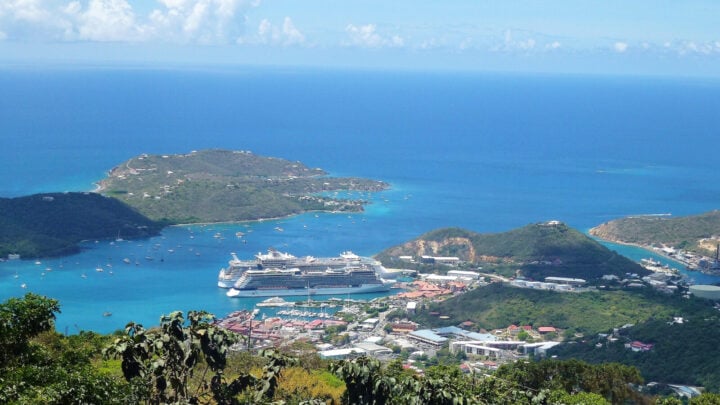 The capital of Charlotte Amalie was named in honour of Denmark's Queen. Source: Liz Sier

The final leg of our Caribbean cruise took us to Antigua and then St Thomas in the US Virgin Islands. We had been cruising for nine days and still had five more to go. We had visited Aruba, Curacao, Sint Maarten, Grenada, Barbados and St Lucia and enjoyed every minute, even the sea days.

Antigua
Antigua is the main island of the country of Antigua and Barbuda and its capital is St John’s, where our cruise ship docked. The country is very reliant on tourism, not only from the cruise ships but also from the smaller yachting and sailing community, due to its safe and attractive harbours, particularly near English Harbour Town and the village of Falmouth. A number of hotels and resorts are located around the coastline and many celebrities from the sporting and entertainment worlds have homes here. Britain’s settlement of the island in 1632 and Antigua’s affiliation with the Commonwealth of Nations since 1981 explains why the game of cricket is popular here. The island has produced four superlative cricketers in Andy Roberts, Richie Richardson, Curtly Ambrose and Viv Richards. The new cricket stadium is named in Viv’s honour.

We were treated to a tour of the island with Scenic Tours Antigua in a small bus for eight. The island’s economy was founded on sugar production and remnants of that industry can still be seen. Our tour took us through the parishes of St George and St Peter as we made our way south to the viewpoint of Shirley Heights in the parish of St Paul. From here we had exceptional views of English Harbour, with Nelson’s Dockyard – a restored British colonial naval station – the world’s only remaining Georgian dockyard still in use. It gets its name from Lord Horatio Nelson, who spent some time there developing the port when it was a base for British naval domination in the area. Then we were off to do a tour of the dockyard.

The site itself is a quaint step-back in time, with timbered cottages and former military barracks, craft shops, restaurants and two restored 18th-century hotels: the Admiral’s Inn, where we had lunch, and the Copper and Lumber Store hotel. The former Naval Officer’s House is now the Dockyard Museum, displaying ship models, mock-ups of English Harbour, displays on the people who worked there and typical ships that docked, silver regatta trophies, maps, prints, antique navigational instruments, and Nelson’s very own telescope and tea caddy.

On our return to St John’s, more great views of the rugged coastline were afforded at Blockhouse Hill, looking out to the Atlantic Ocean. The people of Antigua claim they have 365 beaches on the island. I’ll have to take their word for it!

St Thomas, US Virgin Islands
According to the website CruiseTT, this port was going to be brimming with cruise passengers, as five big ships were due in that day. St Thomas is one of the US Virgin Islands. The capital, Charlotte Amalie, was established in 1672 after the arrival of the Danish West India and Guinea Company and the town was named in honour of Denmark’s Queen. It has been a US territory since 1917, and is reputed to be very good for duty-free shopping, but the thought of crowds did not entice me. We decided that the best thing to do was get a taxi and clear out to the other side of the island. However, when we got down to the bus/taxi rank, we found a number of small bus drivers spruiking for passengers, so we joined about 10 others and set off for an island tour. They call these buses ‘safari’ taxis, as most of them are open-sided and play cheerful Caribbean-style music as you drive along, while the driver is able to give a description of the points of interest over the microphone.

Our route took us up winding mountainous roads, which gave us panoramic views of the harbour at Charlotte Amalie, with the cruise ships at the two main docks. We stopped several times for photo opportunities, particularly for pictures of the famous Magens Bay Beach, which has mile-long white sands and is frequently voted the best beach in the Caribbean. Many American cruisers we met on board took the opportunity to spend their day there, since they visit the Caribbean islands so often.

At the top of Crown Mountain, the highest point on the island, we called into the Mountain Top duty free store and cafe, which has a huge observation deck and afforded us more great views of this photogenic island. We could see right over to the other US island of St John and the British Virgin Islands. The passengers in our bus took full advantage of the shopping for clothes and souvenirs, as well as the popular banana daiquiris for sale at the bar.

On the way back to town, the driver pointed out the old tower of Blackbeard’s Castle (now part of a holiday rental complex). Originally called Skytsborg, it is a five-storey conical tower the Danes built in 1678 to serve as a watchtower overlooking the harbour. Pirates were said to maraud in the area, but whether Blackbeard actually had any castle here is speculative.

Nevertheless, the town still boasts the oldest standing structure in the Caribbean – Fort Christian – which was built about 1676 to defend the early Danish settlers. It later became an administrative centre, a residence for the governors, a prison and a police station, before being turned into a museum. Unfortunately, when we were there it was closed awaiting restoration, which – although still ongoing – now provides exhibits on the history of the Virgin Islands from the Stone Age to the present, as well as a natural history section, a furniture collection from the Danish period and an art gallery.

Two more sea days and we were back to Florida’s Fort Lauderdale. It was very sad to leave the ship and say goodbye to our new-found friends.

Have you visited these locations in the Caribbean? What did you think of them?