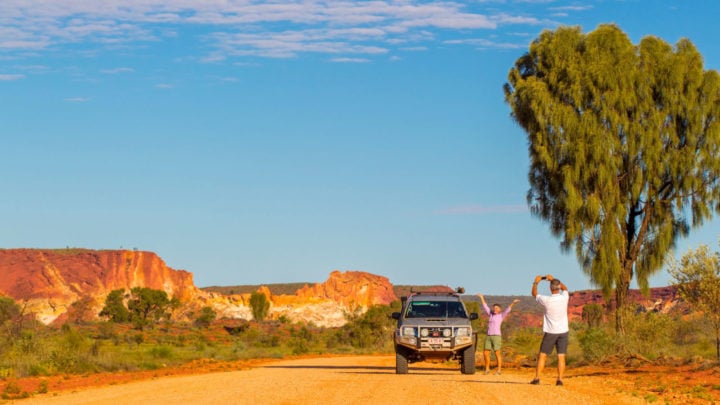 There are so many natural wonders to explore in the Northern Territory.

The Northern Territory (NT) is not your typical road trip. It’s a land of vast red landscapes, brilliant blue skies, sparkling star-filled nights, wondrous wildlife, character-packed towns, once-in-a-lifetime experiences and eye-opening natural wonders. There’s never been a better time than right now to tick off these natural Australian icons — the West MacDonnell Ranges, Karlu Karlu/Devils Marbles, Nitmiluk National Park and Litchfield National Park. These bucket-list destinations suit all ages. And the best thing is that the road is bitumen all the way.

Nestled at the foothills of the craggy red-rock West MacDonnell Ranges and on the banks of the mostly dry Todd River, Alice Springs is no sleepy hollow. It’s worth spending a few days discovering its cafe culture and culinary delights, wildlife experiences, adventure activities and waterholes set amongst the surrounding gorges.

Jumping on the Red Centre Way will take you to explore more of West MacDonnell National Park and soon you’re on the way to Uluru-Kata Tjuta and Watarrka National Parks.

Leaving the city lights behind, follow the easy, straight drive ahead and break up the trip at the wonderful and wacky outback towns along the way. Straddle the Tropic of Capricorn just 30km north of Alice Springs. The latitude’s marker, installed for Australia’s Bicentenary, is locally designed. Marvel at the sculptures of ‘Anmatjere Man’ and ‘Anmatjere Woman and Child’ at Aileron. Fossick for garnets at Gemtree and check out the pressed tin ceiling, patterned cement blocks and cellar at the earliest hotel built on this north-south road at Barrow Creek.

Make sure to stop for lunch at Wycliffe Well — Australia’s UFO capital. It’s a quirky mirage complete with a holiday park and restaurant. You should also stop at Karlu Karlu/Devils Marbles. These six-metre-high balancing rocks are fossilised Rainbow Serpent eggs according to the Warumungu Aboriginal people.

Further on Australia’s golden heart, Tennant Creek, began life as an Overland Telegraph station in 1872, growing with the 1930s gold rush and surrounding cattle droving — it’s worth stopping in and having a look.

Cool off, canoe or stroll the walking paths at popular man-made Tingkkarli, also known as Mary Ann, the town’s water supply. Visit the fascinating Nyinkka Nyunya Art and Cultural Centre. Wander through the arid zone gardens with an audio tour and learn about the plants, landscape and life here for local Aboriginal people.

More unusual and beautiful places to stop at include the mudbrick Banka Banka Homestead and Renner Springs and lagoon — a bird-watcher’s paradise where honey-eaters, falcons and herons abound. The 360-degree views from Lubra’s Lookout are breath-taking. Lake Woods near Elliott is also a haven for birds.

Lunch at the colourful, corrugated iron clad Daly Waters Pub is a must. Built in 1930, it’s seen bar brawls, street fights and many hungry cattle drovers during its settlement days. Today it’s a jolly place with every nook and cranny covered in bras, hats, foreign money and an Irish hurling stick! People can’t resist leaving their mark. If you need to break up your drive, Daly Waters Pub also has a variety of accommodation options.

At Mataranka the outback meets the tropics. The cooling calm of the palm-lined, spring-fed aquamarine waters of Mataranka Hot Springs is a refreshing reprieve. Nearby Bitter Springs also in Elsey National Park is another idyllic thermal pool.

Jeannie Gunn’s book and film, We of the Never Never, made the area famous. Discover their lifestyle at Elsey Homestead, find the names of many characters at Old Elsey Cemetery, and learn the rich history at the Never Never Museum.

If you don’t want to walk the many trails, cruise or canoe any of the 13 ancient gorges, take a helicopter flight over them and nearby Edith Falls.

If you’re feeling hungry, foods not to be missed in Katherine are Black Russian Caravan’s massive gourmet toasted sandwich; the homemade cakes at Finch Café and at Katherine Hot Springs; and Pop Rocket Café’s famous salmon stack. All have fantastic coffee too!

Add to your list, the fine dining Nabilil Dreaming Sunset Dinner Cruise on Nitmiluk (Katherine) Gorge and Marksie’s Stockman’s Camp, a traditional camp oven meal under the stars to your list.

Don’t forget to stroll Katherine’s arts trail to connect with the culture and history of the area.

A 90-minute drive from Darwin, Litchfield is a popular destination for locals and visitors. Many of the waterfalls and attractions also have paved pathways too, so aside from being relatively close to the city it is also one of the Northern Territory’s most accessible national parks. See towering cathedral and magnetic termite mounds, sit under waterfalls and stroll the paths around Wangi and Florence Falls, or make your way through a series of natural baths at Buley Rockhole.

For a birds-eye view of this tabletop escarpment region take a helicopter flight with NT Air at Wangi Falls. Nearby, Batchelor is gateway to Litchfield and has numerous accommodation choices.

Australia’s most northern capital, Darwin, is like no other. Its blend of friendly characters, waterfront dining experiences infused with local and ethnic flavours, and seriously impressive sunsets bring together all the best things in life. Discover the city’s military history, magical markets, relaxed tropical lifestyle, and don’t miss the chance to smile at a crocodile!

After spending two weeks following in the footsteps of pioneer John McDougall Stuart, you’ve earned ‘explorer’ status. Just make sure you rock into Darwin in time to sit on Mindil Beach and enjoy that spectacular red ball dropping into the Arafura Sea.

This article first appeared on Tourism NT and has been reproduced with the author’s permission.

If you can’t wait to hit the road. The Territory is the answer.

Where can I relax? Where can I go to be in the sun and not winter? What can replace my overseas trip? Where can I go for my next road trip? No matter what your concern, worry or question, the Territory has the answer. Visit northernterritory.com/drive today.

Are you planning a trip to the NT?