Calling all Star Wars fans: You might recognise this idyllic Irish island 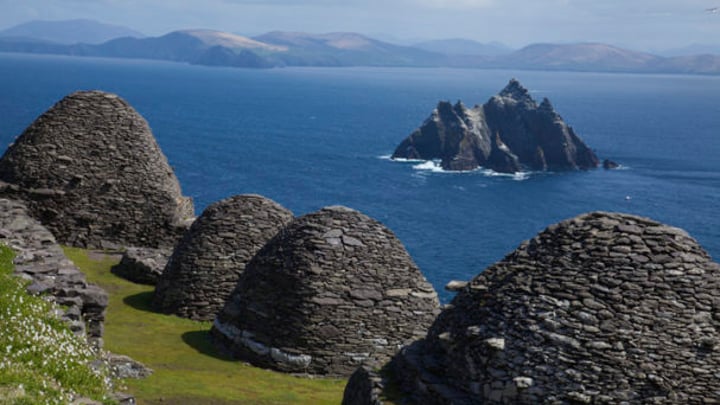 Thanks to the movie Star Wars this gorgeous location in Ireland is receiving a tourist influx. Source: Getty.

As any Star Wars fans will be aware, in 2017’s Star Wars: Episode VIII – The Last Jedi, Luke Skywalker broke his self-imposed exile on Ahch-To, the place of the first Jedi Temple. While in the Star Wars universe the island is said to be one of the most remote and isolated places in the galaxy, in reality the idyllic location is actually in Ireland – and, better yet, the blockbuster filming location is readily accessible by boat during summer.

Since appearing on the silver screen, Skellig Michael Island, a UNESCO World Heritage Site, has soared in popularity and fans of the sci-fi franchise have flocked from near and far to visit the site where Mark Hamill and Daisy Ridley stood, causing tours to book out months in advance.

With many travel companies offering tours of the island including a walk or climb around the most famous sites from the movie, be prepared you won’t be alone. And if it’s no other tourists crowding your space then the island’s puffin population will be sure to make their presence known. In fact, it is a wonder of the modern world that none made their way into the movie, editing them out of each scene must have been a very laborious task.

Read more: 7 unique adventures you can only have in Ireland

Along with puffins, there are also more than 23,000 pairs of gannets that nest on the island, making this spot the second largest gannet colony in the world.

According to Skyscanner, the best time to visit the island is during the Irish summer, particularly between July and August. But you might want to start planning now, because tours to the island are often booked up to six months in advance.

The island is actually made up of two islands and the spectacular summit soars 218 metres out of the sea.

Read more: 6 magical castles to visit on a trip to Ireland

Those who have been lucky enough to visit the island have send it is nothing short of breathtaking. And while many of the people who visit now are fans of Star Wars, you don’t have to be a film buff to appreciate the beauty.

“The weather was absolutely beautiful, with calm waters for the 3 hour round trip. It is an intense ride on a small boat with maybe 10-12 people but to get up close and see the islands is unforgettable,” said Ally from Ireland.

Kate from the United States agrees, saying it was the highlight of her trip to Ireland.

“This was my favorite adventure in Ireland. You take a small boat out and the ride is intense, definitely not for those who get seasick easily,” she said.

“When you get to the island you walk up steep stairs filled with puffins to the top where a monastery awaits. I feel so lucky that I got to experience this.”

Is Skellig Michael Island on your bucket list? Let us know in the comments below.