Back to the 60s: A blast from the past with groovy fun on a Community Holiday 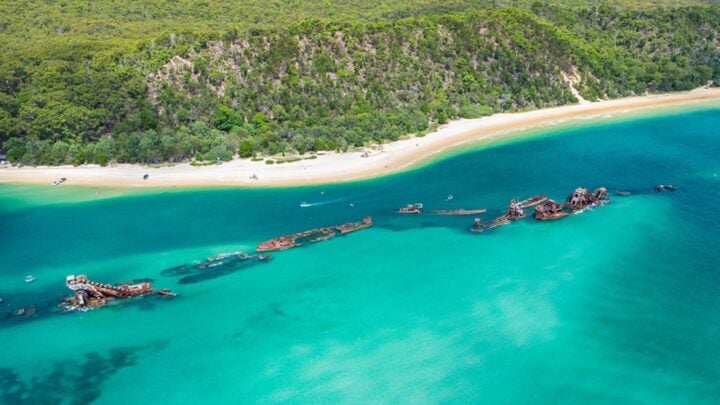 “Don’t go too close to the edge,” the coach driver warned. “A school teacher did last trip and the sand was so soft she sank down to her knees.”

We looked out at the calm lagoon on the eastern side of Moreton Island and wondered how it could be so deceptively beautiful when it obviously wanted to devour unsuspecting tourists.

The coach tour of the island was part of the itinerary of Travel at 60’s community holiday, Back to the 60s, a weekend my friend Lyn and I enjoyed in May. We’d had such a fabulous time on the previous group holiday that was all things ’70s themed at Kingfisher Bay Resort on K’gari (Fraser Island) the previous year, that we knew fun and frivolity sprinkled with learning would be guaranteed.

On Friday morning we were met at the ferry terminal by Wendy and Karen, our Travel at 60 guides for the weekend. We checked in our luggage, boarded the ferry, and crossed Moreton Bay to Tangalooma Resort. A quick buggy trip along the jetty and a short walk had us in the coolness of reception to collect our room keys.

Tangalooma is renowned for the nightly feeding of a pod of wild bottle-nosed dolphins that have been interacting with humans there for decades, starting with one dolphin the resort owners named Eric. When Eric brought a dolphin calf with her one night, she was renamed Beauty. Over the years people threw rejected fish and bait to Beauty who then started putting her head out of the water to look for a free feed. In 1992 the resort owners tried hand-feeding Beauty, and the tradition was born.

The feeding is so popular that registering your interest in participating is a must. Lyn and I considered the very cool evening, and the coldness of the water, and opted for watching from the jetty. The timber sides of the jetty provided ample seating for us and others who knew their shivering limitations. When the feeding started it was as wonderful to see the awed expressions on the faces of the children holding out the fish as it was the gentleness of the dolphins taking it. What particularly fascinated me was the power of these mammals as they swam under the jetty. One small flick of the tail and they disappeared.

Dolphins aren’t the only wild creatures to call Tangalooma home. Two families of kookaburras, the northern family, and the southern family, according to the ranger giving a very informative talk and offering tiny strips of steak to them, have their own distinct territorial boundaries. One family dares not encroach on the other’s territory for fear of swift retaliation. Curlews, on the other hand, wander wherever they want, disdainfully ignoring snap-happy visitors’ pleas to pose for a selfie.

As the route of our coach tour was determined by the tides, we drove straight across the island to the eastern side and along the beach, stopping at the once-tidal lagoon, then on to explore the abandoned WWII concrete military bunkers. Getting inside them required a torch and agility in negotiating the slime accumulated over years of rain. If graffiti is any indication, the bunkers, set back from the dunes and almost hidden by trees and bush, had obviously hosted more than soldiers over the years. Apart from the obligatory swear words, there were some drawings of the Teenage Mutant Ninja Turtles on the concrete walls that showed artistic talent but lacked anatomical knowledge.

Next, we travelled inland to the Castaways Café and Store for lunch. When I chose a bucket of prawns, I was expecting half a dozen large ones in a paper cup, but no, a good dozen came in a small metal bucket. All the meals were more than ample, even for our salt-air-enhanced appetites. No wonder we were grateful for a walk up the beach when we stopped for several breaks on the way back to the resort.

One break offered the opportunity to scale an enormous sand dune and skim down it to the beach. None of our group participated. Our childhood selves would have delighted in sliding down, but our over-sixties selves were intimidated by the thought of climbing up!

An evening boat ride around the many wrecks scattered through the water not far off the beach revealed how well nature had reclaimed the rusting hulks. No wonder the island is a fisherman’s paradise.

Wendy and Karen had organised a 60s trivia night on Saturday and encouraged our group to dress appropriately. Lyn and I donned wigs and costumes and went as Sonny and Cher. Being the shorter, I was Sonny. My black wig was big enough to cut off some strands to make a moustache. Lyn’s daughter had made us signs that said, “I couldn’t turn back time”, highly appropriate considering we hadn’t aged as well as Cher had.

The trivia questions really stretched our memories but provided great fun. A smorgasbord dinner, plenty of wine, dancing, and singing. Lots of fun. It was a merry group who trudged back to our rooms later that night. Our building was a bit removed from the venue, but a buggy was available for anyone who needed it. The resort is stretched out around the beach and offers lots of recreational activities, but walking to and from our room was enough for us.

For me, the weekend was the perfect combination of organised activities and free time to explore the beach, the resort shops, the Eco Centre. And did I mention those sumptuous cakes in The Coffee Lounge?

The much-loved themed getaway by Travel at 60 is back for another year, and this time the troops are heading to the quaint coastal town of Batemans Bay on the south coast of NSW.

Taking place over three nights from the 18th of May until the 21st of May, you’ll explore the beautiful Eurobodalla region by day and unwind by night with some 1970s-themed fun. Highlights of the trip include a welcome BBQ, where you can get to know your fellow travellers, an interactive Game Show trivia night, and of course, an epic disco night complete with a DJ and dance floor.

But hurry! Spaces are limited.

If you are looking to go on holiday with other like-minded travellers, check out our community holiday collection!