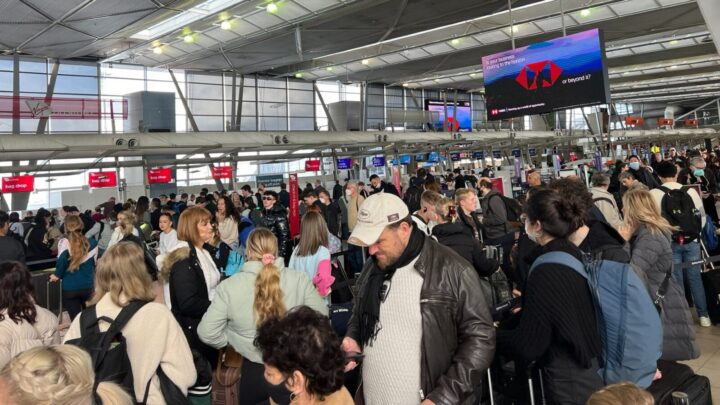 Aussie travellers continue to face frustration as airports brave yet another round of pre-departure chaos, with millions of passengers scheduled to jet off for the school holidays.

Both Sydney and Melbourne Airports have estimated that over 2 million passengers will pass through their facilities between July 27 and July 17, these dates are set to become the busiest periods for airports across the country since pre-pandemic times, easily surpassing the 1 million airport travellers seen over Easter.

Since being advised to arrive at least two hours prior to their departure time, Melbourne airport saw hundreds of people line up for check-in as early as 6 am- with lines going out past Virgin’s terminal door.

Line already out the door at @Melair Virgin domestic – even the airport chaplain is helping with baggage! @sunriseon7 pic.twitter.com/6k9luAFZi5

“It’s terrific to see the ongoing demand for air travel but we won’t sugar-coat the fact that the terminals will be busy during the school holidays, and there will be queues,” Sydney Airport CEO Geoff Culbert said.

“We are doing everything we can to get people on their way, including bringing an additional 60 customer service staff into the terminals every day to help manage queues and bring passengers forward in order of flight priority.”

Just a “outside the box” idea…. but maybe more staff would work better. pic.twitter.com/N2Hfvm8bYe

Speaking to 7News, Transport Workers’ Union Mike McNess says airports have been facing a shortage of skilled labour due to the staff cut down during the pandemic.

“We’ve now got a situation where a lot of the untrained and short-term causal labour that is coming to replace them are also now looking to leave,” he said.

“So we expect there to be a bit of chaos.”

Last July 16, Sydney airport held a mammoth job fair hoping to hire at least 5,000 people to aid with the influx of passengers.

Meanwhile, Swissport, a contractor for Qantas, has revealed that they will be paying baggage handlers an extra $50 a day until the end of the year in an aim to shore up their lack of workers.

The ongoing chaos has also brought hundreds of social media complaints from passages who have called out Qantas and Virgin for their lack of organisation and structure.

More chaos and delays at Sydney Airport as the consequences of @Qantas outsourcing of baggage & cleaning staff are felt by Qantas customers. Announcements now shift blame to Swissport the cut price labour hire company, but the blame lies with the decision makers at Qantas

As of Thursday, July 23, the airlines have said they were “pulling out all stops and working with airports and suppliers to ensure the upcoming holiday period is not impacted by the significant disruptions that customers faced over Easter”.