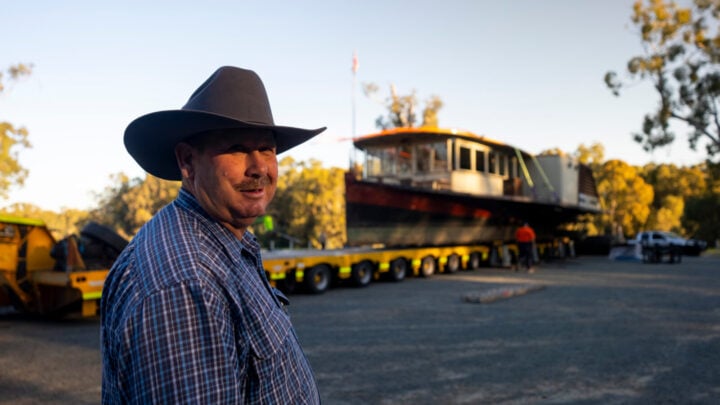 The inaugural cruise of the Pride of the Murray on the Thomson will be 18 June 2022. Source: Outback Pioneers

The Thomson River sunset cruise is among the absolute highlights of our over-60s group holidays to Longreach and Winton. It’s peaceful as it is beautiful as you take in the sights and sounds of the outback while watching the sky turn golden as the sun sets over the horizon. Now, this bucket list experience is set to get even more special.

A 100-year-old piece of pioneer history is on the move as the Pride of the Murray makes an epic move from its current home in the Murray River in Victoria to its new home in Longreach in outback Queensland.

The massive undertaking is the first of its kind at this scale and is the brainchild of Queensland grazier, lover of outback history, tourism entrepreneur, Richard Kinnon of the Longreach-based Outback Pioneers.

“This is believed to be the largest haulage of a marine vessel this old ever undertaken in the Southern Hemisphere,” Kinnon said.

“When I found out the Pride of the Murray was looking for a new home, I knew I’d found a genuine outback pioneering artefact we just had to preserve.

“The only problem – this perfect piece of Australian history is giant and 1,750 kilometres from Longreach.”

“To build a purpose-built boat from scratch would have been a significantly cheaper option but it didn’t meet my own brief which is for our Longreach-based tourism operation to remain true to history,” he said.

The Pride of the Murray was built in 1924 and was originally used to transport wool bales in Victoria. The vessell later had an engine fitted to transport timber to the mill at Echuca.

The Pride of the Murray was sunk when it was no longer needed to transport timber. Remaining well preserved below the depths, the boat was purchased by Captain Maxwell Carrington who wished to restore it. In 1977 the vessel was relaunched from Echuca Wharf and took on new life as a tourist vessel, beloved by all who step on board.

Moving such a prominent piece of Australian history certainly comes with its challenges as the advanced age of the vessel means it can only be out of the water for seven days before the timber begins to shrink.

Warrick Corney from Freightlancer has been given the mammoth task of moving the mighty vessel and although the venture has left him with several sleepless nights he believes alongside the Kinnon’s “true pioneering spirit” and their dedication to “history conservation” they will “make the impossible, possible”.

“It might sound easy but it is a massive undertaking,” Corney said.

“This is not a move that has ever been attempted before in Australia.

“It’s an extremely delicate operation. It’s a 100-year-old boat we are lifting out of the water and putting it on top of a trailer before we drive it from Victoria to Queensland. The route we have
specifically chosen because it’s quite straight and had less obstructions for a mega road train.”

Kinnon admits that although the journey won’t be without its difficulties it will be worth it in the end.

“We are putting a 100-old-year vessel like Noah’s Ark on a truck and bringing it to the outback of Australia,” he said.

“We’re passionate about educating people about Australia’s proud pioneering history and once the paddlewheeler is recommissioned, 100 people a day will get to relive an authentic river experience.

“The incentive for me and the Kinnon family is millions of tourists will get to enjoy riding the Pride of the Murray on the Thomson River for another 100 years,” Mr Kinnon said.

The inaugural cruise of the Pride of the Murray on the Thomson will be on June 18, 2022.

As we wait for the Pride of the Murray to take its inaugural voyage in June, you too can explore Queensland’s Outback by Tour, Stagecoach, Paddlewheeler & Train (Longreach-Brisbane) with Travel at 60.

Outback Queensland has always been a place for the adventurous and there’s no better way to experience the outback and its resilient pioneers (past and present) than this comprehensive itinerary across Longreach and Winton, ending with a rail journey from Longreach to Brisbane on the charming Spirit of the Outback. Get in quick – these departures are among our most popular, and are expected to sell out FAST.

Travel at 60 is taking bookings for outback adventures. Sign up for the Travel at 60 emailer here to get access to new releases and amazing deals as they arrive.