‘Songs from school days take me back and leave me bemused’ 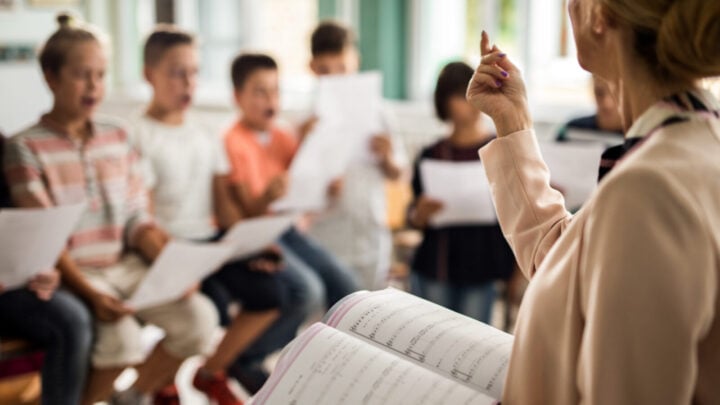 Looking back, the songs we were taught in primary school were highly irrelevant to our lives in suburban Australia in the 1960s. Source: Getty (models posed for photo)

I recently caught a video of three young sisters singing a cappella and it was not only hauntingly beautiful but the tune was one I remembered from primary school days more than half a century ago! It was so familiar but the words most definitely were not.

As a gift to their grandmother, the Staude sisters made a video of themselves singing a reworded version of ‘The Skye Boat Song’, which is the theme song of the popular UK television series Outlander.

Speed bonnie boat like a bird on the wing
Onward the sailors cry
Carry the lad who’s born to be king
Over the sea to Skye,
Loud the winds howl
Loud the waves roar
Thunderclaps rend the air
Baffled our foes stand by the shore
Follow they will not dare

For the uninitiated, ‘The Skye Boat Song’ is a late 19th-century Scottish song recalling the journey of Prince Charles Edward Stuart, aka Bonnie Prince Charlie, from Benbecula to the Isle of Skye as he evaded capture by government troops after his defeat at the Battle of Culloden in 1746.

Reminiscing, it strikes me as funny, no, downright peculiar that we had to learn these old foreign songs in primary school in Australia in the 1960s. Was it part of the curriculum? I doubt it. Perhaps it was just one teacher’s penchant? Aside from ‘The Skye Boat Song’ there was the beautiful New Zealand song ‘Pokarekare Ana’ – their unofficial anthem, a bit like our ‘Waltzing Matilda’. There was also the American marching song ‘John Brown’s Body’ and another ‘boat’ song, the ‘Jamaican Banana Boat Song’. You can sometimes still hear people singing Harry Belafonte-style “Day-O, Daaaay O, daylight come and he wanna go home.”

As most schools still do today, there was a formal farewell to primary school days as we headed off to a long hot summer before starting secondary school. The ‘formal’ part was a ball where all the Grade Six girls in our first long ball dresses, and boys in suits and ties sheepishly holding a corsage for their partner, had to perform songs and dances in front of our parents and teachers at the local Town Hall.

But, no, the evening’s entertainment did not include popular hits of the time, such as ‘The Carnival is Over’ by Australian pop quartet The Seekers. Nor did we do any modern dances, such as the Mashed Potato, The Swim or The Twist. Instead, we belted out Al Jolson’s ‘California, Here I Come’ from 1924, while waving crepe-paper-covered hula hoops in time with the lyrics “where bowers and flowers bloom in the sun, each morning at dawning birdies sing and everything. A sun-kissed miss said ‘Don’t be late’, that’s why I can hardly wait” and – roaring to a stupendous finish – “so open up those Golden Gates, California, here I come!”

God only knows why! It was all so breathtakingly irrelevant when we live in suburban Australia.

Later, we performed our well-rehearsed Progressive Barn Dance and the Pride of Erin with haughty stature: “Step, step, quick quick quick, stop. Back, back, quick quick quick back. Now crossover, crossover”. I can’t help but marvel at how the sheer bloody-minded repetition employed in those days has managed to unspool it in my head some 60 years later so clearly that it’s like a movie reel. Teachers today could… no, let’s not go there!

We primary schoolers in the recorder group were also required to wind up the evening by playing Australia’s then-national anthem, the one we played every Monday morning beside the flagpole at assembly, ‘God Save the Queen’. Everyone stood. “God save our gracious cat, feed it on bread and fat. God save our cat,” sang some little tyke in the audience. Yes, that was truly an unforgettable era – in more ways than one!

Which songs do you remember being taught in primary school?