The henhouse: From a palace to a corner shop 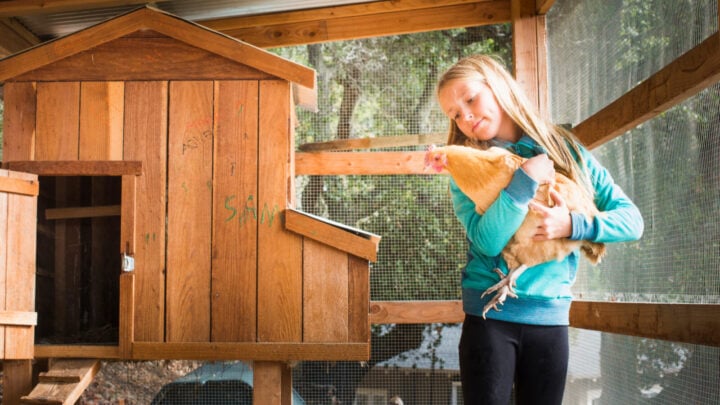 This blogger remembers the fun a good imagination can bring. Source: Getty

When I was a young girl growing up in a working-class suburb in New Zealand, we were blessed with an enormous backyard that Dad filled with loads of vegetables and fruit trees. At the very end of the yard next to a wooden fence that separated us from the park and the trees behind, was the henhouse. It was no longer used for chooks, so was empty. We kids claimed it as our cubby house. It was quite sturdy and made of wood with wire netting windows. Our imaginations ran wild – we could turn it into anything that took our fancy. It was shady under the trees, so often seemed quite mysterious and full of possible magic and secrets.

Dressed in Mum’s old curtains and hats, we made a palace full of princesses and queens. No princes or kings had a look in as we had no brothers. It was purely a female domain. We made a throne out of an old wooden chair covered with a scarlet velvet curtain. We made cardboard crowns and bossed each other around with our wooden spoon sceptres. My older sisters were always the bossy queens, so I felt more like a servant and soon lost interest in that particular game.

The next incarnation of the henhouse was a corner shop. We had a local corner shop where we went to get fresh bread and boxes of broken biscuits if we were lucky. From memory, it was a Four Square. Mum had an apron she had won from there, so we dressed up in that with various empty baking powder tins and custard boxes lined up. We had plastic money and an old toy cash register. We had hours of fun buying and selling to the neighbourhood kids. I loved ringing up the cash register and putting items into a basket for the lucky shopper. They were promptly returned so we could play all over again.

At the end of our street was a river. It was called the Heathcote River and was lined by beautiful willow trees. We would join with the other neighbourhood kids and build huts under the fronds which hung down to the river bank. If we fell in, we had to somehow get to the shore. I remember my little sister falling in and I only said I’d help her out if she gave me her lollies. We put old chairs and bits of furniture in these huts and they became hangouts where we planned our games. Role-playing and cries of “you’re not the boss of me” would fill the air as a neighbourhood bully would try to infiltrate. But, oh, we had fun being “mothers and fathers” even though we had no idea where babies actually came from, an old doll would be pulled out from under our jumper along with a few whoops and howls.

On a rainy day, a blanket draped over the dining room table became a secret place of wonder where we would put our dolls into shoebox cradles and read them stories. I reinstated that idea with my granddaughters recently and realised that kids today also like to make little cubby houses and secret hideaways. Using their imaginations they can create whole new worlds of wonder and exploration. Did you make cubby house’s when you were a child? And do you enjoy making them with your grandchildren?