Swings and roundabouts: Survival of the fittest in the old playground 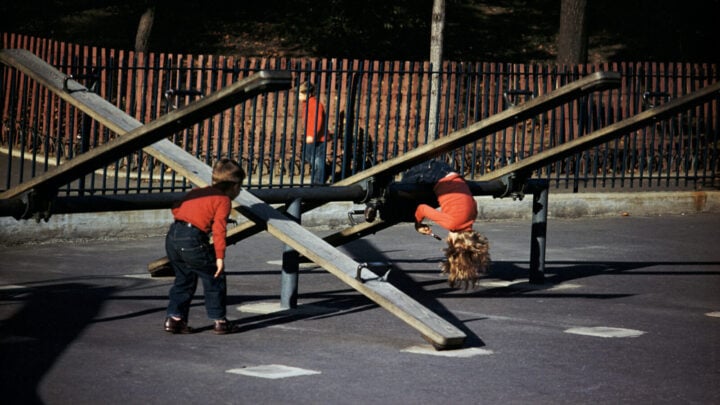 Children playing on see-saws at a playground in 1952. Source: Getty

My earliest memory of a playground is the death-defying, head-spinning, chunder-inducing, hang-on-all-at-all-cost, bone-breaking, dizzying merry-go-round that lived in my schoolyard, along with a slippery-dip that stood at least two storeys high and a set of towering monkey bars set on a concrete slab base. That merry-go-round was responsible for at least one broken arm of which I’m aware, a broken wrist, several dislocated fingers and scores of minor injuries. It was still there when I left that school nine years later.

Today, most playgrounds are very carefully designed and engineered to reduce the possibility of injury. They are meticulously lined with soft rubber mats interspersed with large sponge rubber pads to cushion any fall. In the 1950s and ’60s, there might have been some small areas of grass but — more often than not — most of the playground equipment was built on asphalt, concrete or gravel – none of which made for a very pleasant or soft landing.

The monkey bars had to have been at least two storeys tall and were literally a climb to nowhere.  You just kept climbing until you reached the top, then turned around, carefully, and started the equally treacherous descent. There were no safety nets or barriers. One false move and you’d quickly discover just how hard the concrete really was!

Those early playgrounds were fairly simple: a slippery-dip or slide, merry-go-round, see-saw, several swing sets, some more dangerous than others, and monkey bars, all on a nice rock-hard surface.

The slippery-dip didn’t look quite as dangerous, just climb the ladder to the top and slide to the bottom. However, there was always a long line up of kids waiting, half a dozen standing on the ladder, skylarking and pushing (as kids do) right to the highest step. Once over the top, there was nothing quite like flying down the metal slide in a pair of shorts or skirt after it had been baking in the sun on a hot summer’s day, resulting in near-third-degree burns. Every so often the sharp metal edges would nick you on the way down, and since there were no protective rails, it wasn’t too difficult to flip over the side.

There were several different styles of swings. Single swings usually had thick steel or wooden seats that chipped many a tooth. The rusted metal chains would give you orange palms after a while and of course the other kids would double-dare you to jump from the swing at the highest point of your arc.

The more dangerous though was the ‘plank swing’, which went left to right or side-to-side. There were no handles to hang on to, so you might end up sliding right up and down the length of the wooden plank as it picked up a daunting momentum, resulting in a very scary ride — and splinters in the bum!

With the see-saw, disembarking was the truly hazardous part. When the kid at the other end reached the bottom, you were left high and dry in the air. If they jumped off and you lost that counter-balance, there was only one way to go — down — and at a frightening speed, until you hit the ground with force.

Park playgrounds usually offered a different range of equipment, equally as dangerous, including the witches’ hat. Kids gathered around the outside of the ring and hung on while running faster and faster until the thing spun so fast your body was lifted off the ground and you were literally flying! It was great fun until someone barfed or accidentally let go.

A similar game was the Maypole, a steel pole with chains hanging from the top. Grab a handle and run like hell until you eventually became airborne. It usually resulted in the smaller kids eventually slowing down and bashing into the centre steel pole.

Of course there were more gentle games, like animal springers and other rockers. Many parks used old equipment, such as de-commissioned steam rollers and steam engines that kids could climb over, supposedly for fun.

If you could travel back in time, perhaps a bigger difference between the 1950s’ playground and those of today might not be the equipment, but rather the lack of any parental supervision. Not only were we swinging around like maniacs on all kinds of deadly steel contraptions but we were doing it pretty much unsupervised by any adults. Grown-ups back in the day had a tendency to “let them play”. I remember my own mum’s regular warnings, “Be careful, and if you break your neck, don’t come looking to me for any sympathy.”

Playgrounds today are much safer and more sanitised. The concrete and asphalt have gone and instead there’s rubber chips, sand and wood mulch. The rusty chains and steel apparatuses with sharp edges have been replaced with plastic and soft surfaces with rounded curves. There are strict government regulations and organisations set up to oversee playground standards. State laws and personal injury lawyers have also played a major role in changing the landscape, making playgrounds safer and “educationally interactive”.

On the other hand, perhaps those rag-tag, rough-and-tumble playgrounds from the 1950s and ’60s served as an early lesson about life in general. The world is not always an easy or safe place in which to play, and sometimes there are no soft places to land.

What memories do you recall from the playgrounds of your youth?