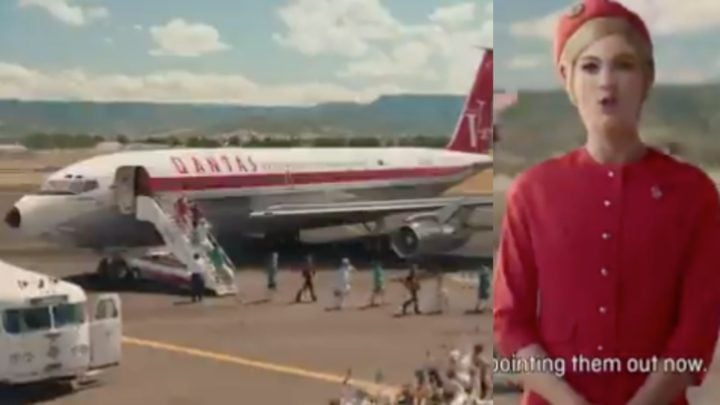 Qantas has celebrated its upcoming 100-year anniversary with the release of a new video, honouring the company’s incredible journey from a small country town to the skies.

Looking back at the decades past, the airline delves into the vast changes in aircraft, fashion and aviation, with the recreation of historical settings, hairstyles and uniforms. It took a year to make, but the result is a memory-inducing masterpiece, from the classic mullet of the 1980s, to moustaches from the ’70s and of course the various takes on the famed song, I Still Call Australia Home.

Some of the scenes were recreated in real life, others such as the original Avro 504 and the 1930a De Havilland 86, were brought back to life using computer generated imagery. It took months of research by the production team to collate the history of Qantas, looking through the national archives and aviation museums.

Take a trip down memory lane – all the way back to the roaring 20s – in our nostalgic, new inflight safety video. #Qantas100

They also used photographs and artefacts from the extensive Qantas Heritage collection to perfect the details of each scene, from original life jackets to the wall panels from retired aircraft that were retrieved from the Mojave Desert. Making it all that more special, the video features current Qantas staff in historical versions of their present-day roles with Alastair Fysh, the grandson of Qantas co-founder Sir Hudson Fysh, also making a cameo appearance.

In one scene, a woman named Allison, a current Qantas engineer can be seen at Sydney’s first international airport in the 1930s at Rose Bay. She wears traditional dress from that era and sports an old brown life jacket that was born back in the day on board Qantas flights.

Speed forward 30 years to the 1960s, and Chelsea, a current Qantas crew member stars in the vivid red uniform sported back then. “And welcome to the 1960s, also known as the ‘Jet Age’ when Qantas brought the world closer together,” she says in the video.

Qantas Chief Executive Officer Alan Joyce has praised the team for pulling together the video that is sure to capture the attention of future passengers of the airline.

“This safety video is a look back at the different styles of aircraft, service and uniforms that have been part of our long history,” he said. “And it calls out the contribution Qantas and its people have made to aviation, like the invention of the slide raft, as well as the nation carrier’s role in connecting Australia to the world.

“It’s really a tribute to a century of our people, the changing styles, and our innovation. The one thing that has never changes is our commitment to safety.”

And it’s not just the CEO who is proud of the video, with people across the globe congratulating the airline on reaching the 100-year milestone achievement and documenting it in such a way. Many have taken to Twitter to share their comments, with people calling it amazing and insightful.

“This is awesome,” @FATIIIAviation wrote. “Though, as someone who lives in Australia for most of his adult life, the last bit (from the choir singing I Still Call Australia Home) will make me quite emotional before every take off.”

When was the first time you flew with Qantas? How different is it to now?