‘Gerald Stone: The joys of breaking news ground with the legendary newsman’ 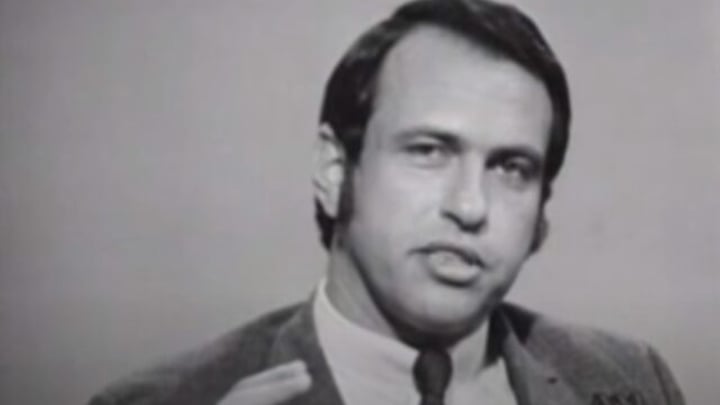 Gerald Stone in action for 'This Day Tonight' in 1971. Source: ABCLibrarySales/YouTube

The first revolution was crushed by Soviet Tanks. In the second revolution, Gerald Stone temporarily crushed the great Aussie taboo in Australian broadcasting — Never employ anyone with a ‘wog’ accent to report on air in Australian television. Anglo-Celtic accents were okay, but not the others!

Read more: We need a more diverse range of accents on Australian television

Well, Gerald Stone trampled on this taboo when he hired me and dared to put me on air some 20 times as a reporter on This Day Tonight, Australia’s national current affairs TV program on the ABC, between 1970 and 1972.

He even issued a press release in the Daily Mirror with the headline: ‘Hungarian voice breaks the accent barrier! … TDT has come up with another of its little surprises in debuting Andris Heks as a reporter with an accent as thick as the Hungarian Goulash’.

Gerald Stone took me under his wing. I feel privileged and grateful that for the first two years of my stint on This Day Tonight, I had the good fortune to work under his guidance, before he left the program.

It broke grounds, established the yardstick for and paved the way for all subsequent noteworthy TV current affairs programs in Australia, including its still running offspring, 7.30, A Current Affair and 60 Minutes.

In fact, all three were initiated by ex-This Day Tonight reporters. Amongst them, without any doubt, the most towering figure was the late Gerald Stone, or as we affectionally called him in This Day Tonight circles: Gerry. He passed away in November 2020.

He was the first person I met in This Day Tonight’s studio in Gore Hill, Sydney. He interviewed me for my job as production assistant/trainee reporter in December 1969. He hired me and I started my work in January 1970.

He introduced me to the executive producer, the late Tony Ferguson and the other, by now legendary journalists from Sydney, such as Richard Carlton, Bob Connolly, Tony Joyce, Tim Bowden, Caroline Jones, Peter Luck, Peter Ross, Paul Murphy and the anchor-man, Bill Peach.

It said a great deal about Stone’s willingness to innovate and to stretch the limits of diversity on a new national current affairs program that he took the risk of not only hiring me, but that for the first and last time in the history of ABC TV, he promoted me to be reporter with a non-Anglo-Celtic accent, to go on air during a period of the two years while he was a producer during my This Day Tonight days.

The only other producer on This Day Tonight who let me go on air occasionally was Tim Bowden, but he was rarely on, as he only filled in when the regular producers were away.

Later Gerry catapulted Jana Wendt, from Chech heritage, to become a star reporter with his Australian 60 Minutes. However, Jana had a perfect Aussie accent.
He continued his contribution to multiculturalism as the director of SBS in 2000 and then the deputy chairman on its board.

My first reporting assignment for This Day Tonight in early 1970 was an interview with Des Renford at Bondi Beach during his practise session there to prepare to swim the English Channel. As I ran down the beach to Renford in the water, we chose the song, ‘The Impossible Dream’ to play as the theme of the story that was broadcast.

But ‘The Impossible Dream’ lyrics were not only pertinent for Des Renford’s quest, it became a reality for Gerry and me too, as far as on-air reporting on an ongoing basis for Australian TV was concerned, with either an American or a European accent.

Before I joined This Day Tonight, Gerald was a reporter and arguably the most penetrating one on This Day Tonight. Everyone respected his formidable reporting skills, which were no less hard hitting than those of Richard Carlton. But there were complaints about Gerry’s American accent.

My first venture with Gerald on This Day Tonight was as his guinea pig in becoming the first non-Anglo-Celtic accented reporter in the history of Australian TV current affairs broadcasts debuting in reporting on air.

My second venture was to inadvertently involve Gerald in a speech, which led to newspaper headlines: ‘TDT is accused of Left Wing bias.’

A lecturer who supervised me in writing my Honours thesis in political science at the University of New South Wales a year before, contacted me to see if I would ask Gerald Stone to give a talk about This Day Tonight to a forum he was a member of in Sydney. I asked Gerry and to my surprise, he instantly accepted the invitation.

I went with him to the meeting to listen to his 30-minute speech, expecting it to be hard-hitting. But I was slightly disappointed how moderate his speech was. He was saying This Day Tonight was trying to encourage Australians to welcome diversity in unity, to contribute to making a ‘fair go’ a reality for everyone and to hold politicians to account.

I was more surprised therefore, that the reaction of the forum organisers to Gerry’s speech was to provoke headlines in tabloids like the Daily Telegraph and the Daily Mirror, citing Gerry’s speech as proof of This Day Tonight and ABC Left Wing bias.

“Why more ‘fair go’? Isn’t there enough of it now? Why should This Day Tonight want to advocate such, rather than just neutrally commenting on the news?” complained the critics.

The whipped up indignation eventually faded out. However, not before eliciting letters to the editors, many of which expressed appreciation of This Day Tonight’s record of advocating a fair go to all without fear or favour. For that, Gerald Stone, was much to be thanked for.