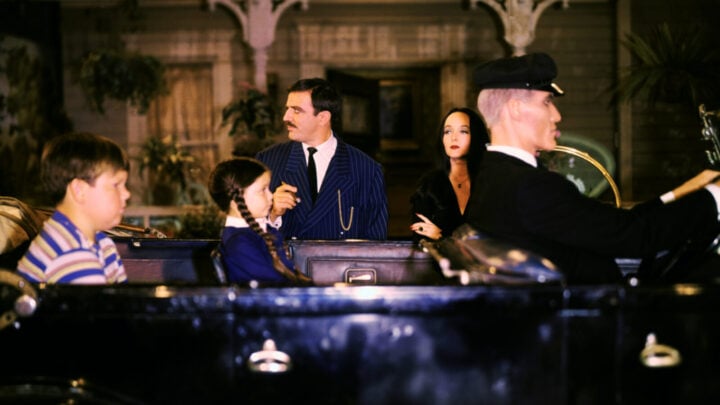 Go on, finish it off, you know you want to… I can almost hear the double finger click.

The Addams Family, based on the characters from artist Charles Addams’ New Yorker cartoons, launched in black and white in 1964 and ran for two years with 64 episodes (across just two seasons – wow) in total. The show was cancelled, supposedly, as The Munsters came out around the same time and general feeling was that the public was a bit over monster shows. (I don’t suppose anyone reading this knows who stole the mounted swordfish with the leg in its mouth from the set after the show was cancelled?)

The Addams’ family’s house at 0001 Cemetery Lane was an actual house located at 21 Chester Place in Los Angeles, but was demolished sometime after 1968.

Although they were decidedly weird, they presented as a tight-knit, loving and caring family … really not such bad role models for young viewers (aside from Wednesday and her headless doll Marie Antoinette, whose head was removed with a guillotine by Pugsley), especially compared with some of today’s prime-time viewing.

Gomez, of Spanish descent, a cigar smoker since he was five and a retired lawyer with seemingly endless amounts of money and investments, enjoyed nothing more than to crash and blow up model trains. John Astin modelled Gomez on Groucho Marx, giving up cigars when production ended. As he used to put the lit cigars into his suit pocket, the props department lined his pockets with asbestos. He is besotted with his wife and crumbles each time she speaks in French (or Yiddish or some other exotic language that Gomez thinks is French). Astin will turn 92 years old in March.

Morticia, the subject of his devotion, wears black form-fitting dresses with ‘tentacles’ along the hemline. Calm and quiet, she would cut out paper dolls with three heads, played the Shamisen, had a pet man-eating carnivorous plant called Cleopatra and beheaded roses, arranging the thorny stems in vases. The beautiful Caroline Jones, whose first of three marriages was to mega producer Aaron Spelling, succumbed to colon cancer at only 53 in 1983.

Lurch, all 6 foot 9 inches of him, summoned with a bell rope like a hangman’s noose, was the harpsichord playing butler with the incongruous feather duster. “You rang,” became part of the vernacular in many households. Interestingly, the actor, Ted Cassidy, had a cameo appearance as Lurch in an episode of Batman. Another early departure, he left us at the age of 46 due to complications from open heart surgery.

The beloved Uncle Fester was played by Jackie Coogan, who had been a child actor with Charlie Chaplin in The Kid. His mother and step-father had mismanaged his earnings so badly, leaving him penniless, that there is now a law named after him that stipulates 15 per cent of minors’ earnings must be put into a trust fund called a Coogan Account until they reach adulthood. Famous for making light bulbs work in his mouth, Uncle Fester fed his garden plants with blood plasma and collected $3 bills. His cannon, Old Reliable, was kept in his bedroom, and he boasted of having a “magnetic quality”. Coogan passed away at 69 from cardiac arrest in 1984.

Wednesday, so named because in the rhyme Wednesday’s child is full of woe, had a pet black widow spider called Homer and most (if not all) of her dolls were headless. The actress who played her, Lisa Loring, turns 64 this month.

Pugsley was originally to be called Pubert but the name was considered too sexual. He had amazing engineering skills and liked to steal road signs to put on the walls of his bedroom. Aristotle was his pet octopus. Yet another to exit the stage early, Ken Weatherwax passed away in 2014 at the age of 59 from a heart attack.

Grandmama, the alligator wrestling, broad-axe wielding, potion-making witch, was Gomez’ mother. To avoid confusion with Granny Clampett of Beverly Hillbillies’ fame, she was named Grandmama. The actress who played her, Blossom Rock, was born in 1895 and died from a heart attack at 82.

Thing, the disembodied hand that would appear from boxes, briefcases or bags had been Gomez’ companion since childhood and among other useful tricks, could turn grapes into wine in under a minute. It was usually the hand of Ted Cassidy (who played Lurch) although if both characters were in the room at the same time, one of the crew would do the job. As Lurch was so tall, he had to lie down on a trolley below camera line, mainly using his right hand, although occasionally he used his left hand to see if anyone would notice. “Why, thank you Thing,” Morticia would say, in her silken voice.

Oh and finally, some sage advice from Gomez on the three steps to attract women: “Raise your eyebrow, give a smile, and then, throw live wolverines at her. Works every time.”

Were you a fan of the show as a child? Who was your favourite character?