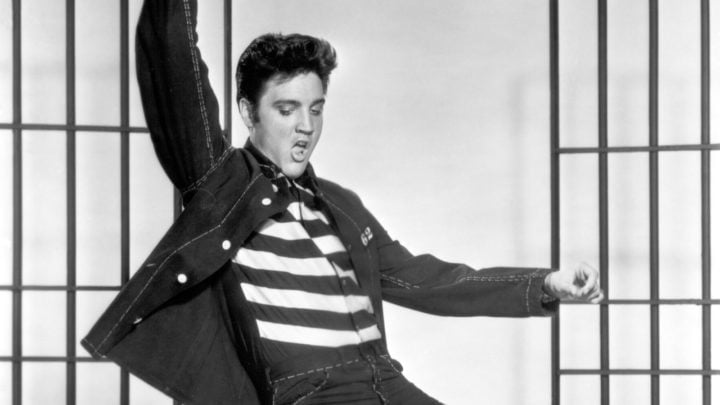 Elvis Presley in one of his most popular films, Jailhouse Rock. Source: Getty.

In anticipation of the Starts at 60 community’s upcoming trip to the Parkes Elvis Festival, we’re revisiting some of our favourite Elvis flicks.

Click here to learn how you can join the fun this January, or read on for a trip down memory lane…

While most people remember Elvis Presley for his unparalleled contributions to music, many tend to overlook The King of Rock and Roll’s incredibly successful acting career. As a man of many talents, Elvis first tried his hand at acting in 1956, which launched a colourful career that lasted almost 13 years. Out of the 31 films he starred in, here are just a few of the best.

This blockbuster was Elvis’ very first film and still remains one of his most successful. Described by the filmmakers as the “role he was born to play”, Elvis played Clint Reno the brother of a Confederate soldier who was involved in a train robbery. The movie was originally expected to be a B-grade film but after Elvis signed on, the budget expanded to $1 million and upgraded to A-grade.

Despite being the reason for the movie’s success, Love Me Tender was the only film he starred in where he wasn’t top billed. Instead he was billed third behind his two co-stars, Richard Egan and Debra Paget.

After going to jail for manslaughter, Elvis’ character Vince Everett, is introduced to the record business and once released, starts his own label and quickly becomes a superstar. Depicting the life of a massively famous singer was not a far stretch for the King of Rock and Roll, which is why his performance in this popular film remains one of his best.

The choreographer in the film had originally planned a more classical style of dance for Elvis to perform in his famous number outside the jail cells but when he realised it was never going to work he simply told Elvis to do whatever felt right. And so, the wildly popular dance to Jailhouse Rock was born.

This comedy was at one point Elvis’s most financially successful film with the soundtrack album spending 20 consecutive weeks in the number one spot on the charts. The film follows Chad Gates, a soldier who returns home from the army and rather than working in the family business, heads to Hawaii to work as a tour guide for his girlfriend’s agency. Funnily enough, Angela Lansbury played the role of Elvis’s mother at the age of 36, which was only 10 years older than Elvis at the time!

This classic film eventually eclipsed Blue Hawaii as Elvis’s highest grossing movie. It also starred the equally popular actress, Ann-Margret as his co-star and the pair actually dated for a short time during filming. In a role a bit further from his everyday life, Elvis played Lucky Jackson, a car racer ready to win the Las Vegas Grand Prix.

Much like Jailhouse Rock, the title track to Viva Las Vegas was almost as successful as the film itself and has become the unofficial anthem for the city of Las Vegas.

This film was one of the more dramatic stories that Elvis told on screen. The film followed the troubled character of Glen Tyler who heads to the country to receive counselling from love-interest Irene Sperry, played by Hope Lange. Originally the drama was not supposed to be a musical, but much like other films involving Elvis, songs were eventually written into the story for him.

In a film about every man’s dream, Elvis plays Mike McCoy, the lead singer of a band and a part-time race car driver who has three beautiful women all wanting to marry him. However, the film ends differently to every other Elvis film as he doesn’t get any of the girls but instead marries them off to other men so he can remain a bachelor forever.

This western film was the first movie where Elvis didn’t sing, in fact the only song in the entire film was during the opening credits. Surprisingly, Clint Eastwood was originally asked to play the main character before Elvis signed on. In an attempt to move away from the cheaper comedies he was so used to, Elvis agreed to being in Charro! but was disappointed when the script was rewritten prior to shooting to remove any extremely violent scenes.

Love the King? Our community of over-60 travel lovers will be visiting the Parkes Elvis Festival together in January 2022 on a fun-filled tour from Sydney. Learn more here.

How many of these these films have you seen? What’s your favourite Elvis movie?