‘A national institution’: Australia’s marching girls in the 1960s 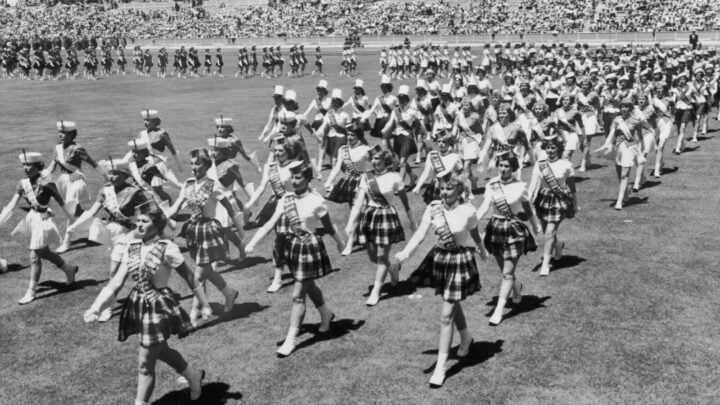 In June 1966, The Australian Women’s Weekly, the most popular women’s magazine in the nation at that time, devoted an eight-page spread and photo story to the marching girl phenomenon. “Every weekend, thousands of girls in every state of Australia don jaunty caps and short skirts, apply leg tan, pull on high white boots – and march,” the wrote. “They march through the streets, in parks and in playing fields. They march at football matches, carnivals, mardi gras, and fetes. A festive occasion in Australia isn’t complete without a team of marching girls these days.

“There are nearly 30,000. They take their sport seriously, their uniforms can cost more than $50, and they have become a national institution. They are Australia’s marching girls.”

According to the AWW story, the marching idea was brought to Australia from New Zealand in the late 1930s and became established in some smaller country towns before really catching on in the bigger cities in the early 1950s. Other historical accounts suggest the marching craze started here during World War II when drill sergeants and officers in the Home Guard provided instructions in march formations for keeping up workers’ morale and promoting physical fitness among young women. These instructions also included “military forms adapted to a more ‘feminine’ style, [while] brass and pipe bands provided the music”.

Whatever the beginnings, by the 1960s and ’70s, marching girls had become a national sport. Every weekend, thousands of girls turned out to compete for championship points, medals and trophies in local, state and national events. Teams were regularly asked to join local celebrations, street parades, pastoral and agricultural shows, civic occasions, and even to welcome royal visitors.

The rules were simple. Teams consisted of up to a dozen members (sometimes more), plus a leader, who issued commands with a whistle. The aim was to move as one, displaying discipline and energy. It was seen as a physically active sport, challenging rather than strenuous, requiring skill and focus rather than sweat and muscle. There was no specialist equipment required for a team to start, and membership often provided a real sense of belonging to a group.

Teams were responsible for designing their own uniforms, and compared with the school gym clothes or netball and hockey outfits of the day, the marching regalia was very attractive. It was designed to impress, with sharp angles and straight lines to really catch the eye. Tartans, epaulettes and lanyards adorned the uniforms with all manner of headgear, including busbys, cockaded hats and Glengarry bonnets, finishing with gauntlets or gloves and long white boots that flashed in the sun.

The names selected by the teams were as colourful as their outfits. There were Grenadiers and Cavaliers, Cadets and Guards, Kilties and Glennetes.

The popularity of marching as a pastime and fun activity grew rapidly in the 1950s and by the ’60s had extended its reach to an even younger age group. Initially it attracted young women of a working age group, but as time went on, school children began competing in junior competitions, and by the late 1960s ‘midget’ marching girls could also be found contesting at the national championships.

Former marching girl Carol Furphy writing on social media recently commented, “I personally would love to see the old format of marching girls make a comeback. It was fun teamwork. Got to travel to lots of places and – depending on how good your team was – you could even travel interstate. It was excellent exercise, gave your brain a good workout having to remember counting steps and movements. It instilled discipline, [taught you] how to care for your uniforms, [involved] following rules and regulations and being part of a club and association and a movement. Plus, you learned the importance of fundraising … most of all it was [about] just having fun!”

Many agreed, including Vicki Harris, who said, “It was like having another family and lots of friends who you saw every Sunday after training all day on Saturday.” There were vivid memories recalled of spending hours meticulously cleaning white boots and preparing uniforms to be absolutely perfect for the major titles. (You can read Starts at 60 blogger Julie Grenness’ account of watching the marching girls perform, here.)

By the late 1970s, marching had reached its peak and – like any sporting or recreational activity – it gradually began to lose appeal and popularity. Different weekend routines, competing recreational and leisure interests, changing career patterns and new and different opportunities for young women in sport all took their toll and, over the next decade, marching girls’ numbers began to decline. It still exists today but in much smaller numbers and without the major high-profile championships, medals and honours. But for those who took part and remember those halcyon days when marching girls strutted on the national stage, it’s a memory they will keep forever.

About Bob Byrne: Bob had a long career in commercial radio spanning more than 40 years before becoming a columnist and blogger at the Adelaide Advertiser. His first book Australia Remember When was published in 2014 and since then he has written four more books all based around the nostalgia theme. Book number six is to be published later this year. Bob’s books are available online at rememberwhenshop.com.au.

For another trip down memory lane, read our other nostalgia articles here.