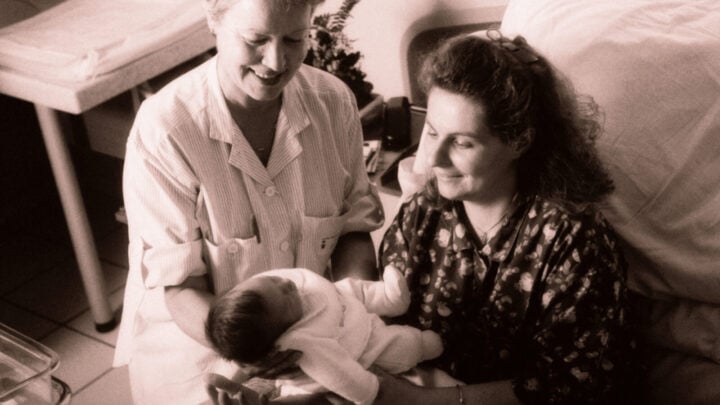 The midwife gave Mum her assurance that I was not going to have fame and fortune but just have a “lucky” life. Source: Getty (note: models posed for photo.)

They said I was born lucky. The facts became muddied as the years rolled on, but when I was 12, my mother told me more about the day I entered the world. The picture she portrayed for me felt so real I could almost see it, like a film. It was in England on a midsummer’s day, roses dropping petals in the heat. Gran had hated hospitals and insisted that my mum have her first baby at her house. The old brick home, built at the turn of the century, was polished and shiny – my Gran was fiercely clean – but the room was sticky with sultry heat.

The midwife had been called in early that morning. She had kind eyes but was a tough, forbidding woman who exuded efficiency. Crisply dressed in a white apron, she bustled about like a hornet, with bowls and cloths. My arrival was traumatic and the midwife had to fight to save my life. She put my lifeless body in the laundry basket at the end of the bed, thinking I wouldn’t survive. This was 1939 and there was no suction or life support then. “She tried to get you to breathe,” Mum recalled. “She went to her bag and brought out some brandy. She just put a few drops on your lips and you finally started to breath. She examined you and checked your weight. I was so weak but I managed to sit up and look at you. I noticed a small mark on your head, like a strawberry in your fine hair. I asked the midwife about the mark and whether you were too small. She said, ‘Don’t worry, she is fine.’ But I persisted, asking about the mark. ‘Stop fussing,’ was the terse reply, ‘it’s just a birthmark’.”

The midwife then said that I had been born on a lucky day, at a time when the heavens and stars were in tune. She gave Mum her assurance that I was not going to have fame and fortune but just have a “lucky” life. She then packed up her battered bag and left. “I was so happy I had you,” Mum continued. “And you thrived from then on. I will never forget that midwife though, she was quite a crazy old woman.”

When I was three years old, we had to get away from the bombings, so Mum took me to Cheddar, near Bath, where we lived on a strawberry farm. Dad was working away, building huts for soldiers up north. One lazy afternoon, Mum decided she would have a rest, as she was having a second baby by then. I spent long spells talking to the animals, patting the farm dog and swishing through the raspberry canes. Mum says she was woken by a clap of thunder and – in panic – she ran to find me as large drops of rain fell. A movement in the grass made her look towards the hill. “And there you were, amid a herd of young bullocks,” Mum recalled. “They were all sniffing you and  gazing at you. But you were just pulling at daisies, oblivious to the rain and the storm. Just a few feet away, a stump of a tree was smoking, it had been hit by lightning.” Was that experience a lucky one? If so, it was one of many I experienced.

I’ve lived an ordinary life, yet interwoven were rare moments where I felt I was blessed, just as the midwife had foretold. I count myself lucky in terms of the love I have had over 62 years with my husband, the countries I have seen, and my three healthy children. I had a serious illness and recovered – something protected me. The golden road I walk is not paved with riches, but whatever wave happens I survive. I know who I am and that I am in my allotted lucky space.

A footnote about my birthmark: it was very strange. It had a pink area and almost seemed to have tiny pips. No hair grew on it, so I always had to cover it with other hair. Luckily I had masses of curls. Mum reckoned I got it because she ate lots of strawberries while she was pregnant with me! When I was 70, I had to have it removed as there was a mild form of cancer on it. So it is gone. Happily, my luck has stayed. Just wish it involved a win on TattsLotto!

Have you ever had anyone predict your future accurately? Tell us about it.