‘History repeats: The Winter Palace, Kristallnacht and now the Capitol’ 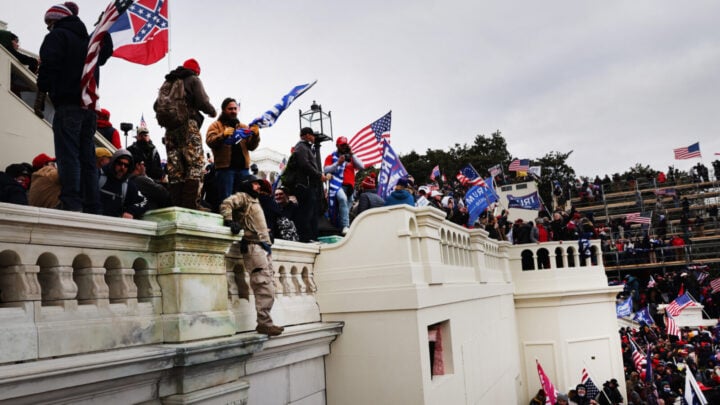 Commenting on Rod Wise’s January 7 blog ‘Fathoming the unfathomable as Washington turns into the Wild West’, a reader remarked that the US Capitol Building events reminded her of the Russian Revolution. Indeed, in particular, consider the Bolsheviks’ ransacking of the magnificent Winter Palace in Petrograd in 1917. Like Trump with the Capitol Building, Lenin incited his cult followers to besiege the power centre of Tsarism, the Winter Palace. By the time they left, the palace was in shambles, as the too-few guards were overwhelmed by the mob – just as they were at the Capitol.

But there is another sad comparison too: the infamous Night of Broken Glass (aka Kristallnacht), the beginning of the German Nazis’ vicious attacks on Hitler’s scapegoats, the Jews, on November 9 and 10 in 1938 in Austria. On those dates, Nazi paramilitary troops and mobs attacked and vandalised many Jewish synagogues, as well as committing further atrocities in Vienna, while the law enforcement authorities looked the other way.

The similarities of this shocking event to the build up to and the desecration of the US Capitol are remarkable. Several times over the past few months there have been dress rehearsals in the US for the coup attempt at the Capitol. On October 8, 2020, the FBI announced the arrests of 13 suspects accused of involvement in a domestic terror plot to kidnap Gretchen Whitmer, the Governor of Michigan, and otherwise violently overthrow the state government.

The Proud Boys vandalised churches of African American congregations only weeks ago. ABC News reported that on December 13 vandals tore down a Black Lives Matter banner and sign from two historic Black churches in downtown Washington and set the banner ablaze. Police said they were investigating the incidents at the Asbury United Methodist Church and Metropolitan AME Church as potential hate crimes, which one religious leader likened to a cross burning. “This weekend, we saw forces of hate seeking to use destruction and intimidation to tear us apart. We will not let that happen,” District of Columbia Mayor Muriel Bowser said. The leader of the Proud Boys, Henry ‘Enrique’ Tarrio, who admitted to the hate crimes, was arrested and charged on January 4 for being a main culprit.

On the same day, demonstrators claiming (without evidence) that the presidential election was stolen from Donald Trump, staged rallies in several US states, resulting in dozens of arrests, several stabbings and injuries to police officers. On that day, Trump’s supporters, carrying his campaign flags and signs, marched between the Supreme Court, the Capitol and downtown Washington, which was closed to traffic by police vehicles and dump trucks. Groups of the pro-Trump Proud Boys members and Antifa counter-protesters brawled in the heart of the national capital.

Subsequently, Glenn Kirschner, an American attorney and former US Army prosecutor, urged Joe Biden’s supporters not to demonstrate in Washington on Wednesday, January 6, to avoid risking injuries. They obliged. Kirschner tried to assure people that there were a number of law enforcement agencies in Washington, prominently including the National Guard, who had the power to easily protect security in Washington on January 6. So the only demonstrators present at Trump’s mass rally before he urged them to march on the Capitol were his own followers, prominently led by the Proud Boys. Beforehand, the police had banned the leader of the Proud Boys, then on bail, from entering Washington, but they hadn’t banned his followers, who poured into Washington en mass, together with other militia groups, fully equipped to invade the Capitol.

So a stunned world asks: in light of documented precedence and predictably grave risks of violence, how is it possible that a mob of enraged hooligans were able to break into and ransack the Capitol, one of the most sacred institutions of American democracy? How was this possible in the very heart of the most powerful nation in the world, which possesses a National Guard that could have easily averted this tragedy, which also resulted in five deaths and hundreds of injured people – including 50 police officers?

In regards to the National Guard, the delay in its intervention seems to have resulted from a monumental bureaucratic stuff-up. But ultimately it seems that it was President Trump who failed to order the National Guard to the Capitol in the first place to prevent the tragedy, unlike he did before the last Black Lives Matter demonstration. And shockingly, it is reported that he was enthusiastically watching the insurrection on TV and refused to send in the National Guard, even after repeated pleas from others. Surprisingly, it was Vice-President Pence who finally gave the order!

The Congress is now scrambling to hold President Trump responsible for his part in these atrocities and to remove him from office for being the greatest current threat to the US’ national security. It seems to me that they have at least three strong grounds for his second impeachment: one, his taped phone call to the Georgian Secretary of State, in which he committed the Federal and State crimes of demanding that the Secretary in turn commit the crime of falsifying the result of the Georgian Presidential election and steal enough votes from Biden to declare Trump the winner. Two, his filmed incitement of an enraged crowd to besiege the Capitol. And three, his failure to instruct the National Guard to surround the Capitol to prevent the insurgency in the first place on January 6, and then deliberately delaying them from moving in, resulting in the deaths of five people and injury to hundreds of others.

Do you agree with this comparison?