That old canvas smell of camping 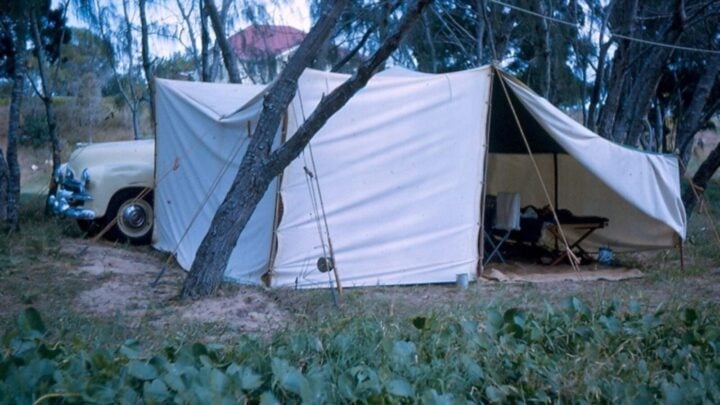 I have recently been on a road trip with my 21-year-old daughter, part of which included three nights in a tent at Byron Bay. Apart from finding out on the first night that the tent leaked (albeit a wee bit, but reminiscent of the water torture method from all good war comic books), we had a brilliant time. I will bet though, that when she looks back on it later in life, the smell of the tent won’t feature strongly in her memory as tents do in my childhood memories. A whiff of good old canvas is far more emotive than nylon (with a nice layer of new blue plastic tarp).

As Dad was a teacher, we disappeared every school holiday. Dad had made a timber box trailer and painted it to match the FJ. Both trailer and car were loaded to the gunwales with the white and green canvas tent and all the essentials, sometimes with the heavy old wooden boat and cane fishing rods, and we would head off to go camping. There were no fancy plastic ground sheets, just a large piece of hessian covering the floor, more to help keep the sand out of our beds than anything else. The poles were wooden ones that came apart in two pieces and the guy ropes held fast with enormous metal pegs and had a timber slider. There were always trenches dug around the tent and if it rained we were told not to touch the canvas as it would break the seal. I vaguely remember in my dream-washed sleep, mum and dad racing around digging more trenches and tying things tighter when it did rain. The bliss of being a sleeping child, totally oblivious to what was happening.

Dad had also made various boxes for storage or gas cooking, and a folding table which mum covered with a plastic tablecloth – we had some standards! Plates and cutlery were the ‘camping set’, a mish-mash of various bits and pieces that Mum could scrounge with the ever faithful peach lustre Fire King mugs doing duty for the endless cups of tea. If anything looked remotely useful Dad would say, ‘That would be good for camping,’ even if it wasn’t – it’s still part of our family vernacular.

My brother and I slept in army disposal stretchers that were heavy as lead, squished fingers when you were folding them up, and squeaked horribly whenever you moved, while our sleeping bags were heavy, cotton-filled green ones with hoods in which we used a flannelette liner bag to keep the outer one clean. It was a big no-no to get the bags wet as they took forever to dry out. Of course, without flyscreens, we were a veritable smorgasbord for mozzies and sandflies. We did have a mozzie net of sorts that helped out as did the Aerogard, which had done sterling service for Queen Elizabeth in 1963 in Canberra, so it must have been good.

After upgrading their car to an EH Holden station wagon in 1965, Mum and Dad decided it was time to buy a caravan. They bought a fiberglass 14’ Franklin Skyline which we lovingly called Casper. It was a gorgeous white egg that came with a red stripe around it which Dad promptly changed to a brown stripe to match the car (he also repainted the trailer brown and Mum made brown checked curtains for the EH). This of course meant we now had an annex that was green with ‘jolly’ striped edging. While my brother and I were still small, we slept in the van on a bed that appeared each night when the table was folded down. When we got too big, the stretchers came out again and we were relegated to the annex, which we didn’t mind at all. There was still the flurry of trench digging and holding the poles when there was a storm but this time, we were expected to help.

Facilities at camping grounds in those days were pretty basic. There weren’t nice concrete blocks to slide the van next to and often no power. Dad hooked up the 12V lights to the car battery and as long as there was a toilet, shower, and water we were more than happy. The van had a gas fridge and stove as well as a little oven although mum never used it – I think she was a bit nervous about it.  To avoid taking small children to the toilet at two in the morning (or for mum), we had a strategically placed ice cream container which Dad used to call the Ladies Auxiliary – I never got the joke until much later.

We still have Casper the van. It is still in pretty good nick and each time I open the door I am assailed by the smells of my childhood holidays. Even the cupboards have their own unique aroma.

After our first night at Byron when it rained, my daughter told me I talked in my sleep and said, ‘Make sure you don’t touch the tent walls.’  Lucky I didn’t sleepwalk and drag her out to dig trenches.

To read more nostalgia articles from Pam Van Der Kooy, head here. Or you can find her brilliant nostalgia book Stuff We Had in the 50s and 60s here.