Our love affair with Easter chocolate 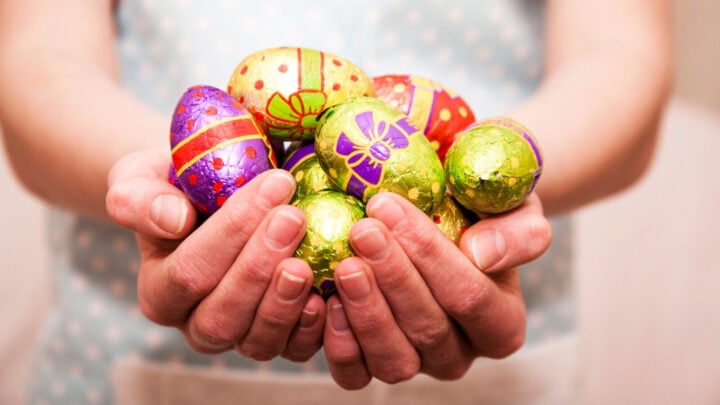 Red Tulip chocolates were started in 1939 by the Nassau family, Jewish immigrants who made the chocolates in their home in Caulfield. Source: Getty

It was not just at Christmas time that my brother and I dealt with the notion of ‘delayed gratification’. Being a good church going family, we engaged in character building on Easter Sunday as well, waiting until we got home from church before we could get stuck into the Easter eggs that we had found upon waking that morning.

I used to pray that the Easter bunny would make a cataclysmic mistake and drop off some eggs on Good Friday but he obviously had his diary well planned and it was always a chocolate- less, solemn day. Delayed gratification was enforced with my husband’s family as well, ensuring at least something sensible to eat before the rest of the day’s food intake went downhill, by insisting that you would get worms if you had chocolate before breakfast.

The eggs were usually the delightful tasting Red Tulip in the traditional egg shape. I don’t remember getting any fancy rabbits although a Humpty Dumpty egg complete with Beanies would sometimes appear.

Red Tulip Humpty eggs were first sold exclusively in Coles in 1965 and of course were made from the inimitable Red Tulip chocolate – the taste that we waited all year for. Red Tulip chocolates were started in 1939 by the Nassau family, Jewish immigrants who made the chocolates in their home in Caulfield. The company grew and established a factory in Prahran, moving twice then to end up in Port Melbourne in 1950 which is where their by-now famous Easter eggs were made.

Cadbury acquired Red Tulip in 1988 continuing with the Easter range but somewhere around 2013 the recipe changed and the flavour just hasn’t been the same.  I am sure I am not alone in this opinion (a previous petition on change.org would suggest so), and have to admit that chowing down on a rabbit’s head just isn’t like the old days.

Early chocolate Easter eggs, made in Germany and France in the early nineteenth century, were solid affairs. It took the Brits to add hollow chocolate eggs and chocolate bars to their list of life changing inventions – right up there with steam power and the electric light bulb.

In 1759, JS Fry (of Fry’s chocolate bar fame) was a Quaker who sold drinking chocolate and then started making eating chocolate in 1785, by mixing cocoa fats and cocoa powder with sugar. In 1795, his innovative son, another J, patented a method of grinding cocoa beans, using the Watt steam engine and launched into chocolate production on a factory sized level becoming the largest commercial chocolate producer in the UK.

Further development led to chocolate of the consistency suitable for a mould creating the first chocolate bar ever in 1847, opening the way for production on a grand scale. In 1866, the chocolate bar that is now the oldest brand of chocolate bar in the world hit the shelves – Fry’s Chocolate Cream.  Having got the consistency right for the moulds, the first hollow egg, using a mould, came out in 1873, complete with crocodile skin design to hide any cracks or imperfections.

Not to be left behind, Cadbury produced their first Easter egg in 1875. These first eggs were in dark chocolate with milk chocolate not on the scene until 1905. Fry’s Chocolate was another to fall under the scythe of more aggressive competition and was taken over by Cadbury in 1919.

Easter egg wrappers are still the lovely thin foil that spreads out so easily into a gloriously gossamer thin sheet that will slide in between the pages of diaries and special childhood books. Or you can follow our family tradition which has so far produced two balls of Easter egg wrappers each about 12cm in diameter that our girls have made with each successive year’s haul.

In the 1950s, William Horry, a cartoon designer working on protective cartons for light bulbs had his own lightbulb moment and realised that something similar could work for the fragile Easter egg.  This changed the face of the market allowing for variations and promotional opportunities – like the Humpty Dumpty egg.

Today, Cadbury Australia produces around 477 million Easter eggs and 14.6 million bunnies for the Australian and New Zealand market. Interestingly, while Australia ranks as the number one consumer of Easter eggs in the world, our overall annual chocolate ‘inhalation’ is only around 14th in the world. We just really love Easter eggs!!!

While the gorgeous native bilby has given a little shove to the bunny in the Easter stakes, I still think we need to develop our own Australian Easter genre sidelining the elegant bunny in his stuffy suit and top hat.

And so, I give you the bogan bunny, complete with a flanny shirt, ugg boots and a ‘rabbity’ mullet flowing gloriously between those ever so tempting chocolate ears.