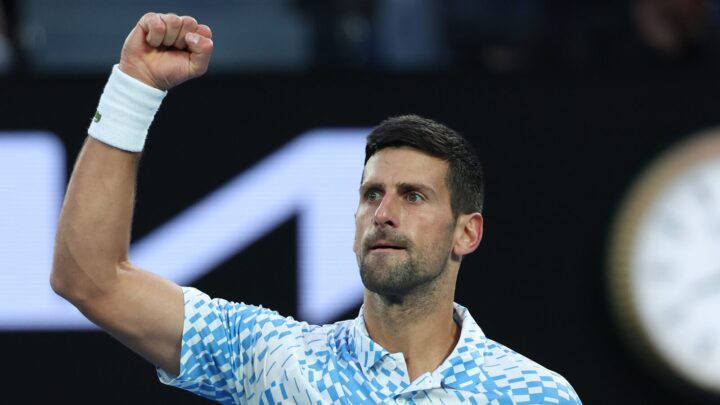 With the 2023 Australian Open nearing its business end, the question is pertinent, will the Djoker become the champion, for the tenth time?

The answer may turn out to be an emphatic “yes”, or perhaps “no”.

Djokovic came to Australia to round up his mouth-watering nine wins to ten after he was deprived of that chance last year –courtesy of his deportation.

The stakes are enormous for him:

Djokovic’s comeback to Australia took off well. The goodwill towards him was initiated by the current Federal Government annulling the three-year ban on his return to Australia that ensued from his deportation last year. And the door has kept opening ever more widely towards his victory this year.

Djokovic, to his great relief, was welcomed by fans when he first stepped out on court in the Adelaide International 1 this year. He cruised into the semi-final against Medvedev there without difficulties, but then an incident happened which could potentially sabotage his ability to win the Australian Open.

He launched to the side to return a ball and he apparently strained his left hamstring. He quickly sought medical time out, receiving physiotherapy and then he returned with seemingly good mobility to defeat Medvedev by two sets to love.

Medvedev was not convinced that Djokovic’s vague pain justified gaining medical time out and he mocked Djokovic by pointing to his own thigh as he sat on the bench. But in the final that followed, Djokovic had to struggle against his younger opponent, Korda.

He lost the first set and he had to save a championship point in the second set and had a medical time-out again, before winning against Korda to become the 2023 Adelaide International 1 Champion.

At the time of the writing, Djokovic has reached the fourth round of the Australian Open and will play Alex de Minaur next. He has reached this round with his left thigh heavily strapped and with a number of medical times out. But if his body holds up, he is expected to beat de Minaur in three or four sets.

It is also likely that his taking medical time out will continue, especially if de Minaur wins a set. But even if he goes past de Minaur, the road to winning the championship will then become increasingly difficult for Djokovic.

Several players in the remaining eight then may have enough all-around technical skills to seriously challenge him.

There are perhaps two main factors that may determine whether or not Djokovic will become the champion.

The first is the seriousness of his injury. If it does not deteriorate further, Djokovic may win. I watched Djokovic’s level of mobility throughout his third-round match against

Dimitrov and it appeared to be adequate. Indeed, without good movement, he may not have beaten his hard-fighting opponent in three straight sets. But if his hamstring injury progresses to become high grade, it will sabotage his game, no matter how much he would try to apply mind over matter.

However, if Djokovic’s body can hold up, then it is almost certain that he will go all the way.

The chance is that unless any of his opponents can finish him in three straight sets, once Djokovic wins a single set, even if it comes after losing the first two, he will win the match in five sets. Why? Because he has done this several times in Grand Slams whilst his current opponents do not have the experience of having even won a single Grand Slam.

Djokovic demonstrated time and time again that even when he is two sets down, he can step up his game to such a high level that he can overcome his opponents in five sets.

What also goes against would-be first-time winners in a Grand Slam against Djokovic is the likely disabling anxiety on their parts, as they get closer to victory.

That anxiety tends to become so high with players who have not won a Grand Slam before, that it is likely to prevent them from being able to serve out the match against a highly experienced and super-confident Djokovic.

So, perhaps Djokovic’s greatest remaining potential foe is his injury. Should it stay a low grade, he is likely to achieve his objective and win the Australian Open again for a staggering tenth time.