Will Kyrgios and Kokkinakis become the next Woodies? 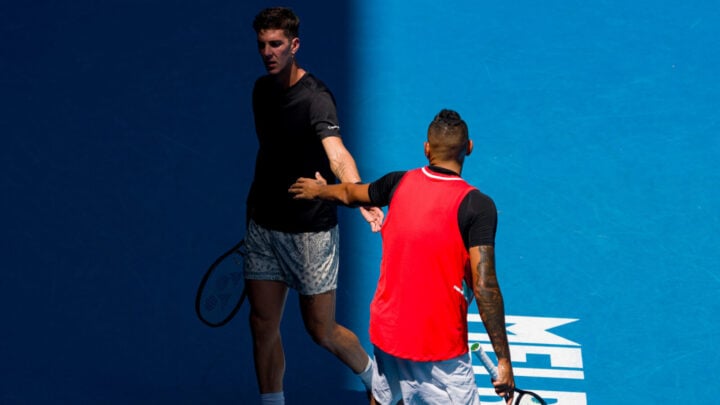 The Woodies – Australia’s doubles playing team of Woodbridge and Woodforde – were the most successful doubles playing team in the world in the 1990s. Since their split, Australia has not been able to provide any real match to them. Are we witnessing in Kyrgios and Kokkinakis, a double partnership that might remedy this situation?

Certainly, the KK duo had no difficulty in defeating the current doubles’ number one team at the Australian Open’s second round.
The Aussie wildcards eliminated top-seeded Croatians Nikola Mektic and Mate Pavic 7-6(8) 6-3 in an entertaining encounter.

Having established himself as a strong audience drawcard by his highly entertaining performances, Kyrgios announced last year that he wanted to continue his tennis career. But he also made it clear, that his main interest in tennis is having fun and to entertain. He is not willing to put in the amount of consistent hard work and highly disciplined lifestyle that all aspirants, no matter how talented, must pursue if they have any chance to get to the top and stay there for a while in individual tennis.

The three-won-sets for individual grand slam match victories require extraordinary concentration, consistently good play and fitness from the participants. When taken to four sets or even five, Kyrgios’s overall effectiveness tends to decline and he has lost matches several times even after having won the first two sets. After a couple of won matches, Kyrgios tends to run out of steam or suffer injuries.

If there was a prize in tennis for the most notoriously entertaining player on the field, perhaps Kyrgios would win hands down. Love him or hate him, most tennis lovers want to watch him play. When he is on the roll, he seems to be unstoppable. He interacts with the audience, sometimes asking their opinion as to where to serve and he can whip up the audience into a frenzy to support him. But he is also capable of becoming his worst enemy when he goes into endless negative self-talk or fighting with umpires.

While he is fresh Kyrgios can play magic tennis, doing justice to his enormous natural talent as a tennis player. Given his brilliant serve and his ball skills, playing doubles halves his workload on the court, and two won matches are enough to win a set even in a Grand Slam; it would be much easier for him to become a consistently high ranking doubles player than an individual player.

In his friend Kokkinakis, Kyrgios has a very promising doubles partner. Kokkinakis exhibited skills through his gritty win of the Adelaide International before this year’s Australian Open, which are critical for a high-ranking doubles player.

Paramount among these is consistency in firing powerful first serves which often become aces or end up in poor returns which are easy to score against. However, it also became clear that the hard work of a whole week of winning matches at the Adelaide International exhausted Kokkinakis to the point that by the time he had his first game in the Australian Open, the Monday after his Saturday triumph in Adelaide, he was a shadow of himself, a spent force.
Given his history of injuries, Kokkinakis, like Kyrgios, might have a much greater chance to do justice to his considerable tennis talents consistently as a doubles player.

So if K and K are willing to continue playing the Grand Slams as doubles playing team, they might have a good chance to follow in the footsteps of the Woodies as Australia’s next most successful male doubles players.

Best of luck to them in their Grand Final Match!

Are we witnessing in Kyrgios and Kokkinakis, a double partnership that might remedy this situation?