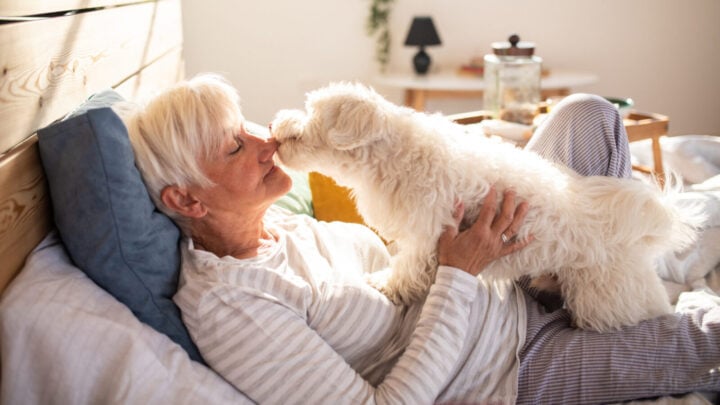 We all know about guide dogs for the blind but not everyone knows about assistance dogs for people with health issues. One of the Starts at 60’s bloggers, Grace Macdonald, has one such dog. I asked her to tell us about Coda and how she came by him.

“Coda came to me because I had lost my 15 year old Shepherd dog and both the cats and I missed her so much. Another dog was needed. Hence Coda, a kelpie dingo cross.”

Grace went on to say that for two years Coda was her shadow and “then the happy day came where a tumour sitting on my optic nerve was removed. It was leading to me going blind but not realising it.”

Grace then sought official certification for Coda to be an assistance dog (thus being allowed in places usually forbidden to dogs).  She said the process involved: “Letters from my neurologist, a copy of my MRI showing my little tumour friend, letters from my vet re. her temperament and never making a mess in the house. Finally, the head of the kelpie club certifies her being perfect with children. Took a few months but here she is, we are classed as a bonded pair.”

Coda learnt to assist Grace all by herself, amazing – and there was I thinking all assistance dogs had to go through similar training to that of guide dogs. Grace added that people are very curious about Coda because kelpies aren’t the usual breed in this situation. She also said that they’re surprised she doesn’t sit, as a lot of assistance dogs do when their human person sits.

“So I have to explain that she stands to get enough traction to support me if I move suddenly, even standing like a rock as I lean on her to stand up,” Grace told me.

It’s incredible the extent to which dogs go to in caring for their humans. My dogs certainly were of help to me when my companion, Pierrot, died suddenly one evening of a heart attack (I think there’s no need to speak of my emotions following the event of losing a loved one). The help from my dogs was on the practical side, simply by the fact it meant the next morning I had to get up earlier than usual to take them out for their morning walk. Pierrot had always walked them in the mornings and I did the late afternoons, and also round the garden last thing at night. Having to walk the dogs every morning from thereafter got me out of bed – they stopped me from pulling the quilt over my head and wallowing in the sadness of grief.

Sadly, two years later I had to make the decision to ask Charlotte, the local vet, to come and give assisted dying to Lili, a dog from the S.P.A. animal rescue centre. A stray, estimated by the centre to have been two years old when we took her in, living 17 years after that. The first year, following a visit by a farmer’s dog on the loose, she had puppies and we found homes for them all but kept back Petit Pat as he was a bit nervy. He is now seventeen and a half years old and according to the vets’ chart, that’s about 92 of our years, so he’s older than my 80 years.

He has been especially helpful to me throughout the pandemic lockdowns. If it wasn’t for him needing a morning walk, thus getting me to wash and dress and go out and about the village with him, I’d have lingered late in bed every day – although, of course, there are my two cats trying to stare me awake when it’s their breakfast time. They have been and still are a great help in getting me roused by scratching at window blinds and rugs on the floor. I think without the company of my household pets I would have sunk into a depression as, like so many others, I had been cut off from my family and friends for months on end.

Now, over to Sue who has had quite a few blogs published about her pets and her appreciation of their companionship but this time she has a sad experience to relate.

Animals are not just carers to humans, they are lifesavers. At least, mine are to me. I have two cats, Penguin and Smee, as well as two budgies, Jack and Jill. They all give me a reason to get off my butt and feed them, clean up their messes, and care for them.

On March 17, I had major surgery for a Stage II Squamous Cell Carcinoma on the right-hand side of my tongue. The tumour had to be removed by a surgical team and then rebuilt by the plastics and reconstructive surgical team. I also had a Follicular Lymphoma adjacent to my left clavicle removed. All whilst the anaesthetic team and theatre nurses kept me breathing for just over six hours. Twenty-four hours later, I was woken in the Intensive Care Unit and transferred to an ENT ward, where I could remain for eight torturous days.
I came home (against medical advice) on March 25, both physically and mentally hurting. It’s been the animals that have prevented me from sinking into depression because regardless of how crappy I’m feeling, they need to be looked after. Just like we did for our children, we now do it for our “fur babies”.
In return, they give me company and love. A reason to laugh, (and to chastise them sometimes), a purpose and a reason to continue to endure this very unpleasant turn of events in my life. On May 9, I began six weeks of daily radiotherapy. One thing I can be sure of, my little animal family will be at home waiting for me. Ready to sniff, snuggle, and walk all across my keyboard.
I live alone and have done for the last thirty years.  It has always been the animals in my life that have been the constant, through good times and bad. I have family, all caught up in their own busy lives. I have friends, near and far, whose constant support has helped me through some very tough times. But, in the final analysis, it’s my animals (and my computer) and me who will see me through all of this. They are my lifeline!
BloggersOpinionMedia
Share: