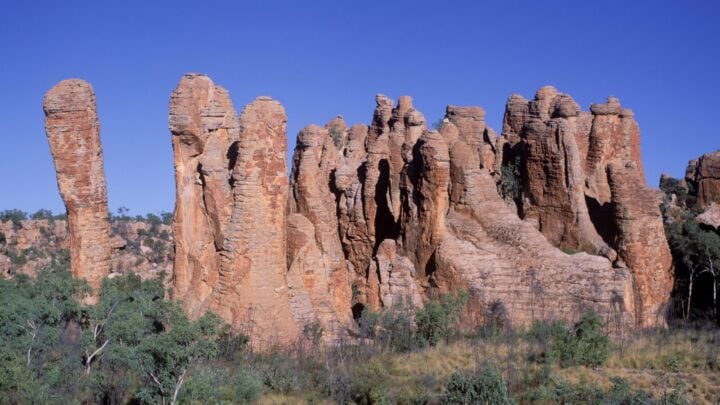 The Heartbreak Hotel at Cape Crawford is the gateway to the Northern Territory's 'Lost City'. Source: Getty Images

Should you travel the Savannah Way from Cairns, Queensland to Broome, Western Australia, be sure to stop at the curiously named Cape Crawford Hotel in the Northern Territory. The hotel is better described as a ‘roadhouse’ and is situated where the Tablelands Highway from the Barkley Tablelands meets the Carpentaria Highway. Cape Crawford is located hundreds of kilometres from the sea, named after Lindsay Crawford , the drover who discovered it. He thought the ancient and extended Abner Range resembled a Cape. It doesn’t!

The same drover discovered the ‘Lost City’ in the Abner Range in 1880 . The area was once an inland sea; millions or probably billions of years ago, water seeped into the rock and, over time, eroded it, breaking it into columns now resembling skyscrapers up to 25 metres high. The only way to access the Lost City is by helicopter. An optimistic pilot parked his helicopter in front of the roadhouse, but most of us grey and digital nomads have restricted budgets.

The Heartbreak Hotel is a collection of old and small cabins lovingly referred to as dongas. The dongas are small cell-like structures with a front verandah. Adequate for a one-night stopover but not for a four- or five-night holiday. There are a handful of newer en suite cabins. Generally, the buildings, the bar, restaurant, and amenities are old but clean. The women’s toilets and showers are painted pink and signposted ‘Priscilla’, and the male amenities blue and signposted ‘Elvis’.

Toni Tapp Coutts, a well-known Katherine identity and author, claims she dubbed the premises Heartbreak Hotel in the 1960s after the Elvis Presley hit in 1956. According to Tapp Coutts, there was an event one Saturday night where the ringers from nearby cattle properties overdid their drinking and brawling. The next day, there were a lot of sad and sorry heads.

ABC Rural is the proponent of a racier version involving an earlier owner bringing his bride back to the Hotel, and when he got on the grog, she ran off with a ringer. But the Toni Tapp Coutts version has a certain ring of truth and is supported by the aptly named toilets.

The hotel is an outback oasis. We planned to stay only one night as the reviews were mixed, but stayed three in our motorhome as the powered sites had green grass with big old trees offering shade.

Fuel is costly, but that’s not unusual in remote places. Distances add freight costs. The beer is cold, and the bar is relaxing and pleasant, and friendly.

The food is better than the usual roadhouse fare. Along the Savannah Way, here is some cautionary advice. Lower your expectations after you depart Cairns and the Atherton Tablelands, from Mount Surprise to Georgetown, followed by Croydon, Normanton, and from Camooweal through to the Northern Territory! This is prime beef grazing country. And yet, and yet, I pause because this baffles me: the roadhouses over cook steaks and sausages and char grill them to a crisp. It doesn’t make any difference whether you request your meat to be slightly undercooked.

Not so at Cape Crawford, the Heartbreak Hotel offers great food. The wild-caught barramundi comes from the Gulf of Carpentaria next door (in other words it’s local) and is to die for.

If the Heartbreak Hotel was near to big cities, it would be lucky to achieve two stars. But 400km from the Barkley Highway and 300km from Highway Inn on the Stuart Highway, the experience is worth four stars. Yes, it’s basic and the toilets and showers are old. But for a weary couple in a motorhome, in the middle of nowhere the experience was an oasis.

*A reference to Lewis Carroll’s novel Alice’s Adventures in Wonderland.