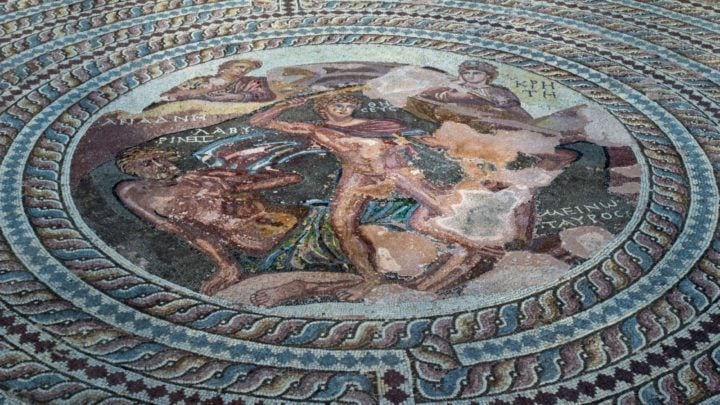 "It is alarming how little value is now placed on our history," writes Rod. Source: Getty Images

Most Australians of our vintage and background have a special place in our hearts for the game of cricket. My mother, who never picked up a bat in her life, was a fanatic about it. But even the greatest tragic can cry ‘enough is enough’, as happened to me recently when overdosing on the national team grinding down, like the proverbial heavy roller, another pack of unfortunates.

It was late one Saturday afternoon and I was trawling the screen looking for anything more rewarding than what was playing out on the cricket pitch. Then, quite by chance, I found myself transfixed by a documentary on that strange mythical creature, the half-human, half-bull Minotaur of ancient Crete. The general theme of the program was that many of the fantastic myths we grew up with as kids probably owe something to a kernel of truth which, over time, was embellished and transformed — in the oral troubadour tradition before the advent of written history. The Iliad and The Odyssey of Homer are thought to have evolved from this tradition long before being put to paper in about 700BCE.

As a great embellisher of tall stories myself, I am rather sympathetic to this approach to understanding history; for example, I have sometimes wondered whether the improbable biblical story of Jonah and the whale might have grown from a more probable episode, such as that of a devout man who, having escaped from the jaws of a shark, gave thanks to his God for this unexpected deliverance. Who knows?

But it wasn’t the shark or the Minotaur that stirred me as it sat glued to the box; it was the fate of Minoan civilisation itself. Here, we saw a highly developed culture whose power and influence extended over much of the then known world, suddenly vanishing without a trace. But why and how did such a cataclysm occur? Was Crete conquered? Was there a catastrophic epidemic? The history books of my school days could only speculate.

Yet on Mythical Beasts Unearthed, a Greek archaeologist scouring the ground around the ruined Minoan capital, Knossos, found tiny particles of pumice stone. Pumice, the feather-weight residue of cooling lava from an active volcano, was evidence that could not be ignored. He told us 3,500 years ago the volcanic island of Santorini, a hundred kilometres away, did erupt, creating tsunamis at least 50 metres high and powerful enough to fatally weaken, if not destroy, Minoan civilisation.

For the first time since Arthur Evans began excavating at Knossos 120 years ago, are we now closer to understanding, finally, how and why a superior civilisation could virtually cease to exist, in effect, to be gone with the wind?

It got me thinking. The Minoans were superseded as the dominant force in the Mediterranean world by the Mycenaean Greeks (the ones who sacked Troy, according to legend) and they, in turn, evolved into the Greeks of Athens, whose democratic sentiments laid down much of the humane foundations of the world and society we are familiar with today. And, from there our culture deepened as the Romans added the virtues of organisation and administration, the Arabs mathematics and architecture, plus many others over the ensuing centuries.

It seems to me that that is the essence of civilisation, that it is not fixed, but is a journey that goes on, picking up new ideas, refining them, replacing the outworn ones, so that the world we live in today would be unimaginable to those Minoans of 3,500 years ago. But we, looking backwards, can trace clearly how we got from there to here, if only we had eyes to see it.

For it is alarming how little value is now placed on our history, both from those who want to freeze it as a permanent monument in time and place and those who can only see the monstrosities that were committed by its agents. It is both, I believe, for our history encompasses the rise of Athens and the fall of Athens, the power of the Roman Empire and its over-running by the barbarian hordes in the fifth century.

In our own time, it encompasses Bob Marley and Stalin, to quote Father Dougal Maguire in an episode of the sitcom Father Ted. And let us not forget ‘Dear Uncle Adolf’ — and, whether we like it or not, he is integral to our journey, embodying in his dark, satanic self, an awful reminder of what can happen if we wander too far from the illuminated path of human history.

It was the motor vehicle mogul Henry Ford Senior who launched the first major corporate attack on the value of the past, when he raged, in 1916, that “history is more or less bunk … the only history that is worth a tinker’s damn is the history we make today”. Perhaps, if he had looked at the booms and busts of the past, he might have anticipated the Great Depression just around the corner, the one that nearly wiped us — and the Ford Motor Company — out for good.

Unfortunately, the nihilistic ideas of Henry Ford seem to have found a new lease of life in the 21st century. History, as a vibrant discipline we can learn from, has been trashed in our schools on the altar of closing our ears and eyes to all but a feel-good living in the moment. “Nothing to see here,” our political leaders remind us, and many of us take them at their word.

Meanwhile, we are doing exactly what our parents or grandparents did in 1930 when confronted with the storm clouds of economic ruin, by tightening their belts, beggaring their neighbours, obsessing over deficits, all to make sure the depression doesn’t wash up on their own personal doors, while voting for miserable penny-pinching policies that ensure it ends up on everyone’s doorstep. A state of affairs that, ultimately, required the hatred and destruction of a world war to bring us back to some sanity and stability.

Do we really have to go down this path again? The Spanish philosopher George Santayana wouldn’t want to, having written that those who forget their history are doomed to repeat it.