‘The polls underestimated Trump again, but can he hold onto the White House?’ 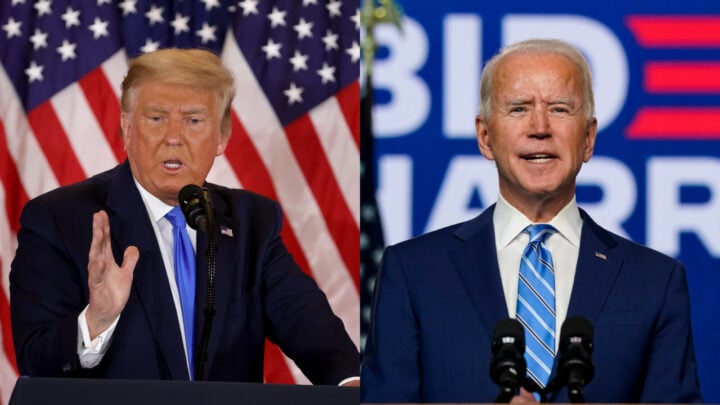 Forgive the mixed metaphor, pardon the mangled prose, but as the dust settles on yesterday’s US election, so the picture is becoming clearer. When I retired last night, my instincts assured me that Joe Biden would claw back enough pre-poll votes in the Rust Belt to eke out a victory, but that instinct was to be sorely tested by Donald Trump’s hissing AEST 2am press conference.
The words that subsequently echoed around our twilit house were “fraud” and “steal”, plus the kind of vituperative descriptions of Democrats that you would naturally ascribe to any “sad people” who would, indeed, perpetrate a fraud by stealing an election.

But when I awoke, it was not to the big news that Biden had made sufficient gains to edge ahead in Wisconsin and Michigan (two states which cost Hillary Clinton victory in 2016), but that the Republican grandees had finally intervened to draw a line in the sand between (relatively) orthodox conservatism and the somewhat primitive version called Trumpism.

The vehicle for a gathering chorus of “slow downs” was that most unlikely of compliant Trump apologists, Senator Mitch McConnell, the US Senate majority leader from Kentucky, who made it plain enough that there was going to be no ranting about fraud and no wholesale obliteration of uncounted votes (which Trump had appeared to be hinting at) but rather that any subsequent litigation would be conducted within the purview of due process and the rule of law.

Very Dwight Eisenhower-ish, if I might make an observation. And very calming to US allies increasingly nervous about the wildness of so many utterances emanating from Washington as the election race tightened.

At this point I think it useful to bring on stage The Mooch, aka Anthony Scaramucci, who set a world record for the shortest possible stay in that most unenviable of roles, White House communications director under Trump.

The Mooch is a very funny fellow, as anyone who saw his interview at the hands of the ABC’s Conor Duffy, can attest. But the Mooch is also a very severe critic of the present incumbent of the White House, while also a life-long Republican who believes that the Republican Party establishment has failed to clearly differentiate itself from the crudity and divisiveness of Trumpism.

I think he might regard McConnell’s intervention as one that had to be made, so out of hand was American politics spiralling under President Trump, but I am sure The Mooch would add the caveat that we might have all been spared so much angst if this stiffening of Republican backbones had occurred three years earlier.

At the time of writing, the electoral college vote has stalled at 264-214 in favour of Joe Biden and the national popular vote has the Democratic challenger 3.5 million votes ahead of Trump. As I write, Biden is only six votes short of securing victory, with Nevada, Pennsylvania, North Carolina and Georgia still in play according to most observers.

As it happens, we won’t be getting any more reliable figures on the remaining races any time soon and, indeed, the Nevada electoral officials have said they will not release any new numbers (where Biden retains a lead over Trump) until AEST4am Friday.

But it got me thinking. How is it that Nevada is so tight when in every US election in which the Democrats are competitive, Nevada is one of the few non-coastal western states that consistently votes blue? And then I turned to Florida where Biden accrued even less votes than Hillary Clinton did in 2016, with Trump increasing his share from 49 per cent to a clear majority of 51.2 per cent.

And so I turned to New York, which no pundit had bothered to look at because its Democratic majority was, as usual, so heavy and clear-cut. But, like Florida, Biden’s vote was well below Clinton’s of four years ago, down from 59 per cent to 55.7 per cent. And this in a blue year! And here, I believe, may lie the sleeper (or at least one sleeper) as to why Trump polled so much more strongly than all the pre-election surveys suggested he would.

The pundits were so distracted by the noisy, colourful demonstrations of Miami-based Cuban-Americans supporting Trump’s raucous anti-socialist rhetoric that I believe something at least as important slipped under their radar altogether: the Jewish vote.

As most observers of polyglot America know, there is a huge Jewish vote in New York City and its suburbs, but there is also a substantial bloc of transplanted New York Jewish retirees in Florida, dominating the suburbs north of Miami, and a growing concentration in Nevada. Trump’s deliberate identification of himself with Israel’s future by supporting controversial settler programs in the Occupied Territories plus the frantic photo-ops of new relations being brokered between the Jewish State and a couple of small Gulf emirates, must have had more to it than showing off the president’s photogenic left profile.

He would have obviously written off New York but for a man who has shown no particular fondness for the hard work of the presidency, to have put so much effort into Israel and the Middle East, there must have been an important, even vital, purpose in mind. And I think we might have found it, because as the pundits kept repeating on the night, Biden could win the presidency without Florida but Trump couldn’t.

So there you have it, with the lawyers bundling up their briefs to head for the courts and the poll counters rubbing bleary eyes before opening another tranche of votes. My take is thus: Biden lost a big chunk of Jewish votes, attracted by the president’s Israel-friendly stance; Trump lost a bigger chunk of middle-class suburban women, outraged by his vulgarity, and Biden managed to win back few white, blue-collar males where it mattered.

We’ve seen similar occurrences in Australia where Labor has been forced to contest with the rise of One Nation in its old industrial heartland, and the Coalition parties have tried to claw back lost ground in the same disaffected demographics.

It’s a problem in the changing panorama of advanced western countries, where the supremacy of “identity politics” with all its attractive, media-friendly sound-bites, also conceals the real, bread-and-butter issues that usually define the outcome of any election, in deciding who wins and grins and who can go please themselves. Not surprisingly, the US election failed to highlight any way out of this existential dilemma.

Who do you think would make a better president?