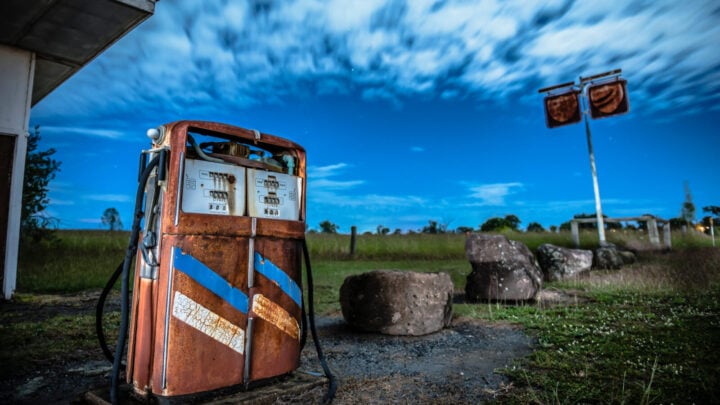 The changing face of petrol stations are quite the memory-jerker. Source: Getty

Petrol stations have always played an important part in how we get around, and their competition for our business has created changes in the tactics or gimmicks they have employed.

These days petrol stations combined with branded take away, coffee, or convenience stores seem to be popping up everywhere, but I would argue that per capita there were more servos around in the 60s and 70s particularly on the routes on the way out of town. On one three-mile stretch between Brisbane and the Gold Coast, I can clearly remember twelve servos vying for my business. The same stretch now boasts three.

The sheer number of petrol outlets chasing the day-tripper dollar meant that proprietors had to get inventive to attract passing trade. Fuel price wars hadn’t yet started so the now obligatory pricing signage wasn’t a factor. Instead, the early 70s saw a flurry of ‘big’ things stuck outside the servos. Giant cowboys, animals, and even petrol bowsers. Some looked professionally built while others were improvised by stacking old 44 gallon drums to heights of 4 metres or more to create bizarre advertising sculptures. Some went all out by making the servo itself stand out. At Stapylton, halfway to the Gold Coast, the station was built to resemble a flying saucer complete with a little green man peeking out from above the bowsers. Yet another at Beenleigh had a mini animal sanctuary with kangaroos, cockatoos, and snakes behind the station for kids to visit while mum and dad fuelled up and bought snacks from the attached shop. Another tactic involved having a staff member in a costume (one Esso servo had a guy in a tiger suit) standing as close to the road as possible frantically waving in potential customers.

These gimmicks faded, and the servos turned to include a greater range of products and services to entice customers. The manager of the Rochedale Total petrol station I worked at part-time for a few years was at the forefront of this trend. He added trailer hire, crates of soft drinks, a rack of sunglasses, and even a dedicated stand for handmade moccasins in a range of sizes and colours. One of his big sellers for a short time was the plastic wavy hands that seemed to be suction capped onto the back window of many cars in the late 70s.

In some states, a roster system was introduced for metropolitan petrol stations to open on Sundays. I am not sure if this was to share the economic benefits of increased day tripper petrol consumption on weekends or to give station operators an occasional weekend break. The result was that your first port of call on your way out for your Sunday drive was to stop at the newsagent to get the Sunday paper that published the current roster. If you were a thrill seeker who hadn’t filled up during the week and didn’t want to buy a paper, you could chance running out and risk being embarrassed and stuck sitting outside a closed station with an empty tank.

Before self-serve petrol, there were attempts at selling petrol without the need for staff when coin-operated bowsers appeared at some locations. This got around the roster problem as long as you had enough 20 and 50 cent coins. $1 and $2 coins didn’t exist, and the pumps didn’t accept banknotes. Occasionally you would drive past one of these stations and there would be queues of cars going around the block. It was only when reading the newspaper the next day that it turned out the coin machine was malfunctioning, and the pump was paying out in gallons of free petrol. Despite the absence of social media and mobile phones word soon got out and the poor proprietor was left out of pocket.

The changing corporate face of petrol stations saw many petrol brands disappear with some returning later. Brand casualties included Esso, Amoco, Golden Fleece, Neptune, Total, and even the short-lived Jap Gas which had very basic facilities and sold itself as a budget alternative at the beginning of the price wars. One long-defunct brand, Ampol, has recently been resurrected with its appeal to nostalgia and Australian pride.

Obviously, the greatest change to petrol stations was the introduction of self-service pumps. Previously, you sat in your car while someone pumped the fuel, cleaned the windows, checked the oil and tyres, and even took your money and trotted back with your change. Now you get to do the lot yourself. I find the disappearance of driveway service for petrol strange when you consider all the other businesses that have converted to drive-thru. I’m thinking coffee, take-away food, dry-cleaning, and more recently groceries as well as Covid-19 testing, and vaccinations. I did see a full-service petrol station recently on telly, but to qualify you had to drive a souped-up car at breakneck speed around a Bathurst racetrack for six hours.

What is the biggest change you've noticed in petrol stations over the years?