‘The carnival is over: The Seekers are such an awful blast from a long-buried past’ 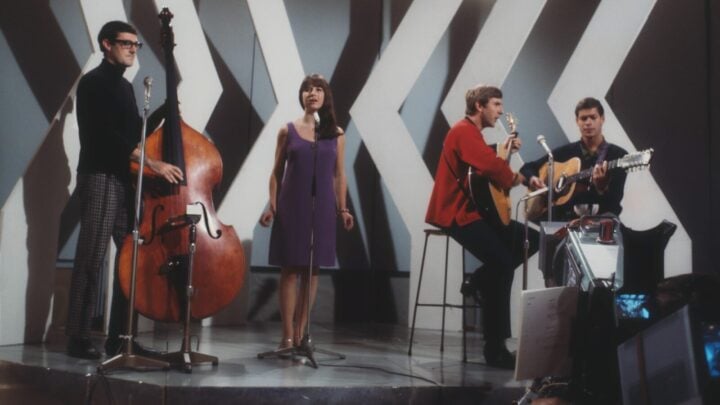 The Seekers performing in London circa 1965. Source: Getty Images

I wonder sometimes why it is that some things annoy me while others do not. I don’t think it has anything much to do with their relative importance, or with deeply-ingrained opinions I might hold or experiences I might have had. Why is it, for example, that I groan whenever a certain hirsute Sky presenter appears on my television set, while the bumptiousness of Alan Jones whose enemies are legion, washes over me like foaming mouthwash?

I reflected on this conundrum lately as I glared, for the 20th time, at a TV ad promoting the sale of CDs of 1960s folk group The Seekers, wondering what it is about them that really gets up my nose. After all, they are not inherently offensive, their ‘music’ is also inoffensive, spectacularly inoffensive even, they don’t carry with them a shedload of offensive personal baggage. So, what is it?

Growing up in the bubble that is Sydney’s North Shore, I learned over time the stresses and strains of the real world outside rarely intruded into one’s predictably comfortable, ordered way of life. Therefore, The Seekers could blend easily into such an unchallenging environment in a way that the early American rockers could not and later British bands barely did.

Thus, in my late teens, I rather liked The Seekers, finding them tuneful, harmonious, smooth, unblemished, to the point that I even bought tickets to see one of their concerts in Canberra in early 1966. Yet, so bland were they that they virtually segued out of my social awareness immediately afterwards … until very, very recently.

My first reaction to the bombardment of their television ads was that the group had sold the rights to their music to some ‘entrepreneur’ who was hell-bent on making a motza while their name was still remembered in a few, greying corners. (For I had once worked with a compositor who made a very tidy living on the side doing just that, buying up the Australian rights to defunct British bands like Dave Dee, Dozy, Beaky, Mick and Titch.)

Then I wondered whether, like poor old Shirley Strickland and her Olympic medals, some terrible medical emergency had struck one of their number and they needed to cash up as quickly as possible. Then I grudgingly accepted that the answer probably lay in the usual suspect, an utter refusal to accept that time had moved on and the gig was over.

I wondered about that. As some will remember, Athol Guy, apart from twanging the double bass, was a Victorian State Liberal MP for about 10 years. That, in itself, would not have bothered me much as I grew up in a Liberal heartland with a cousin even becoming deputy premier of Queensland under Joh Bjelke-Petersen. I had to admit that there might be more to it than the colour of Athol Guy’s politics.

For our generation, the defining event was always the Vietnam War and while many of us accepted its logic in the early years of that conflict, after the Tet offensive of January 1968, very few did. That’s not to say that within a certain ideological framework, you could still make a spirited defence of the Australian commitment. I remember, long after the war had ended, engaging in robust debates with acolytes of Bob Santamaria’s National Civic Council who could never admit to a smidgeon of doubt about the wisdom of that venture.

But their spirited defence of that war was always based on human considerations or their peculiar idea of geo-political realities, as if Joe Stalin were still alive and the Kremlin was pulling all the strings. It was rarely cheap point-scoring against polemical opponents.

Curious, I searched online to see whether Athol Guy had had the same Damascus Road revelation about that conflict that had afflicted so many of his contemporaries, from prime minister John Gorton down. My search revealed little of substance, but what did unsettle me was a favourable reference Guy had once made to the words of the late-Australian foreign minister Paul Hasluck, words that seemed to imply what offended Hasluck most about the anti-war protesters he faced was not the illogicality of their opinions or the disloyalty of their real intentions, but the sheer grammatical stupidity of their placards and slogans. Surely not, Athol, I wondered, surely you couldn’t define yourself by something as shallow as that?

Whether fair or not, Hasluck’s views seemed to be a throwback to the repugnant snobbery of my childhood, to that bubble of self-satisfaction, which thought it could hold the whole disturbing world at bay forever. More pertinently, I think I glimpsed an insight into why I might now find The Seekers such an awful blast from a long-buried past.

To my ear, when The Seekers’ songs are played, I feel I might as well be listening to a barber-shop quartet of the 1890s, so custardy four-part harmonious that if the group had recorded ‘When You Were Sweet Sixteen’ or ‘On the Banks of the Wabash’, all that would be missing would be the boaters and the waxed moustaches. In short, that nothing had changed in Seekersland since about 1895, that what I was listening to in 2021 was an echo from a time warp totally sealed off from the tumult of life in the 20th century. That nothing humanity had experienced since then seemed to have seeped into the soul of their music.

I don’t believe that could be said of most of their contemporaries, ranging from the equally harmonious Beatles to the singular Harry Nilsson. For example, one has only to compare the Beatles of ‘Love Me Do’ and ‘Please, Please Me’ (1962-63) — very Seekers-like — with ‘Eleanor Rigby’ to recognise the growth and complexity that occurred in just three years.

Now, The Seekers can sing whatever they like, so I suppose what I am really annoyed by is how easily some people prefer to cocoon themselves in a fantasy world soaked in the schmalz of Andre Rieu or American family sitcoms of the 1950s. Rather than facing up to the jangling rhythms, and unsettling yin and yangs of life as we really find it.

Should anyone doubt me, I suggest they obtain a copy of Pleasantville, the 1998 Tobey Maguire-Reese Witherspoon movie. It shows, quite movingly, that although one can find a kind of safety in certainty and sentimental slop, the price to be paid is your isolation from the promise, and pratfalls, of real life. It’s all there in black and white. And colour.