‘Spin the bottle and other kissing games’ 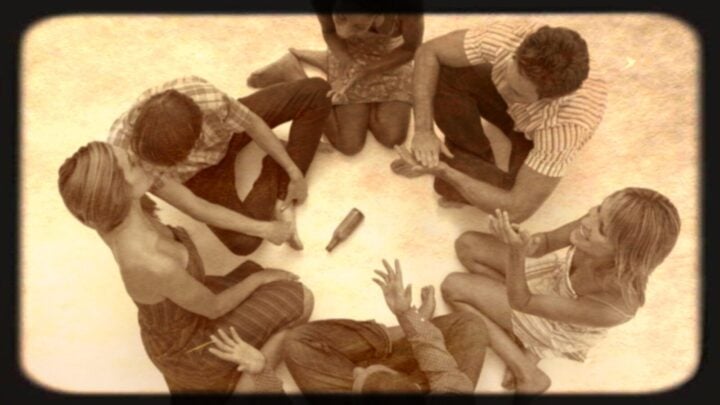 Mary writes about the not-so-sexy kissing games she played in her tweens and teens. Source: Getty Images

Growing up, there were many sexual rites of passage into adolescence. They were all pretty innocent, allowing us to practise our foreplay skills until we entered the dating scene.

During the holidays, there was mistletoe. If you were lucky, standing under the mistletoe resulted in a quick kiss from a secret admirer. But at my mother’s parties, it was usually Uncle Charlie who planted a wet one on me, his arm cradling my rib cage, hoping to get a little more action.

When it wasn’t the holidays, we didn’t need mistletoe for kissing. A game I fondly remember was Spin the Bottle. Remember that game? We got started when we were in sixth grade (around 11 years of age).

Sitting around in a huge circle, someone would spin the bottle, and if you were fortunate, that thick Coca-Cola bottle would point toward your crush. Then you’d both lean into the centre of the circle, embrace awkwardly, and provide lip service.

Often, you’d get stuck with some guy with cooties. Of course, at that time, if you landed on the same sex, you had to spin again.

Sometimes the boys would get bold and try a little tongue action, but that really grossed me out. I had already asked my older sister about French kissing, and when she explained it to me, I almost threw up. Who wants some greasy guy trying to tackle your tonsils when you’re 12?

A more extended version of Spin the Bottle was 7 Minutes in Heaven. According to Wikipedia, this game was first played in Cincinnati in the early-1950s. Two people would go into a closet, or some enclosed space and do whatever they liked for 7 minutes. This game became really popular in junior high, and I remember playing it all the time at a number of parties.

You’d either spin a bottle, or draw cards to see who would become your lucky partner. One time, I got stuck with some guy who really turned my stomach. Thankfully, the light bulb was broken in the closet, so we spent most of the time trying to repair it. Nothing like being saved by electricity!

We also played Truth or Dare, which would often take an interesting turn. One player would start the game by questioning another player.

If player two chooses ‘truth’, then player one would pose an embarrassing question that player two had to answer. Sometimes we’d ask things related to romance, but sometimes things would get far more personal, like asking about bra sizes, falsies, or various sexual escapades.

If player two chooses ‘dare’, then player one suggests an embarrassing task, which player two was required to perform.

Some of our dares included various kissing activities, or doing something really gross like eating weird food from the kitchen. Catsup, peanut butter and pickles made for an interesting combination. If you were more advanced sexually, sometimes you were asked to display your rash of hickeys.

Both players would then switch places, and the game would continue.

Another game, I heard about was Post Office. This was very popular in the ’40s and ’50s, but it has been referred to in popular culture since the 1880s.

The group was usually divided by sex into two groups. One group went into another room, usually the bedroom, which was called ‘the post office’. To play, each person from the other group would individually visit ‘the post office’. Once there, they would get a kiss from everyone in the room. They would then return to their original room. Once everyone in the first group had taken a turn, the other group began sending members to the first room.

I’m sure a number of kissing techniques developed from this activity, along with several versions of the flu, mono or the common cold.

Kissing Tag was another game, although I didn’t play it. Apparently it’s like regular tag, but when you caught someone you had to kiss them. Personally, I preferred to run rather than kiss. It was a much more athletic activity.

Another fairly innocent game was something called Suck and Blow. I wonder who came up with that name? Apparently you would pass a piece of paper by mouth using only suction. If you goofed, you would end up kissing the person who passed the paper to you.

Too bad you couldn’t use it to exchange notes in junior high.

Ah, adolescence! Those were the days!

Did you play kissing games in your tweens and teens?